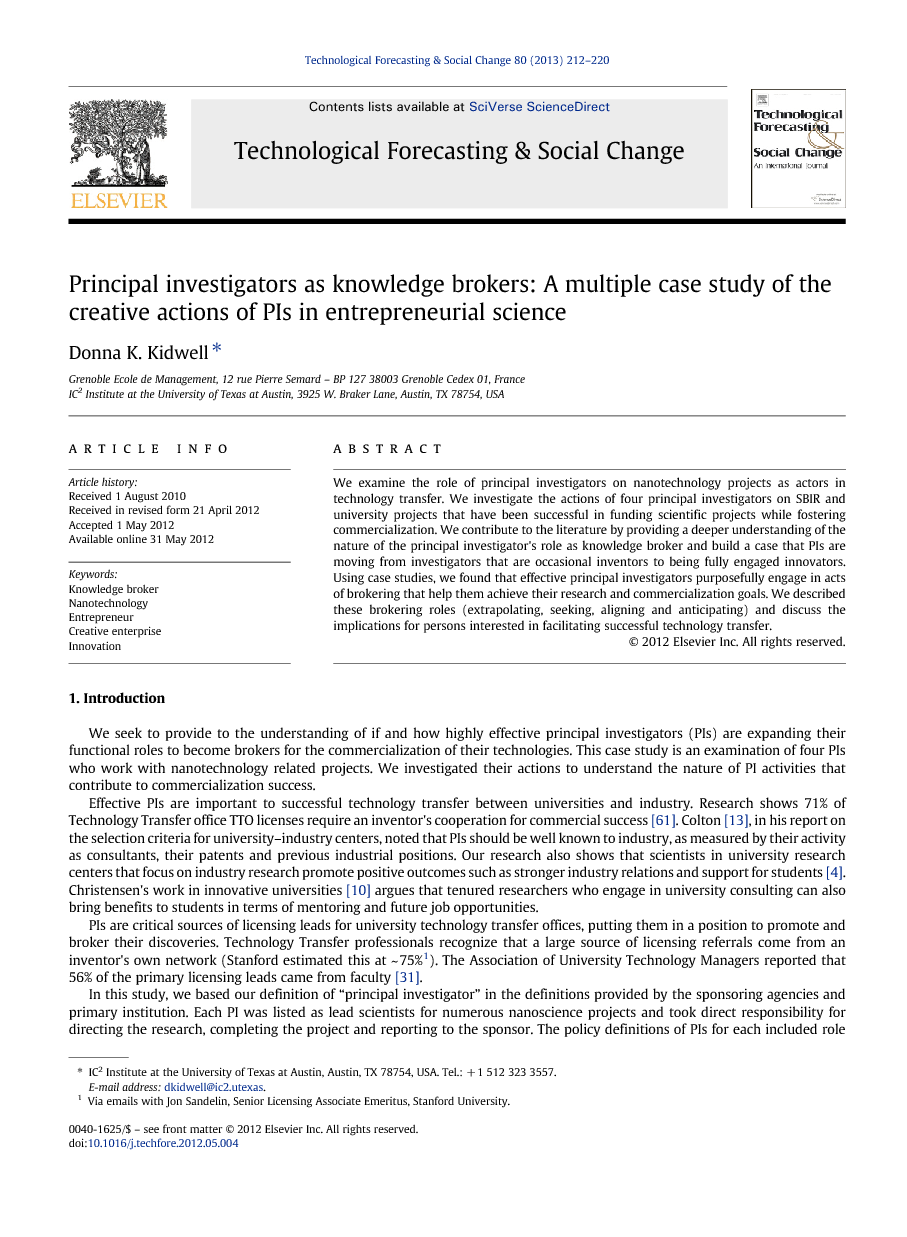 We seek to provide to the understanding of if and how highly effective principal investigators (PIs) are expanding their functional roles to become brokers for the commercialization of their technologies. This case study is an examination of four PIs who work with nanotechnology related projects. We investigated their actions to understand the nature of PI activities that contribute to commercialization success. Effective PIs are important to successful technology transfer between universities and industry. Research shows 71% of Technology Transfer office TTO licenses require an inventor's cooperation for commercial success [61]. Colton [13], in his report on the selection criteria for university–industry centers, noted that PIs should be well known to industry, as measured by their activity as consultants, their patents and previous industrial positions. Our research also shows that scientists in university research centers that focus on industry research promote positive outcomes such as stronger industry relations and support for students [4]. Christensen's work in innovative universities [10] argues that tenured researchers who engage in university consulting can also bring benefits to students in terms of mentoring and future job opportunities. PIs are critical sources of licensing leads for university technology transfer offices, putting them in a position to promote and broker their discoveries. Technology Transfer professionals recognize that a large source of licensing referrals come from an inventor's own network (Stanford estimated this at ~ 75%1). The Association of University Technology Managers reported that 56% of the primary licensing leads came from faculty [31]. In this study, we based our definition of “principal investigator” in the definitions provided by the sponsoring agencies and primary institution. Each PI was listed as lead scientists for numerous nanoscience projects and took direct responsibility for directing the research, completing the project and reporting to the sponsor. The policy definitions of PIs for each included role activities such as project leadership, management, financial and ethical accountability, but these definitions did not include any of the brokering activities identified during the study. This study argues that PIs are moving beyond the role of traditional principal investigators at the forefront of invention. While PIs are recognized as inventors [49], [53] and [66] they also innovators. A key challenge to successful innovation, wherever it might be, is the process by which ideas are shaped [9]. Christensen laid out a framework for innovations that could serve PIs well: PIs as innovators must watch the pace of the market, manage their resources to fund their work, and match the technology to the market [11]. Nanotechnology projects provide a unique opportunity to explore the creative activities of PIs. Nanotechnologies are looked to as harbingers of economic activity and new business creation [42], [43], [45], [51] and [55] and nano-oriented researchers are more interested in applications of their work in industry [32]. Nanotechnology commercialization requires creativity and ingenuity in business models and processes [33] and [48]. Three of the cases involved biotech applications of emerging nanoscience research. Biotech offers a creative opportunity to transform knowledge from the public university into small firms [19]. Indeed, the act of taking an invention through to an actual innovation is a highly creative act [18]. PIs engaged in innovative activities create new relationships with industry, new opportunities for students, and new trajectories for research. We selected PIs from the Small Business Research Grant (SBIR) programs and large public and private universities, enabling us to investigate a broad scope of PI activities geared towards commercialization. Our four PIs had considerable experience in both SBIR and university research projects. Two were PIs within small firms using SBIR funds who left the university environment to pursue R&D agendas within these firms. The other two were within Carnegie classified tier one research universities, and acted as consultants on SBIR projects alongside their own large projects. PIs within the SBIR program are a particularly interesting case. PIs on SBIR grants are not engaged in full time academic positions, rather they carry the role of PI and are expected to use the SBIR grant to perform research and development on innovative technological solutions. The grants are administered by large U.S. agencies as a vehicle to promote innovation in small firms [40]. As a PI on an SBIR grant, the researcher takes on a direct role in fostering new firm creation based on technology innovation. They participate in ‘dynamic capitalism’ as discussed by Kirchhoff [34], [35] and [36]. When successful, they create new jobs [2], [3] and [37] and foster new emerging technology ventures. The first PI, PI1, was an entrepreneur who uses the role of a PI in an SBIR commercialization effort, which is based on solid-state nonmaterial for research that he initiated in academic research setting. The second, PI2, held a dual role as a tenured professor while managing scientific entrepreneurial activities that he later spun out of the university. PI2 is the CEO of a small firm dedicated to molecular therapeutics where he fostered a very collegial environment with an aggressive research agenda within the contexts of the firm. The third, PI3, was a dedicated academic and devoted most of his time to building a research agenda on nanomaterials sciences within a prestigious private university. The fourth, PI4, was also a dedicated academic and worked within a public land grant Carnegie tier one research university as their director of an institute for molecular medicine. We used the case study [64] method and focused the four cases to build iterative theory [17]. These iterations took place over the course of two years of interviewing, observation and analysis of supporting documentation. The paper begins with an overview of the literature, followed by a detailing of our methodology. The findings of the study are described. Finally, The last section concludes the paper with a discussion of the results and their implications.

This study contributes to our understanding of PI roles by offering evidence from these case studies that PIs are moving beyond their functional roles to practice boundary spanning activities as they performed their research. These PIs are not only investigators and inventors, but they are innovators. They are creating value by bridging structural holes and building trust through specific brokering activities. They emerged as knowledge brokers, identifying structural holes and creating trust between the lab and industry through activities we categorized as: extrapolation, seeking, aligning and anticipating. The results of this study have interesting implications for technology transfer professionals. The PIs indicated that these skills were learned largely on the job. Training on these skills would make good workshop topics for managers of technology transfer looking to support brokering skills among faculty. Hargadon and Sutton [26] depicted such organizational support in research on IDEO and found that brokering skills increased the innovativeness of the firm. Finally, recent work has indicated that technology transfer offices themselves are taking on boundary spanning roles [14]. This may indicate specific areas where the office could build processes to enhance the effectiveness of brokering on the part of both the PI and the TTO.