عنوان انگلیسی
To adopt or not to adopt innovation: A case study of team-based learning
دانلود فوری مقاله + سفارش ترجمه 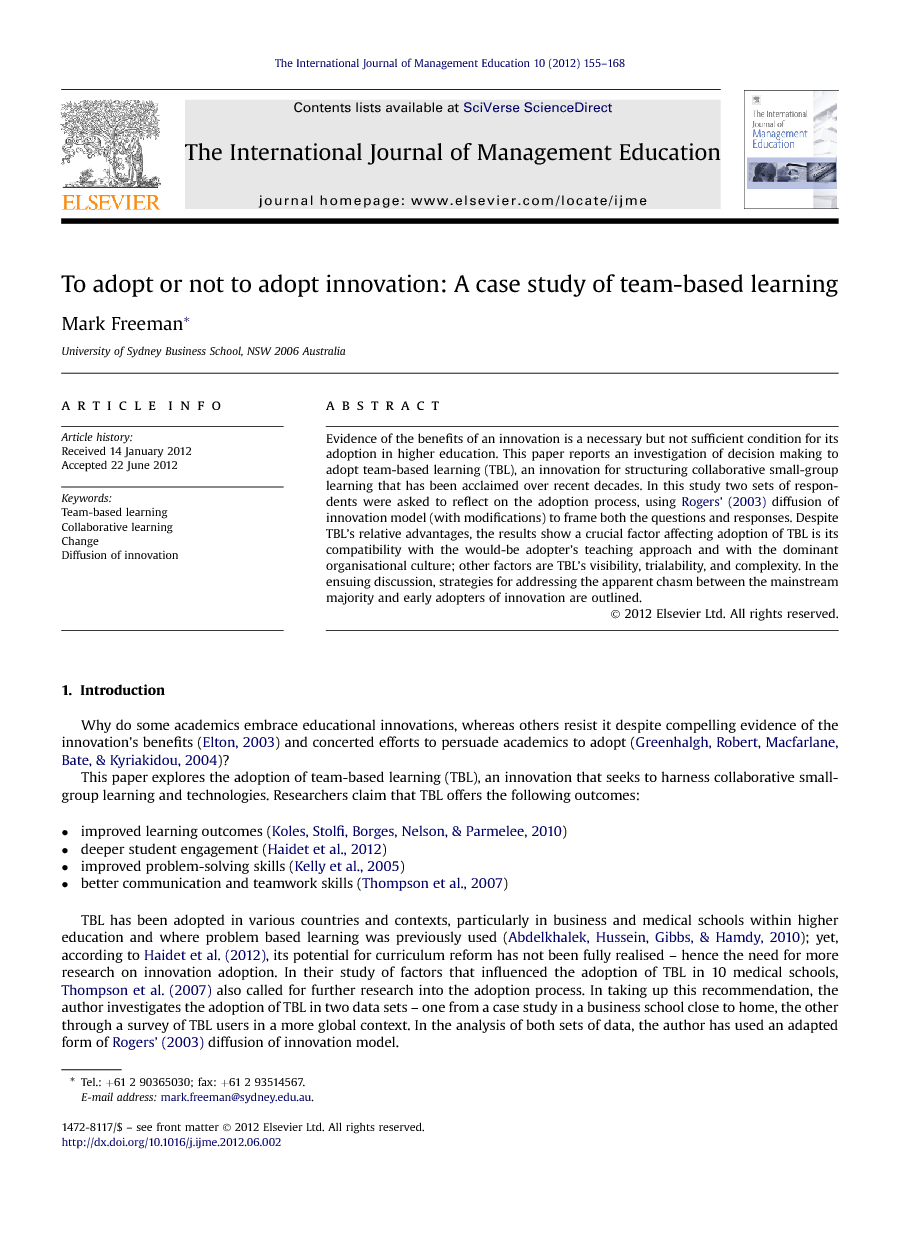 Evidence of the benefits of an innovation is a necessary but not sufficient condition for its adoption in higher education. This paper reports an investigation of decision making to adopt team-based learning (TBL), an innovation for structuring collaborative small-group learning that has been acclaimed over recent decades. In this study two sets of respondents were asked to reflect on the adoption process, using Rogers' (2003) diffusion of innovation model (with modifications) to frame both the questions and responses. Despite TBL's relative advantages, the results show a crucial factor affecting adoption of TBL is its compatibility with the would-be adopter's teaching approach and with the dominant organisational culture; other factors are TBL's visibility, trialability, and complexity. In the ensuing discussion, strategies for addressing the apparent chasm between the mainstream majority and early adopters of innovation are outlined.

Why do some academics embrace educational innovations, whereas others resist it despite compelling evidence of the innovation's benefits (Elton, 2003) and concerted efforts to persuade academics to adopt (Greenhalgh, Robert, Macfarlane, Bate, & Kyriakidou, 2004)? This paper explores the adoption of team-based learning (TBL), an innovation that seeks to harness collaborative small-group learning and technologies. Researchers claim that TBL offers the following outcomes: • improved learning outcomes (Koles, Stolfi, Borges, Nelson, & Parmelee, 2010) • deeper student engagement (Haidet et al., 2012) • improved problem-solving skills (Kelly et al., 2005) • better communication and teamwork skills (Thompson et al., 2007) TBL has been adopted in various countries and contexts, particularly in business and medical schools within higher education and where problem based learning was previously used (Abdelkhalek, Hussein, Gibbs, & Hamdy, 2010); yet, according to Haidet et al. (2012), its potential for curriculum reform has not been fully realised – hence the need for more research on innovation adoption. In their study of factors that influenced the adoption of TBL in 10 medical schools, Thompson et al. (2007) also called for further research into the adoption process. In taking up this recommendation, the author investigates the adoption of TBL in two data sets – one from a case study in a business school close to home, the other through a survey of TBL users in a more global context. In the analysis of both sets of data, the author has used an adapted form of Rogers' (2003) diffusion of innovation model. For the benefit of readers who are unfamiliar with TBL, the main body of the paper begins with a thumbnail sketch of TBL – how it is supposed to work and why it is highly regarded. This is followed by a literature review, which concentrates on research about the adoption of innovation, including the work in which the afore-mentioned Rogers (2003) model has been used. The next section describes the research methods, and hard upon this is the results section – structured according to the seven factors identified by Rogers and others. The discussion that follows goes beyond summarising the findings to outline strategies for breaking down the resistance to adoption of TBL.

In this paper the author has investigated, in two settings, whether to adopt team-based learning. TBL is generally regarded as a student-centred innovation, which comprises the grouping of students into teams who work collaboratively to solve practical problems and receive quick feedback on learning gaps, aided by various technologies. Despite strong evidence of TBL's educational benefits in the three decades since its inception, there has not been widespread adoption of it in business higher education. In a survey format and in case study interviews, a sample of academics, leaders and support staff were asked to reflect on the adoption process through the framework provided by the extended Rogers' diffusion model – namely, relative advantage, cultural compatibility, complexity, trialability, visibility, internal and external organisational factors. Research results indicate that despite relative advantages of TBL over practices it replaced for students in particular, there is a serious upfront time commitment for academics. A crucial factor affecting adoption is the pedagogical compatibility of the adopter and, to a lesser extent, its compatibility with the dominant organisational culture. Furthermore, if wider adoption is to occur, the apparent complexity of TBL, low trialability and poor visibility of its benefits need to be addressed. Internal and external factors did not appear significant deterrents here, likely due to greater preponderance of early adopters over mainstream academics in the sample. The main limitation of this research is the bias towards adopters and student-centred proponents in those who responded to the survey and participated in the case study. Sampling potential adopters from the mainstream majority would be valuable but poses significant impracticalities. To address the apparent chasm between early adopters of TBL and the mainstream majority therefore, the author has drawn on Treleaven et al. (2011) and proposed action in three organisational domains. First, to build capacity for student-centred teaching, university and school leaders need to show commitment by motivating other leaders distributed throughout their various communities of practice (e.g. directors of support centres and heads of academic departments) as well moral support through encouragement, showcasing and celebration of accomplishment. Second, to provide incentives for risk taking in student-centred activities such as TBL, leaders' rhetoric needs to be matched in policy. For example, since adoption takes several iterations to become refined and to achieve desired outcomes, a policy that grants TBL adopters the tenure of multiple terms of teaching and delays in achieving minimum student satisfaction level, increases their likelihood of investing the necessary time for TBL to be implemented with a high chance of success. Third, leaders need to provide resources and tools to support TBL adopters including technologies such as IFAT cards and support staff to resolve challenges. Pursuing these actions increases the chances of realising the potential outcomes of TBL. A second and related limitation is that adopters' experiences might be more strongly influenced by the incremental adoption of the various TBL design elements. Haidet et al. (2012, p. 298) argue that ‘adaptations of novel methods, such as TBL, may differ across implementations, making it difficult to draw general conclusions about the effect and outcomes of a particular teaching method’. They recommend researchers capture explicitly and report the various TBL elements they adopt and the sequence of their adoption to enable a more thorough analysis that might uncover more successful TBL variants.