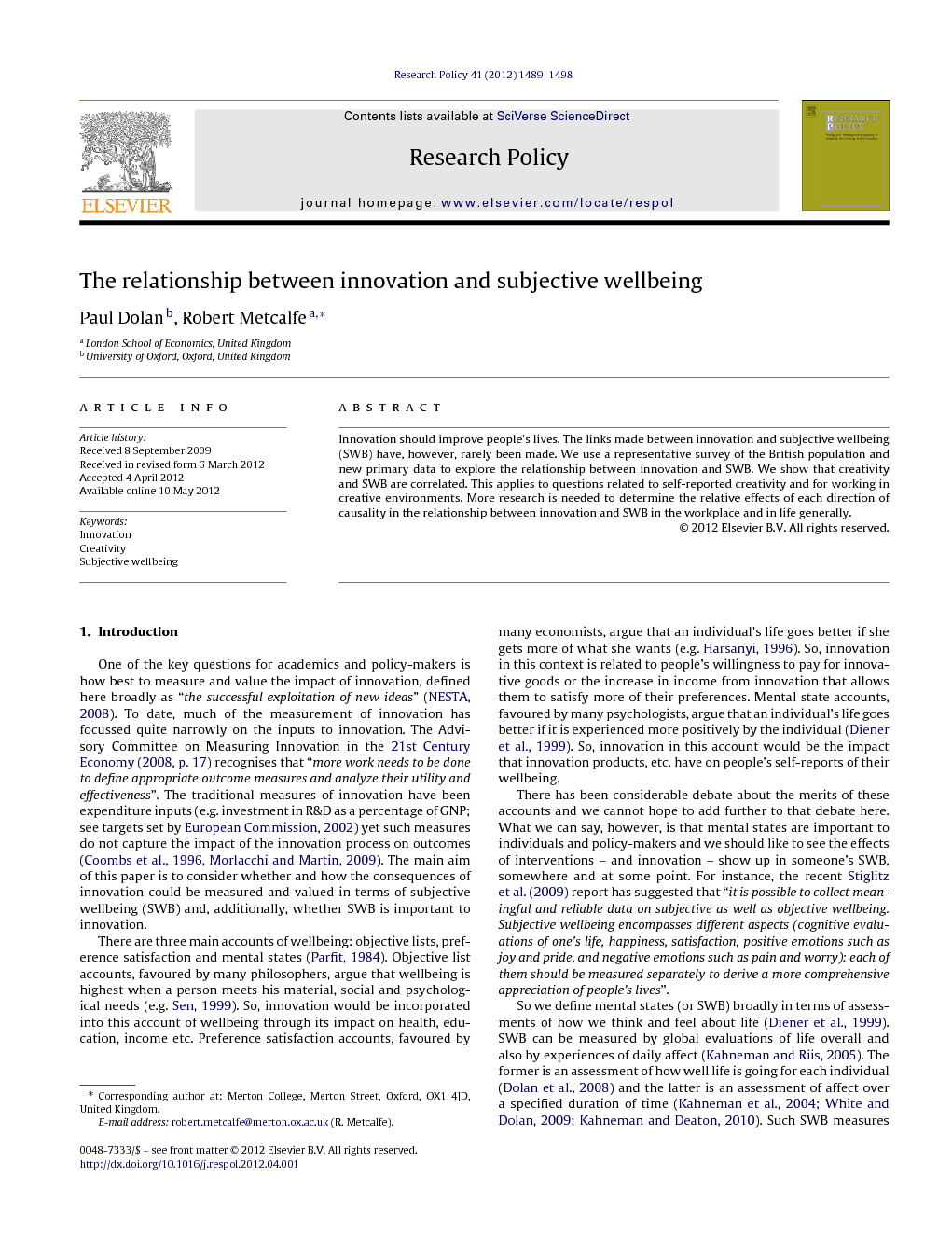 One of the key questions for academics and policy-makers is how best to measure and value the impact of innovation, defined here broadly as “the successful exploitation of new ideas” (NESTA, 2008). To date, much of the measurement of innovation has focussed quite narrowly on the inputs to innovation. The Advisory Committee on Measuring Innovation in the 21st Century Economy (2008, p. 17) recognises that “more work needs to be done to define appropriate outcome measures and analyze their utility and effectiveness”. The traditional measures of innovation have been expenditure inputs (e.g. investment in R&D as a percentage of GNP; see targets set by European Commission, 2002) yet such measures do not capture the impact of the innovation process on outcomes (Coombs et al., 1996, Morlacchi and Martin, 2009). The main aim of this paper is to consider whether and how the consequences of innovation could be measured and valued in terms of subjective wellbeing (SWB) and, additionally, whether SWB is important to innovation. There are three main accounts of wellbeing: objective lists, preference satisfaction and mental states (Parfit, 1984). Objective list accounts, favoured by many philosophers, argue that wellbeing is highest when a person meets his material, social and psychological needs (e.g. Sen, 1999). So, innovation would be incorporated into this account of wellbeing through its impact on health, education, income etc. Preference satisfaction accounts, favoured by many economists, argue that an individual's life goes better if she gets more of what she wants (e.g. Harsanyi, 1996). So, innovation in this context is related to people's willingness to pay for innovative goods or the increase in income from innovation that allows them to satisfy more of their preferences. Mental state accounts, favoured by many psychologists, argue that an individual's life goes better if it is experienced more positively by the individual (Diener et al., 1999). So, innovation in this account would be the impact that innovation products, etc. have on people's self-reports of their wellbeing. There has been considerable debate about the merits of these accounts and we cannot hope to add further to that debate here. What we can say, however, is that mental states are important to individuals and policy-makers and we should like to see the effects of interventions – and innovation – show up in someone's SWB, somewhere and at some point. For instance, the recent Stiglitz et al. (2009) report has suggested that “it is possible to collect meaningful and reliable data on subjective as well as objective wellbeing. Subjective wellbeing encompasses different aspects (cognitive evaluations of one's life, happiness, satisfaction, positive emotions such as joy and pride, and negative emotions such as pain and worry): each of them should be measured separately to derive a more comprehensive appreciation of people's lives”. So we define mental states (or SWB) broadly in terms of assessments of how we think and feel about life (Diener et al., 1999). SWB can be measured by global evaluations of life overall and also by experiences of daily affect (Kahneman and Riis, 2005). The former is an assessment of how well life is going for each individual (Dolan et al., 2008) and the latter is an assessment of affect over a specified duration of time (Kahneman et al., 2004, White and Dolan, 2009 and Kahneman and Deaton, 2010). Such SWB measures have been validated against neurological evidence (Davidson, 2004), physiological evidence (Steptoe et al., 2005), and a range of behaviours (Lyubomirsky et al., 2005), including suicide (Daly and Wilson, 2009). Therefore, and without denigrating the other accounts of wellbeing, this paper focuses on wellbeing as mental states. The focus of this paper is on three main relationships that have yet to be analysed in a representative survey of individuals: (i) is there a relationship between innovation and SWB in the general population?; (ii) does any innovation–SWB relationship rely on the measures of innovation and SWB that are used?; and (iii) to what extent are more creative workplaces conducive to higher SWB? We attempt to answer these questions using data obtained within the U.K. these questions are novel from the perspective of the SWB literature, and the innovation literature, and attempts to marry the two literatures together. In Section 2, we discuss what is already known about the impact that SWB has on innovation and the impact that innovation has on SWB. As might be expected, remarkably little is known about causality in the relationship between innovation and different measures of SWB, especially in a representative population. In Section 3, we discuss our data and methodology that we use to address these gaps in the literature. In Section 4, we discuss our analyses of a secondary dataset (the British Household Panel Survey) and our own primary data that demonstrates how differing measures of SWB are correlated with self-reported innovation and creativity. We certainly need new studies to better understand the causal relationships between innovation and SWB, but this present study demonstrates a strong link between innovation and SWB. We do not know whether there is a causal connection and are not claiming such a thing in this paper. So we need to make better and innovative use of a range of methods, including natural and field experiments to understand the direction of the relationship between SWB and innovation. In Section 5, we provide some examples of where experiments might prove helpful, and we provide some concluding remarks in Section 6.

In this paper we have found an important link between innovation and subjective wellbeing, from both a representative sample and our own student sample. There is actually very little evidence pertaining to the relationship between innovation and SWB in the current literature, and no evidence at all of the causal relationships between them. Longitudinal data can help in addressing these issues as has been shown in this paper on job satisfaction. Nonetheless, this paper demonstrates a very large gap in the literature on the causal impact of innovation and people's subjective welfare. There is little causal evidence on the impact of SWB on innovation. The analysis from this paper demonstrates some potentially interesting findings. Firstly, life evaluations are associated with higher originality and imagination in the general population. These associations are actually quite large in comparison to other variables that impact on both originality and imagination. For instance, for originality, a 20% increase in life satisfaction is equivalent to the impact of having a degree. Secondly, some measures of experience are associated with originality. For instance, a 30% increase in happiness yesterday is equivalent to having a degree. Thirdly, working in the R&D sector is associated with higher evaluations of the job. Our research has only considered associations, and our primary data should only be seen as a first, tentative attempt to explore the innovation–SWB relationship further. Future research should attempt to find out the direction of causality in these various interesting relationships. Further consideration and measurement of SWB – particularly using natural and field experiments – will enable us to consider whether and how innovation policies should be targeted at individuals, businesses, sectors and locations to have the largest impact on SWB. This will further push the boundaries of innovation research and policy, and will lead to innovation that enhances wellbeing. In fact, these relationships have potentially important implications for productivity and economic growth. For instance, a 33% increase in life satisfaction is associated with 8% higher imagination. If this relationship from SWB to creativity is causal, then changing people's SWB could be a very effective way of increasing productivity and economic growth. In the aggregation of individuals, SWB could be a vital missing piece in the debates and research in innovation and economic growth. This research has highlighted that the associations between SWB and innovation are large, and it warrants much more attention across the social sciences.