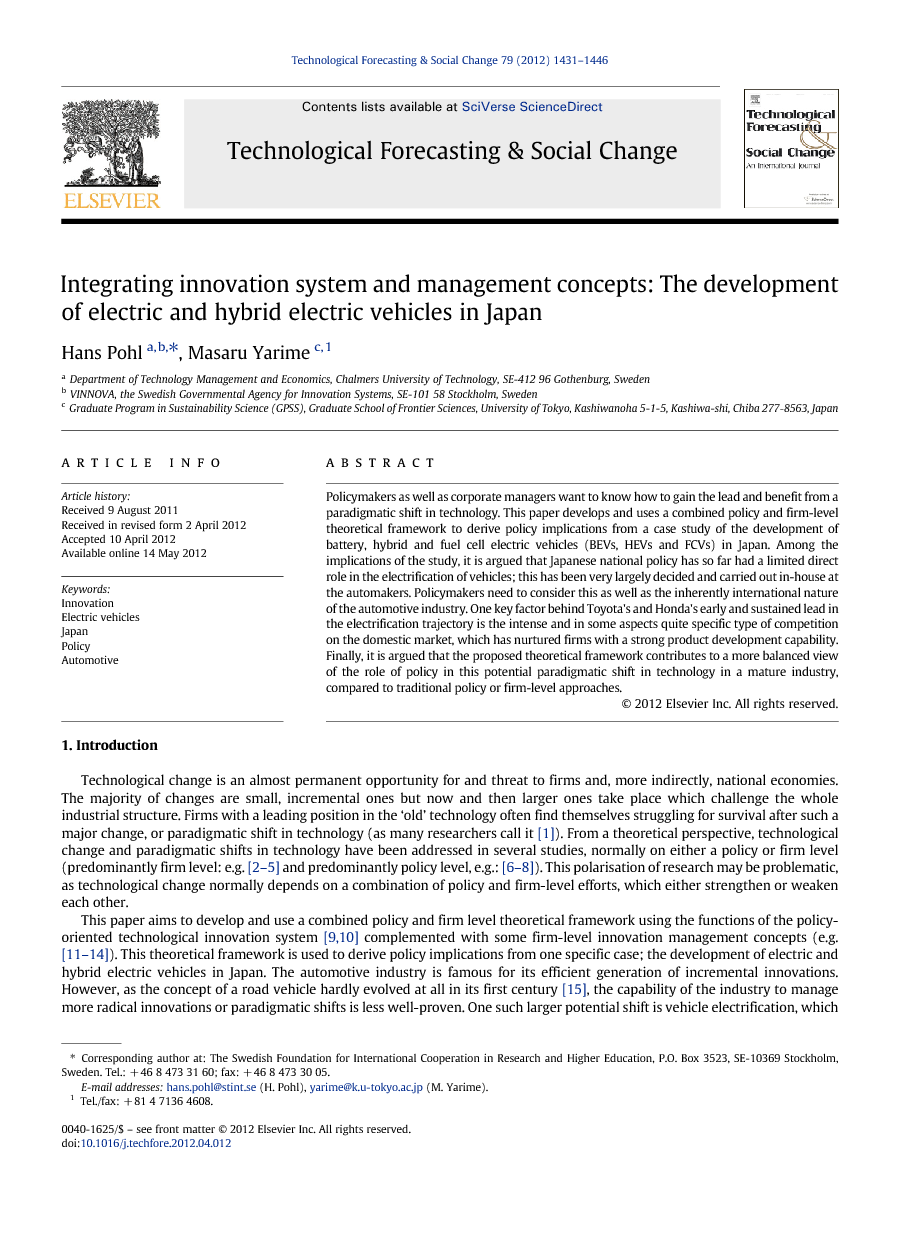 Policymakers as well as corporate managers want to know how to gain the lead and benefit from a paradigmatic shift in technology. This paper develops and uses a combined policy and firm-level theoretical framework to derive policy implications from a case study of the development of battery, hybrid and fuel cell electric vehicles (BEVs, HEVs and FCVs) in Japan. Among the implications of the study, it is argued that Japanese national policy has so far had a limited direct role in the electrification of vehicles; this has been very largely decided and carried out in-house at the automakers. Policymakers need to consider this as well as the inherently international nature of the automotive industry. One key factor behind Toyota's and Honda's early and sustained lead in the electrification trajectory is the intense and in some aspects quite specific type of competition on the domestic market, which has nurtured firms with a strong product development capability. Finally, it is argued that the proposed theoretical framework contributes to a more balanced view of the role of policy in this potential paradigmatic shift in technology in a mature industry, compared to traditional policy or firm-level approaches.

Technological change is an almost permanent opportunity for and threat to firms and, more indirectly, national economies. The majority of changes are small, incremental ones but now and then larger ones take place which challenge the whole industrial structure. Firms with a leading position in the ‘old’ technology often find themselves struggling for survival after such a major change, or paradigmatic shift in technology (as many researchers call it [1]). From a theoretical perspective, technological change and paradigmatic shifts in technology have been addressed in several studies, normally on either a policy or firm level (predominantly firm level: e.g. [2], [3], [4] and [5] and predominantly policy level, e.g.: [6], [7] and [8]). This polarisation of research may be problematic, as technological change normally depends on a combination of policy and firm-level efforts, which either strengthen or weaken each other. This paper aims to develop and use a combined policy and firm level theoretical framework using the functions of the policy-oriented technological innovation system [9] and [10] complemented with some firm-level innovation management concepts (e.g. [11], [12], [13] and [14]). This theoretical framework is used to derive policy implications from one specific case; the development of electric and hybrid electric vehicles in Japan. The automotive industry is famous for its efficient generation of incremental innovations. However, as the concept of a road vehicle hardly evolved at all in its first century [15], the capability of the industry to manage more radical innovations or paradigmatic shifts is less well-proven. One such larger potential shift is vehicle electrification, which has been an issue ever since the internal combustion engine gained a dominant position at the beginning of the 20th century [16]. In mature industries, such as the automotive one, most development is decided and carried out within the firms. Not least for this reason, the introduction of firm-level aspects to a policy framework might be valuable for a better understanding of the development. Several data sources are used including interviews and literature and all main electrification candidates are covered in this study. Hybrid electric vehicles (HEVs) use both electric motor(s) and an internal combustion engine for propulsion, whereas ‘pure’ electric vehicles have no engine. An HEV's external energy supply is fuel for the engine and, in the case of plug-in HEVs, electricity from the grid as well. Battery electric vehicles (BEVs) use electricity from the grid only and fuel cell electric vehicles (FCVs) are normally fuelled by hydrogen. In this paper, (H)EV is used to denote all types of electric propulsion, from micro-hybrids, via full hybrids to all-electric vehicles. The main reason for this inclusive approach is that the interrelations and synergies between the different alternatives are strong. A separate study of one electrification alternative, such as HEVs, would lead to severe delimitation problems. Until the end of 2008, 95% of HEVs were sold by Japanese automakers, see Fig. 1. From an empirical perspective, the activities of actors such as Toyota, Honda and Nissan are of interest, chiefly because they have initiated and maintained a highly dominant position in vehicle electrification.Compared to previous literature, this study uses a new combination of policy and firm perspectives. Further, the empirical data obtained through the study adds to the literature on Japanese automakers. Policy implications of the study include the inherently international nature of the automotive industry. This implies reduced prospects for directly influencing technological development, even in large countries with a leading industry such as Japan. It calls for more generic initiatives, such as maintaining intensive competition on the domestic market, in line with Porter [23] and others. This study further argues that the very strong firm–internal product development capability was one of the crucial factors enabling a successful development and introduction the technologically relatively complex HEVs. In comparison, most other automakers apply a more firm–external development using knowledgeable suppliers to a higher extent (cf. [24]). The remainder of the paper is organised as follows: the review of previous literature on innovation systems, management of (radical) innovations is followed by the method section and thereafter a section reviewing literature on the development of the Japanese automotive industry. The empirical data is then presented, followed by discussion, recommendations and conclusions.

This paper aimed to develop and use a theoretical framework integrating the functions of the technological innovation system with some firm-level innovation management concepts. This theoretical framework was used to derive policy implications from a case study of the development of electric and hybrid electric vehicles in Japan. The paper illustrates the long and meandering process which potentially leads to a paradigmatic shift. A range of firm–internal and firm–external factors contributing to the early entry and dominance of Japanese automakers in the HEV market has been highlighted and it has been argued that Japanese policy until 2009 has had little direct influence on the development. Among the policy implications of the study, it has been argued for national policy to reflect the inherent international nature of the automotive industry, which in turn implies reduced possibilities to directly influence the technological development and calls for more generic initiatives, such as maintaining intensive competition on the domestic market. In line with previous literature, this study argues that the very strong product development capability at Toyota, Honda and Nissan was one of the crucial factors enabling development and introduction of HEVs followed by a sustained market lead. Finally, it has been argued that the proposed theoretical framework contributes to a more balanced view of the role of policy in this potential paradigmatic shift in technology in a mature industry, compared to traditional policy or firm-level approaches.