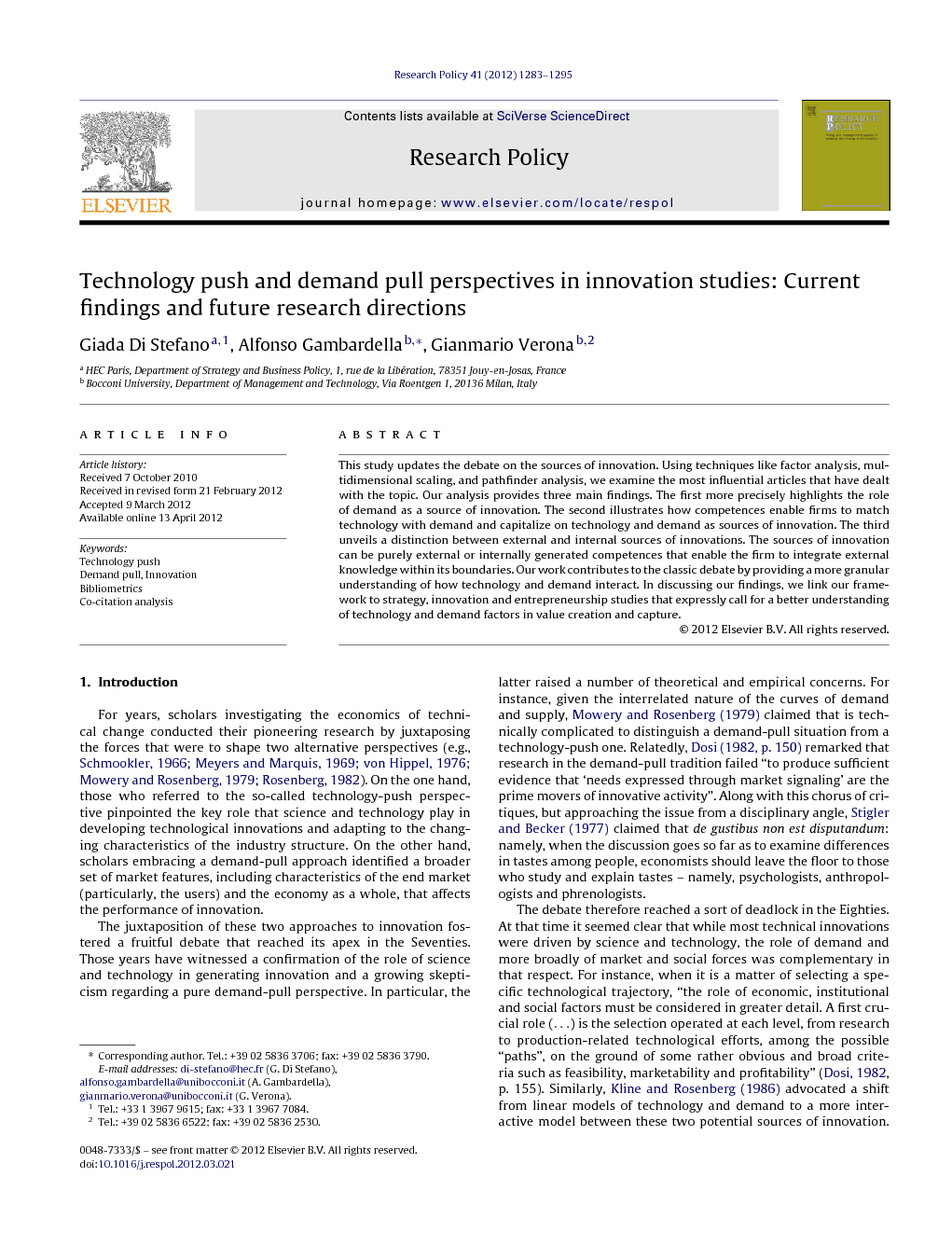 For years, scholars investigating the economics of technical change conducted their pioneering research by juxtaposing the forces that were to shape two alternative perspectives (e.g., Schmookler, 1966, Meyers and Marquis, 1969, von Hippel, 1976, Mowery and Rosenberg, 1979 and Rosenberg, 1982). On the one hand, those who referred to the so-called technology-push perspective pinpointed the key role that science and technology play in developing technological innovations and adapting to the changing characteristics of the industry structure. On the other hand, scholars embracing a demand-pull approach identified a broader set of market features, including characteristics of the end market (particularly, the users) and the economy as a whole, that affects the performance of innovation. The juxtaposition of these two approaches to innovation fostered a fruitful debate that reached its apex in the Seventies. Those years have witnessed a confirmation of the role of science and technology in generating innovation and a growing skepticism regarding a pure demand-pull perspective. In particular, the latter raised a number of theoretical and empirical concerns. For instance, given the interrelated nature of the curves of demand and supply, Mowery and Rosenberg (1979) claimed that is technically complicated to distinguish a demand-pull situation from a technology-push one. Relatedly, Dosi (1982, p. 150) remarked that research in the demand-pull tradition failed “to produce sufficient evidence that ‘needs expressed through market signaling’ are the prime movers of innovative activity”. Along with this chorus of critiques, but approaching the issue from a disciplinary angle, Stigler and Becker (1977) claimed that de gustibus non est disputandum: namely, when the discussion goes so far as to examine differences in tastes among people, economists should leave the floor to those who study and explain tastes – namely, psychologists, anthropologists and phrenologists. The debate therefore reached a sort of deadlock in the Eighties. At that time it seemed clear that while most technical innovations were driven by science and technology, the role of demand and more broadly of market and social forces was complementary in that respect. For instance, when it is a matter of selecting a specific technological trajectory, “the role of economic, institutional and social factors must be considered in greater detail. A first crucial role (…) is the selection operated at each level, from research to production-related technological efforts, among the possible “paths”, on the ground of some rather obvious and broad criteria such as feasibility, marketability and profitability” (Dosi, 1982, p. 155). Similarly, Kline and Rosenberg (1986) advocated a shift from linear models of technology and demand to a more interactive model between these two potential sources of innovation. Overall, science and technology seemed to be “the” source for the vast majority of technological innovations and demand was the best companion to drive innovation in the right economic and institutional directions. Despite the growing consensus about this mutual dependence with an emphasis on technology as the ultimate source of innovation, the way the selection process and, more broadly, the interaction might have occurred was primarily described conceptually and was discussed mostly at a macro level. Instead, due to the increasing importance of technology within organizations ( Arora and Gambardella, 1994, Chesbrough, 2003 and von Hippel, 2005) and the impressive growth of fields focusing on the economics and management of technology ( Fagerberg et al., 2012 and Martin et al., 2012), in this paper we aim to review the influential articles published on the sources of innovation in recent years. The question that motivated our research is to see whether these more recent studies have enriched our understanding of technology and demand as sources of innovation and have explained more specifically how the two can be leveraged in order to commercialize successful innovations. Our review follows mainstream methodologies of bibliometric analysis (e.g., Acedo et al., 2006, Nerur et al., 2008 and Di Stefano et al., 2010). In addition to better clarifying the role of demand as a source of innovation, our findings show that a clearer balance between the two approaches has apparently now been reached from both an empirical and a more micro standpoint. Indeed, in addition to confirming the dual nature of innovation sources (technology push and demand pull), our findings highlight that scholars have paid particular attention to studying and demonstrating how firm competences enable firms to match the two sources and thus deliver the right innovations to the market. In this respect, researchers seem to have focused their attention on different approaches to knowledge integration: those who start with a clear focus on the external environment and try to absorb knowledge within firm boundaries and those who start from internal sources and focus on integrating external knowledge. While in the former case, external sources remain the ultimate source of innovation, in the latter case internally generated competences seem to be the sources of innovation. The rest of the paper is organized as follows. We explain in detail our methodological approach (Section 2); we then present our findings with respect to the three analyses we ran (Sections 3, 4 and 5); finally, we conclude with a discussion section in which we call for: studies on the microfoundations of innovation, research linking innovation and entrepreneurship, and the pluralism of methodologies for the understanding the topic under investigation.