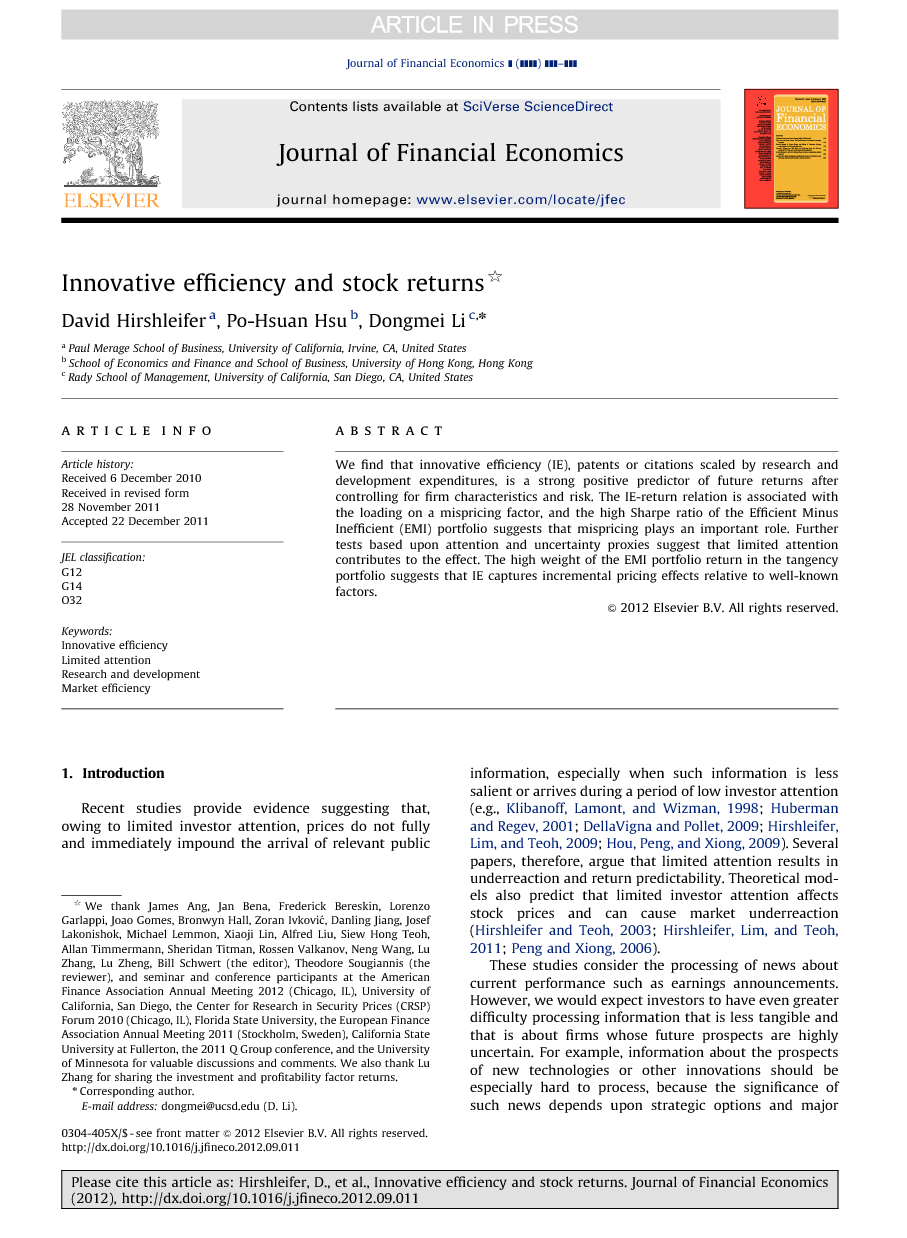 We find that innovative efficiency (IE), patents or citations scaled by research and development expenditures, is a strong positive predictor of future returns after controlling for firm characteristics and risk. The IE-return relation is associated with the loading on a mispricing factor, and the high Sharpe ratio of the Efficient Minus Inefficient (EMI) portfolio suggests that mispricing plays an important role. Further tests based upon attention and uncertainty proxies suggest that limited attention contributes to the effect. The high weight of the EMI portfolio return in the tangency portfolio suggests that IE captures incremental pricing effects relative to well-known factors.

We find that firms that are more efficient in innovation on average have higher contemporaneous market valuations and superior future operating performance, market valuation, and stock returns. The relation between innovative efficiency (IE) and operating performance is robust to controlling for innovation-related variables suggested by other studies, such as R&D-to-market equity, significant R&D growth, patent-to-market equity, and change in adjusted patent citations scaled by average total assets. Similarly, the relation between IE and current (and future) market valuation is also robust to a variety of controls. The positive association of IE with subsequent stock returns is robust to controlling for standard return predictions and innovation-related variables. Empirical factor pricing models, such as the Carhart four-factor model and the investment-based three-factor model, do not fully explain the IE-return relation. Adding the financing-based mispricing factor UMO to these models improves the models’ explanatory power, but substantial and significant abnormal return performance remains. These findings show that the IE effect on returns is incremental to existing return predictors and cannot be explained by known factors (risk or mispricing). Further analyses show that proxies for investor inattention and valuation uncertainty are associated with stronger ability of IE measures to predict returns. These findings provide further support for psychological bias or constraints contributing to the IE-return relation. The high Sharpe ratios of the two Efficient Minus Inefficient (EMI) factors also suggest this relation is not entirely explained by rational pricing. Finally, regardless of the source of the effect, the heavy weight of the EMI factors in the tangency portfolio suggests that innovative efficiency captures pricing effects above and beyond those captured by the other well-known factors and other innovation effects, which focus on either innovative input or output separately. The fact that the mispricing factor partly helps explain the innovative efficiency effect suggests that there is commonality in mispricing across firms associated with innovative efficiency. Such commonality could arise, for example, if investors do not fully impound news about the correlated shifts in innovative efficiency that are driven by technological shifts. This is consistent with behavioral models in which there is commonality in mispricing (Daniel et al., 2001 and Barberis and Shleifer, 2003). As a policy matter, if capital markets fail to reward firms that are more efficient at innovation, there will be potential misallocation of resources in which firms that are highly effective at innovation are undercapitalized relative to firms that are less effective at innovating. Our findings suggest that investors should direct greater attention to innovative efficiency and that innovative efficiency can be a useful input for firm valuation.