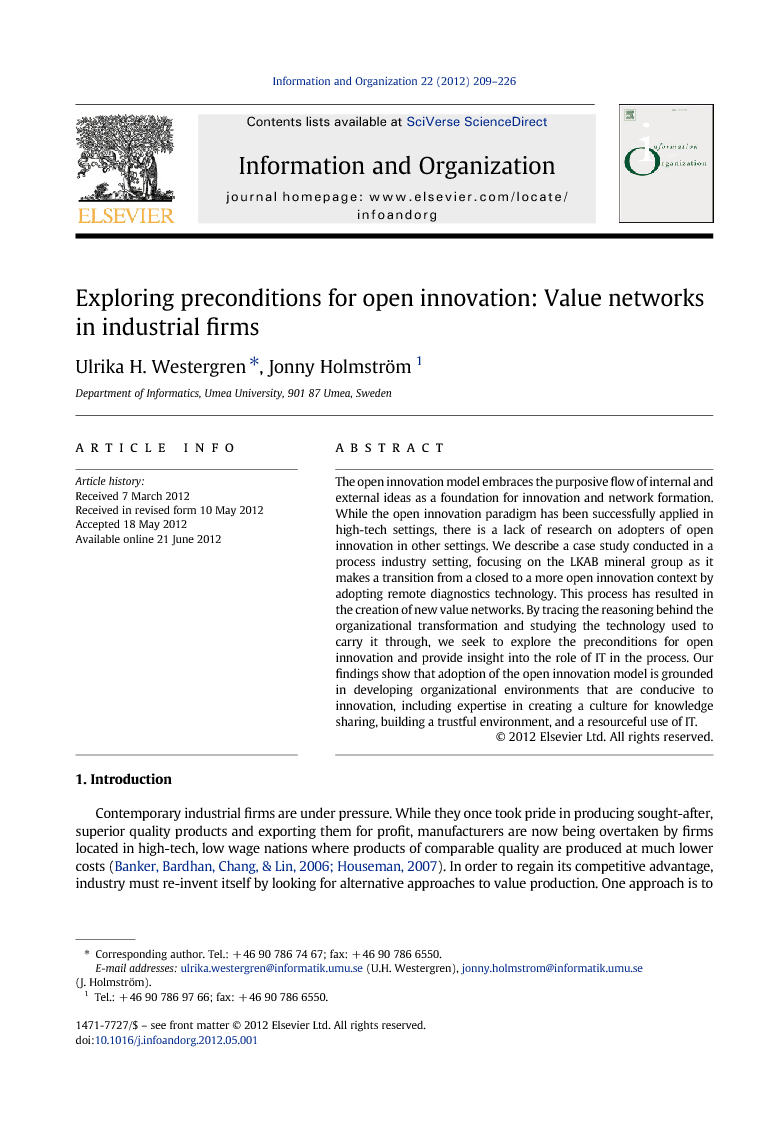 The open innovation model embraces the purposive flow of internal and external ideas as a foundation for innovation and network formation. While the open innovation paradigm has been successfully applied in high-tech settings, there is a lack of research on adopters of open innovation in other settings. We describe a case study conducted in a process industry setting, focusing on the LKAB mineral group as it makes a transition from a closed to a more open innovation context by adopting remote diagnostics technology. This process has resulted in the creation of new value networks. By tracing the reasoning behind the organizational transformation and studying the technology used to carry it through, we seek to explore the preconditions for open innovation and provide insight into the role of IT in the process. Our findings show that adoption of the open innovation model is grounded in developing organizational environments that are conducive to innovation, including expertise in creating a culture for knowledge sharing, building a trustful environment, and a resourceful use of IT.

Contemporary industrial firms are under pressure. While they once took pride in producing sought-after, superior quality products and exporting them for profit, manufacturers are now being overtaken by firms located in high-tech, low wage nations where products of comparable quality are produced at much lower costs (Banker et al., 2006 and Houseman, 2007). In order to regain its competitive advantage, industry must re-invent itself by looking for alternative approaches to value production. One approach is to improve the effectiveness and efficiency of production, partly by organizational re-structuring, but also by investing heavily in new information technology (IT) to develop industrial processes. By using IT to monitor the production line, the process can be speeded up and made more efficient, more streamlined, and more cost-effective. To this end the evolution in remote sensing technology holds particular promise as it enables firms to monitor complex processes from a distance. Remote sensing has to date received some, but not sufficient, attention within our field, for example through the work of Zuboff (1988), who studied the use of smart machines within the pulp- and paper industry, Puri (2007), with his work on the use of GIS in India, and Østerlie, Almklov, and Hepsø (2012) who studied undersea oil well maintenance. These researchers have all shown how the use of IT creates possibilities for knowledge generation. As industries now embrace the use of remote sensing, they come into close contact with the technological potential for boundary-spanning activities (Jonsson, Holmström, & Lyytinen, 2009), hence providing the firms with an opportunity for both internal and external process innovation and new ways of value creation. As such, the current industrial use of remote sensing opens up the field of research, from a focus on knowledge systems to value creation and innovation. The procurement and employment of new information systems are not the only things that industrial firms have done to remain competitive. They are simultaneously stimulating innovation by rethinking and reshaping their original forms and external boundaries, moving toward a networked environment in line with the current global trend of interorganizational collaboration (Chesbrough, 2003 and Chesbrough, 2006). Since the 1980s, there has been a persistent decline in conventional business practices such as mergers and acquisitions and reliance on venture capital as the number of new interorganizational collaborative schemes has increased (Xie & Johnston, 2004). Research has shown how organizations strive to create added business value through actively seeking cooperation and co-dependency in the pursuit of mutually beneficial behavior (Gallivan, 2001, Swan et al., 1999, Swan and Scarbrough, 2005 and Van de Ven, 2005). The increased globalization, widespread use of new technology, and pressure to be on-line, flexible, and efficient has resulted in the formation of strategic alliances, joint-ventures and partnerships, and a steadily increasing flow of interorganizational knowledge (Chesbrough, 2006, Inkpen and Tsang, 2005, Kling and Jewett, 1994, Newell and Swan, 2000 and Wigand et al., 1997). By engaging in an interorganizational network, firms gain access to new knowledge, resources, markets and technologies (Hislop et al., 2000 and Inkpen and Tsang, 2005). This movement toward an open, networked environment, is captured in the open innovation model proposed by Chesbrough, 2003 and Chesbrough, 2006. The model focuses on the possibilities and limitations associated with organizational transformations involving moving from a more closed environment where innovation is done in-house to a more open environment where innovation is done in collaboration and through the flow of internal and external ideas. However, firms involved in such enterprises risk the outflow of internal core competence, which could make them more vulnerable to competitors. The necessary openness is both a strength and a potential weakness, and the changing boundaries and the process of creating and maintaining partnership relationships over time thus have to be properly managed in order to maximize potential value and decrease potential risks (Vanhaverbeke, 2006). This paper discusses LKAB, Sweden's largest iron ore mining company, and their struggle to remain competitive by engaging in an interorganizational network and thus moving from a predominantly closed environment to a more open one. By tracing the reasoning behind the organizational transformation and studying the technology used to carry it through, we seek to explore the preconditions for open innovation and provide insight into the role of IT in this process, thereby developing this open innovation perspective theoretically as well as illustrating it empirically. This research expands the study of innovation by exploring the underlying dynamics and trust in open innovation networks. Our findings show that network ties provide value that is augmented or hampered by the role that trust plays in such networks. Thus, this study introduces trust as an underappreciated but potentially highly valuable source of value in open innovation networks. There have been recent calls from other researchers to increase the amount of IS research conducted at the industry level (Chiasson and Davidson, 2005 and Crowston and Myers, 2004). Although mining was one of the first industries examined by IS researchers (specifically, Enid Mumford in the 1960s), it has not been considered in many recent studies. Acknowledging that information technology has permeated all aspects of industrial organizations, these areas offer rich opportunities for the IS field to develop its knowledge and broaden its relevance (Chiasson & Davidson, 2005). Due to their systematic, strategic, and innovative use of IT, and their commitment to an open innovation network, LKAB provides an opportunity to study the impact of technological and organizational changes on the mining industry as they take on their competitors. The section immediately after this gives an overview of related research on innovation networks and trust. This is followed by a description of the research methodology. The actual case study, including the empirical data obtained during our interviews at LKAB and MCC is then presented and analyzed. The paper ends with conclusions and suggestions for future research.