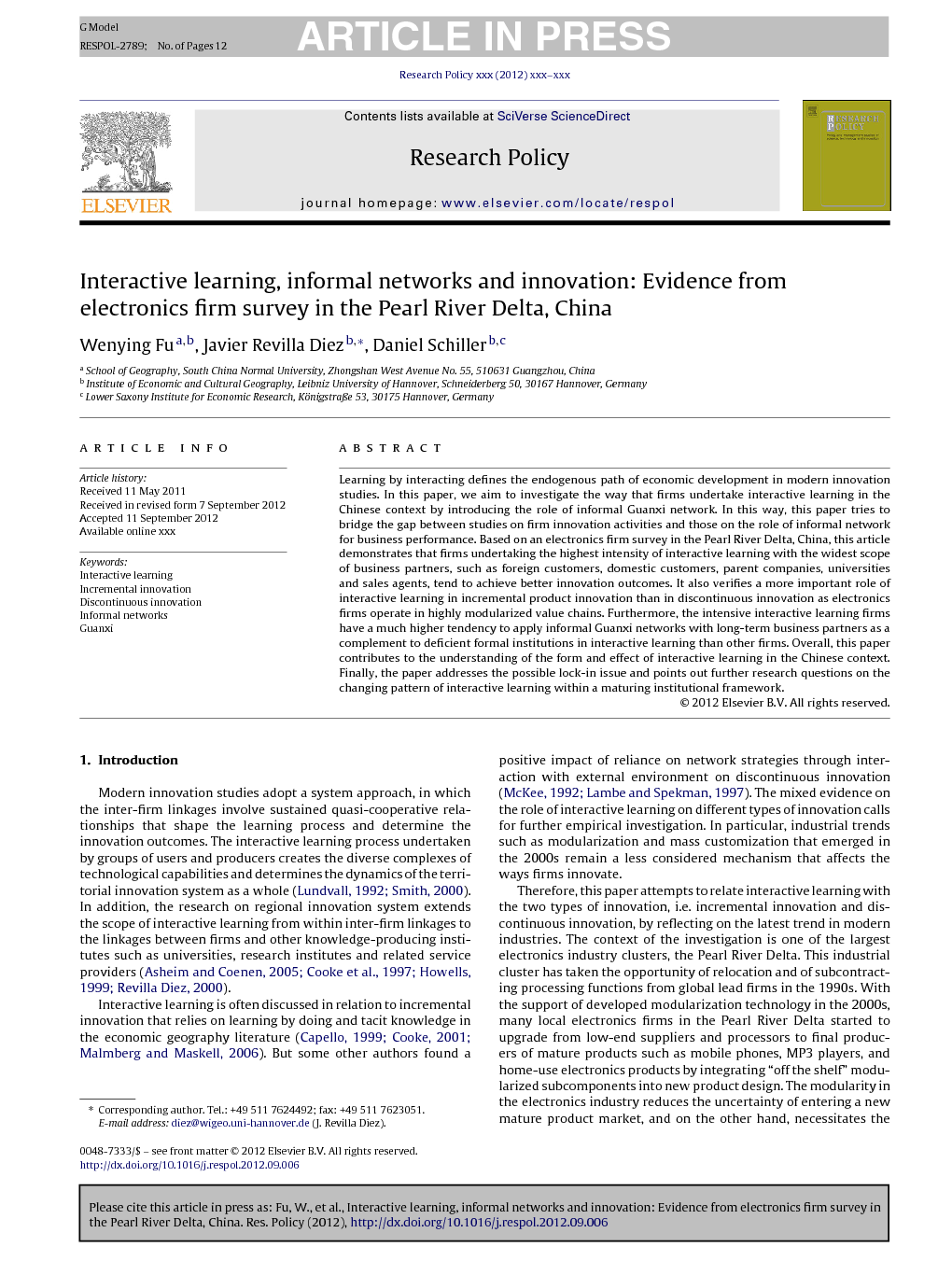 Modern innovation studies adopt a system approach, in which the inter-firm linkages involve sustained quasi-cooperative relationships that shape the learning process and determine the innovation outcomes. The interactive learning process undertaken by groups of users and producers creates the diverse complexes of technological capabilities and determines the dynamics of the territorial innovation system as a whole (Lundvall, 1992 and Smith, 2000). In addition, the research on regional innovation system extends the scope of interactive learning from within inter-firm linkages to the linkages between firms and other knowledge-producing institutes such as universities, research institutes and related service providers (Asheim and Coenen, 2005, Cooke et al., 1997, Howells, 1999 and Revilla Diez, 2000). Interactive learning is often discussed in relation to incremental innovation that relies on learning by doing and tacit knowledge in the economic geography literature (Capello, 1999, Cooke, 2001 and Malmberg and Maskell, 2006). But some other authors found a positive impact of reliance on network strategies through interaction with external environment on discontinuous innovation (McKee, 1992 and Lambe and Spekman, 1997). The mixed evidence on the role of interactive learning on different types of innovation calls for further empirical investigation. In particular, industrial trends such as modularization and mass customization that emerged in the 2000s remain a less considered mechanism that affects the ways firms innovate. Therefore, this paper attempts to relate interactive learning with the two types of innovation, i.e. incremental innovation and discontinuous innovation, by reflecting on the latest trend in modern industries. The context of the investigation is one of the largest electronics industry clusters, the Pearl River Delta. This industrial cluster has taken the opportunity of relocation and of subcontracting processing functions from global lead firms in the 1990s. With the support of developed modularization technology in the 2000s, many local electronics firms in the Pearl River Delta started to upgrade from low-end suppliers and processors to final producers of mature products such as mobile phones, MP3 players, and home-use electronics products by integrating “off the shelf” modularized subcomponents into new product design. The modularity in the electronics industry reduces the uncertainty of entering a new mature product market, and on the other hand, necessitates the interaction between specialized firms to explore the new market opportunities of new combinations within the current technological field. As such, the paper refreshes the theoretical discussion on the role of interactive learning on innovation through an empirical study in China. In addition, a theory-informed investigation into the way interactive learning is organized in the context of China has been made. Informal Guanxi networks are a key element of savoir-vivre for doing business in China and it has been proved by previous studies that they have a positive impact on reducing transaction costs and sustaining reliable and responsive supplier–customer relationships ( Luo, 2002, Meyer et al., 2009, Wu and Choi, 2004 and Zhou et al., 2003). However, the role of informal Guanxi networks in fostering interactive learning processes still remains unclear. As such, this article tries to bridge the gap between studies on firm innovation activities and studies on the role of Guanxi network for business performance. Beyond that, it aims to find out how Guanxi networks with long-term business partners differentiate itself from those with relatives and friends, and whether one of them serves as a viable strategy to complement the deficient formal institutional environment in China. The selection of a partner with whom a firm establishes a Guanxi network determines the degree to which they share similar technical and market knowledge. The extent of ‘cognitive proximity’ (Boschma, 2005) is an elementary factor for effective interactive learning. Overall, by investigating the willingness and capacity of electronics firms in the Pearl River Delta, China, to undertake interactive learning in product innovation activities, this article sheds light on the innovation mechanism in the Chinese industrial clusters. In the face of the global recession and domestic inflation, the capacity of Chinese firms to draw on innovation externalities is of great importance for regional structural adjustments and long-term development. The empirical substances, i.e. a uniquely designed firm survey directly collected from managers of electronics firms in the Pearl River Delta, China, enables the further understanding of social factors (Guanxi) that facilitate innovation in the Chinese context, in which the institutional framework is quite different from that in industrialized countries. The remainder of this article is structured as follows: the second section elucidates the interactive process of innovation activities and discusses how different types of Guanxi networks assist firms in interactive learning activities in the Chinese institutional setup. Two hypotheses are derived based on the theoretical discussion. The third section presents the dataset, related parameters and the methodology applied. The fourth section discusses the empirical results. The fifth section concludes and discusses policy implications.

Learning by interacting generates increasing return for the internal learning by doing and learning by using, creating positive externalities for the whole economy (Lundvall, 2005). The complementary role of interactive learning to internal efforts lies both in assisting firms in acquiring information to make innovation-related decisions, and in supporting firms with necessary support of equipment and know-how for problem-solving during the implementation process. The scope of interaction covers the learning with customers with regard to sector product-field-specific knowledge as well as learning with universities and research institutes with regard to generally applicable knowledge. Based on the latent class model, we are able to identify three groups of firms that show an increasing degree of interactive learning activities. The third group, which includes only about one-fifth of the surveyed firms, undertakes the widest scope and highest intensity of interactive learning activities. For these intensive interactive learners, recommendation by long-term business partners through the Guanxi networks is used as an informal means of complementing the deficient formal institutions in China. Due to cognitive distance with firms in market and technical knowledge, Guanxi network through recommendations by friends and relatives is rarely applied as a way to establish interaction with external partners. Descriptive and causal difference-in-difference analysis further verifies that the scope and intensity of interactive learning contribute more to incremental product innovation outcomes than to discontinuous ones. The empirical investigation reveals a clear pattern of using interactive learning in China, in which firms interact via a combination of formal institutions and informal Guanxi networks among long-term business partners to exploit the tacit knowledge in modularized industries like electronics, rather than to support the entry into a new product market. This line of thinking – that social capital is an important asset for organizing interactive learning and markets – is well covered by the institutional and cultural turn in many disciplines. In new growth theory, productive new ideas are endogenously shaped by institutional contexts (Romer, 1986). The approach of innovation systems proposes that social capital induces widely spread interactive learning in the whole economy, hence creating more net wealth (Lundvall, 2005). Likewise, the new institutionalism in economic geography embraces again the context-dependent epistemology, considering the possibility that the various social institutions in places determine the evolution of economic landscape (Clark et al., 2003). Interactive learning embedded in the social context has important policy implications. By recognizing the insufficiency of arms-length market relations in organizing systematically interactive learning activities, it calls for policy action to solve the market failure in this respect. According to Smith's (2000) identification of the areas of market and system failure, the public sector can act in the following areas: creating appropriate rules of the game in order to give enough incentive for firms to undertake interactive learning and support their capability in transforming it into profit, coordinating systematic change in the face of technological and market change, and providing infrastructure that can resist market failure, such as universities, research institutes, regulatory agencies and data banks. Moreover, as indicated in our theoretical discussion, the informal Guanxi networks among long-term business partners with close cognitive proximity are important social assets in the Chinese context that the firms can take advantage of in achieving effective interactive learning. The empirical results also demonstrate that both domestic firms and foreign firms embed informal social networks in interactive learning as a way to promote product innovation. However, the foreign electronics firms do not show great interest in undertaking product innovation in the Pearl River Delta, China. Therefore, the Chinese government should encourage the foreign firms to be involved more actively in product innovation with measures such as tax reduction, subsidies and permits for domestic market access, for the interactive learning organized by foreign firms in the product innovation process is expected to generate knowledge spillover from the foreign sector to the domestic sector. This paper contributes to the understanding of the role of interactive learning assisted by informal social networks in promoting incremental innovation activities in the context of China, where innovation is high on the agenda to revitalize economic growth in the face of external market change and domestic inflation pressure. However, Boschma (2005) indicates that too much commitment to social networks might induce a lock-in effect and underestimation related to the risk of opportunism. In China, it can be expected that firms resort less to social networks when stability-induced institutions are in place. Therefore, it is important to trace the interactive learning pattern and relate its evolution to the maturing institutional framework conditions in future research.