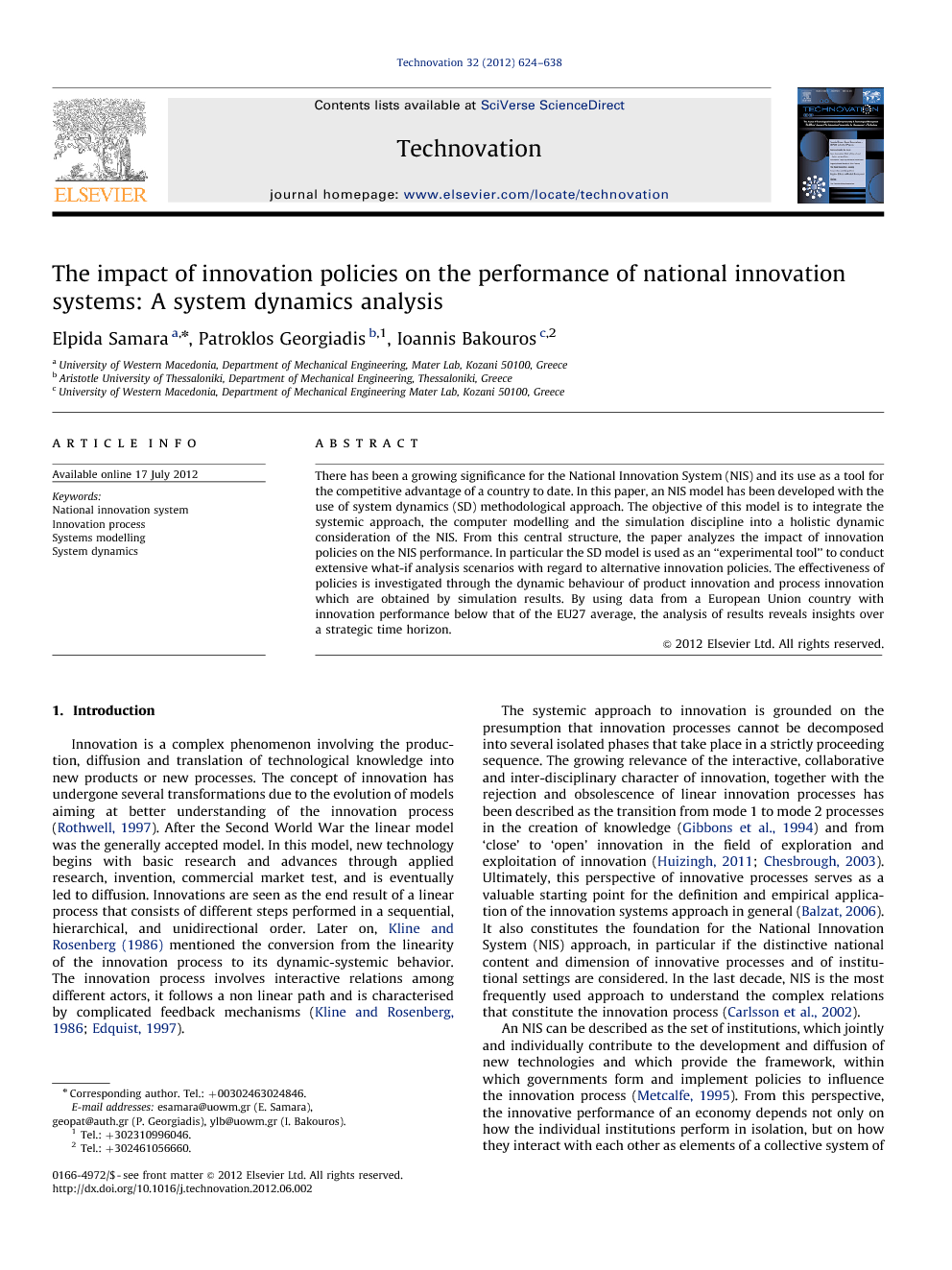 There has been a growing significance for the National Innovation System (NIS) and its use as a tool for the competitive advantage of a country to date. In this paper, an NIS model has been developed with the use of system dynamics (SD) methodological approach. The objective of this model is to integrate the systemic approach, the computer modelling and the simulation discipline into a holistic dynamic consideration of the NIS. From this central structure, the paper analyzes the impact of innovation policies on the NIS performance. In particular the SD model is used as an “experimental tool” to conduct extensive what-if analysis scenarios with regard to alternative innovation policies. The effectiveness of policies is investigated through the dynamic behaviour of product innovation and process innovation which are obtained by simulation results. By using data from a European Union country with innovation performance below that of the EU27 average, the analysis of results reveals insights over a strategic time horizon.

In this paper, we have developed a SD-based model that provides the dynamic analysis of the impact of innovation policies on the performance of an NIS. Formulating innovation performance as the output of many independent variables, the model supports policy makers to reveal structures for generating change and also develop and test strategies for the government. Simulation results under alternative policies and scenario settings show that a combination of sustained efforts is needed to strengthen innovative behaviours. Based on these results policy makers are suggested to formulate a strategy characterized by symmetry in its objectives, aiming at improving a set of performance indicators even in a moderate rate compared to targets set by isolated aggressive upgrading policies. Simulation results also reveal that improvement of innovation performance is a long-term target that requires continuous and systematic efforts, since many policies that affect the system interrelate with the national, economic, institutional and social environment. Hence, governments and regulators should not expect the improvement to appear over short-term cycles. The presented model establishes SD as an appropriate method for the development of dynamic models to deal with the structural and functional complexity of the innovation processes at a national level. This study integrates the simulation discipline and the theory of nonlinear dynamics and feedback control into a dynamic consideration of the NIS. The approach provides an “experimental” tool to reproduce historic results, test the efficiency of alternative innovation-policy scenarios both individually and in combination, and reveal effective policy suggestions. The paper also presents an application of this experimentation for the case of Greece. The key finding is that the institutional conditions have shown the greatest impact on innovation performance; however, aggressive upgrading policies still result in partial innovative behaviors. The conclusions of this paper may be inappropriate for other European countries, since they are based on the Greek case. However, for countries like Czech Republic, Cyprus, Estonia, Italy, Portugal, Slovenia and Spain, which according to EIS categorization belong to a group of countries exhibiting the same SII score as Greece, the results of such analyses might be similar. Hence, an interesting direction for future research is to conduct comparative studies between E.U. countries that belong to groups with significantly different SII scores. Furthermore, the results do not exhaust the possibilities of investigating all the effects of innovation policies on the performance of an NIS. The versatility of the model, allows for suitable modifications to investigate other effects. For instance, it would be useful to study the effect due to the existence and operation of clusters that function in sectoral and regional levels.