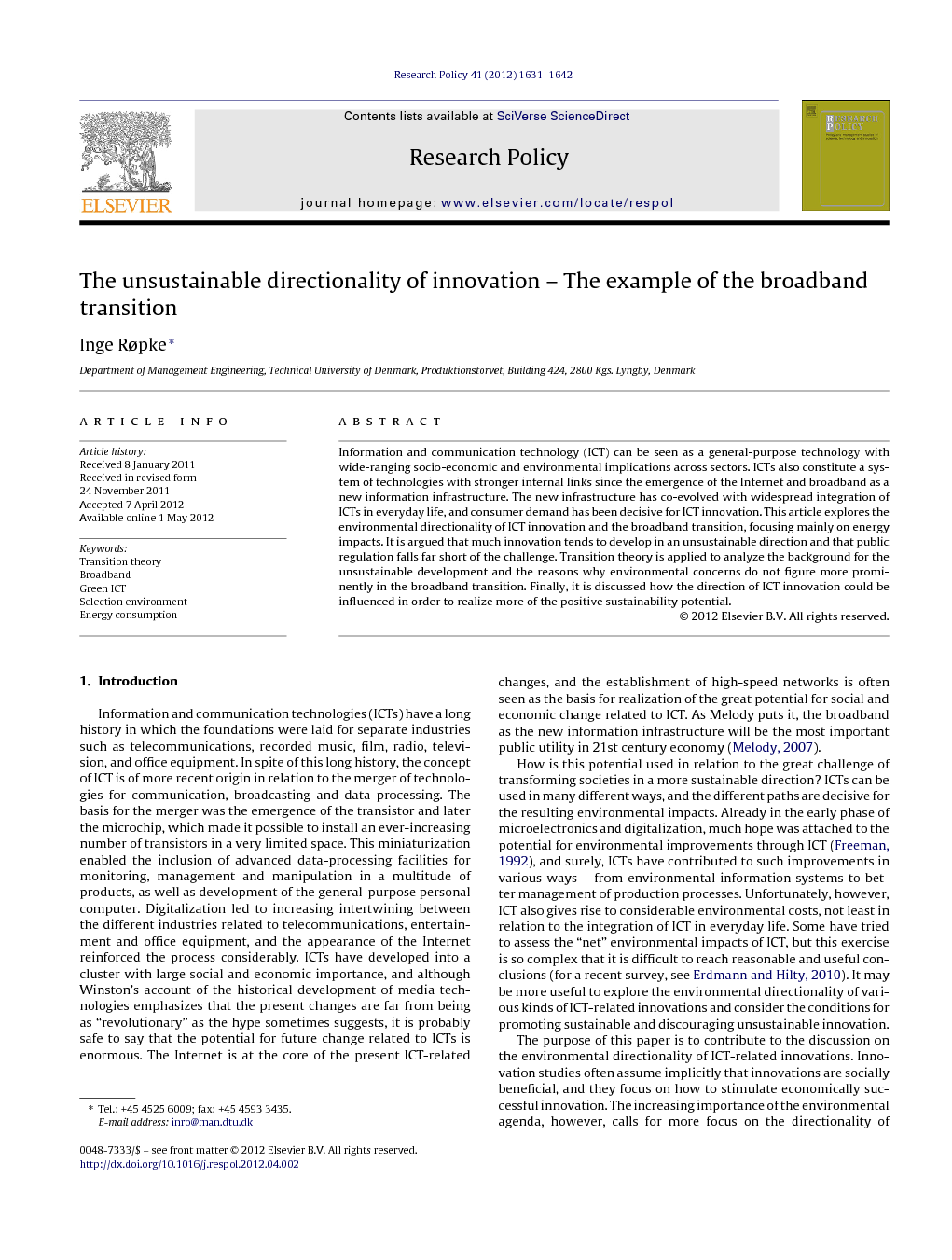 Information and communication technology (ICT) can be seen as a general-purpose technology with wide-ranging socio-economic and environmental implications across sectors. ICTs also constitute a system of technologies with stronger internal links since the emergence of the Internet and broadband as a new information infrastructure. The new infrastructure has co-evolved with widespread integration of ICTs in everyday life, and consumer demand has been decisive for ICT innovation. This article explores the environmental directionality of ICT innovation and the broadband transition, focusing mainly on energy impacts. It is argued that much innovation tends to develop in an unsustainable direction and that public regulation falls far short of the challenge. Transition theory is applied to analyze the background for the unsustainable development and the reasons why environmental concerns do not figure more prominently in the broadband transition. Finally, it is discussed how the direction of ICT innovation could be influenced in order to realize more of the positive sustainability potential.

Information and communication technologies (ICTs) have a long history in which the foundations were laid for separate industries such as telecommunications, recorded music, film, radio, television, and office equipment. In spite of this long history, the concept of ICT is of more recent origin in relation to the merger of technologies for communication, broadcasting and data processing. The basis for the merger was the emergence of the transistor and later the microchip, which made it possible to install an ever-increasing number of transistors in a very limited space. This miniaturization enabled the inclusion of advanced data-processing facilities for monitoring, management and manipulation in a multitude of products, as well as development of the general-purpose personal computer. Digitalization led to increasing intertwining between the different industries related to telecommunications, entertainment and office equipment, and the appearance of the Internet reinforced the process considerably. ICTs have developed into a cluster with large social and economic importance, and although Winston's account of the historical development of media technologies emphasizes that the present changes are far from being as “revolutionary” as the hype sometimes suggests, it is probably safe to say that the potential for future change related to ICTs is enormous. The Internet is at the core of the present ICT-related changes, and the establishment of high-speed networks is often seen as the basis for realization of the great potential for social and economic change related to ICT. As Melody puts it, the broadband as the new information infrastructure will be the most important public utility in 21st century economy (Melody, 2007). How is this potential used in relation to the great challenge of transforming societies in a more sustainable direction? ICTs can be used in many different ways, and the different paths are decisive for the resulting environmental impacts. Already in the early phase of microelectronics and digitalization, much hope was attached to the potential for environmental improvements through ICT (Freeman, 1992), and surely, ICTs have contributed to such improvements in various ways – from environmental information systems to better management of production processes. Unfortunately, however, ICT also gives rise to considerable environmental costs, not least in relation to the integration of ICT in everyday life. Some have tried to assess the “net” environmental impacts of ICT, but this exercise is so complex that it is difficult to reach reasonable and useful conclusions (for a recent survey, see Erdmann and Hilty, 2010). It may be more useful to explore the environmental directionality of various kinds of ICT-related innovations and consider the conditions for promoting sustainable and discouraging unsustainable innovation. The purpose of this paper is to contribute to the discussion on the environmental directionality of ICT-related innovations. Innovation studies often assume implicitly that innovations are socially beneficial, and they focus on how to stimulate economically successful innovation. The increasing importance of the environmental agenda, however, calls for more focus on the directionality of innovations, including both the encouragement of green innovation and the discouragement of environmentally problematic innovation. The paper thus explores the following questions: What are the environmental implications of ICT innovation and the broadband transition? How are the environmental impacts influenced by public regulation? Why do environmental concerns not figure more prominently? And how could the direction of ICT innovation be influenced in order to realize more of the positive sustainability potential? ICT has many different environmental impacts, but this paper concentrates mainly on the energy impacts, which are more topical than ever due to the climate change agenda. Experience with regulation is extensive with regard to energy impact, and the data availability is good. The paper is partly based on a previous empirical study on the use of ICT in Danish households and the related energy impacts (reported in detail in Røpke et al., 2010a and Røpke et al., 2010b), combined with studies of government and business reports, and participant observations from business conferences related to broadband development. In addition, the paper brings together three different sets of literature, which tend to develop in isolation from one another: economic studies on ICT, studies on ICT and the environment, and sustainable transition studies. The paper starts by introducing different perspectives on the integration of ICT in the economy and everyday life. In particular, the meso-level perspective is elaborated, seeing ICTs as forming a cluster of technologies and industries that can be studied as a system. Then, Section 3 outlines the energy impacts of ICT-related development, and Section 4 highlights how public intervention deals with these impacts. Since energy regulation has not succeeded in curbing the growing ICT-related energy consumption nor in realizing the sustainability potential of ICT, Section 5 explores why environmental considerations do not figure more prominently in innovation processes. This section brings in transition theory to organize the discussion. The concluding section summarizes the results and discusses the conditions for promoting a more sustainable direction in innovations.