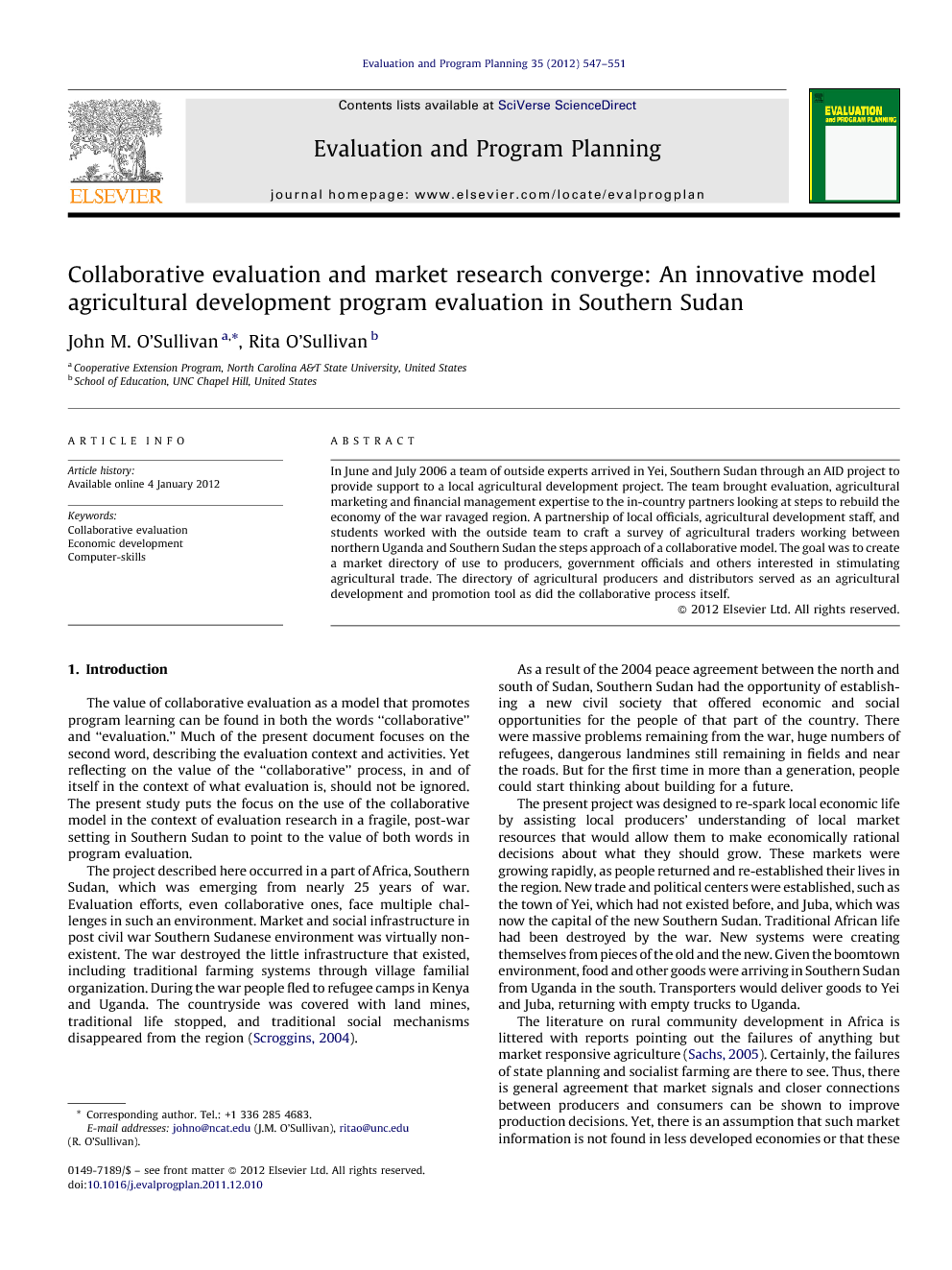 The value of collaborative evaluation as a model that promotes program learning can be found in both the words “collaborative” and “evaluation.” Much of the present document focuses on the second word, describing the evaluation context and activities. Yet reflecting on the value of the “collaborative” process, in and of itself in the context of what evaluation is, should not be ignored. The present study puts the focus on the use of the collaborative model in the context of evaluation research in a fragile, post-war setting in Southern Sudan to point to the value of both words in program evaluation. The project described here occurred in a part of Africa, Southern Sudan, which was emerging from nearly 25 years of war. Evaluation efforts, even collaborative ones, face multiple challenges in such an environment. Market and social infrastructure in post civil war Southern Sudanese environment was virtually non-existent. The war destroyed the little infrastructure that existed, including traditional farming systems through village familial organization. During the war people fled to refugee camps in Kenya and Uganda. The countryside was covered with land mines, traditional life stopped, and traditional social mechanisms disappeared from the region (Scroggins, 2004). As a result of the 2004 peace agreement between the north and south of Sudan, Southern Sudan had the opportunity of establishing a new civil society that offered economic and social opportunities for the people of that part of the country. There were massive problems remaining from the war, huge numbers of refugees, dangerous landmines still remaining in fields and near the roads. But for the first time in more than a generation, people could start thinking about building for a future. The present project was designed to re-spark local economic life by assisting local producers’ understanding of local market resources that would allow them to make economically rational decisions about what they should grow. These markets were growing rapidly, as people returned and re-established their lives in the region. New trade and political centers were established, such as the town of Yei, which had not existed before, and Juba, which was now the capital of the new Southern Sudan. Traditional African life had been destroyed by the war. New systems were creating themselves from pieces of the old and the new. Given the boomtown environment, food and other goods were arriving in Southern Sudan from Uganda in the south. Transporters would deliver goods to Yei and Juba, returning with empty trucks to Uganda. The literature on rural community development in Africa is littered with reports pointing out the failures of anything but market responsive agriculture (Sachs, 2005). Certainly, the failures of state planning and socialist farming are there to see. Thus, there is general agreement that market signals and closer connections between producers and consumers can be shown to improve production decisions. Yet, there is an assumption that such market information is not found in less developed economies or that these mechanisms cannot exist in the types of situations where communication is less than ideal or even quite difficult. Markets, it should be understood, are complex embedded institutions by which societies connect supply and demand and social attributes for its food production is communicated through the actions of buying and selling (Hinrichs, 2000). The U.S. Agency for International Development in partnership with the government of Southern Sudan thought to apply market responsive agriculture principles in funding the Agricultural Market and Enterprise Development (AMED). As part of this project, Winrock International gathered a team of three external evaluators to travel to Southern Sudan to conduct a market evaluation that would result in a trader/transporter/grain miller directory for the region. The evaluation effort was to identify wholesalers and transporters along the Juba, Yei, and Arua, Uganda, corridor, so that farmers could connect with them in order to support sound farm production decision-making. With this directory the project hoped that agricultural production could begin anew based on information about what markets might exist. The external team for the market evaluation used a collaborative approach for the work. The purpose of this paper is to explain the contextual factors that supported the use of a collaborative approach, discuss how the collaborative evaluation was conducted, and then share reflections about the perceived strengths of the approach (Jordan & Constance, 2008).