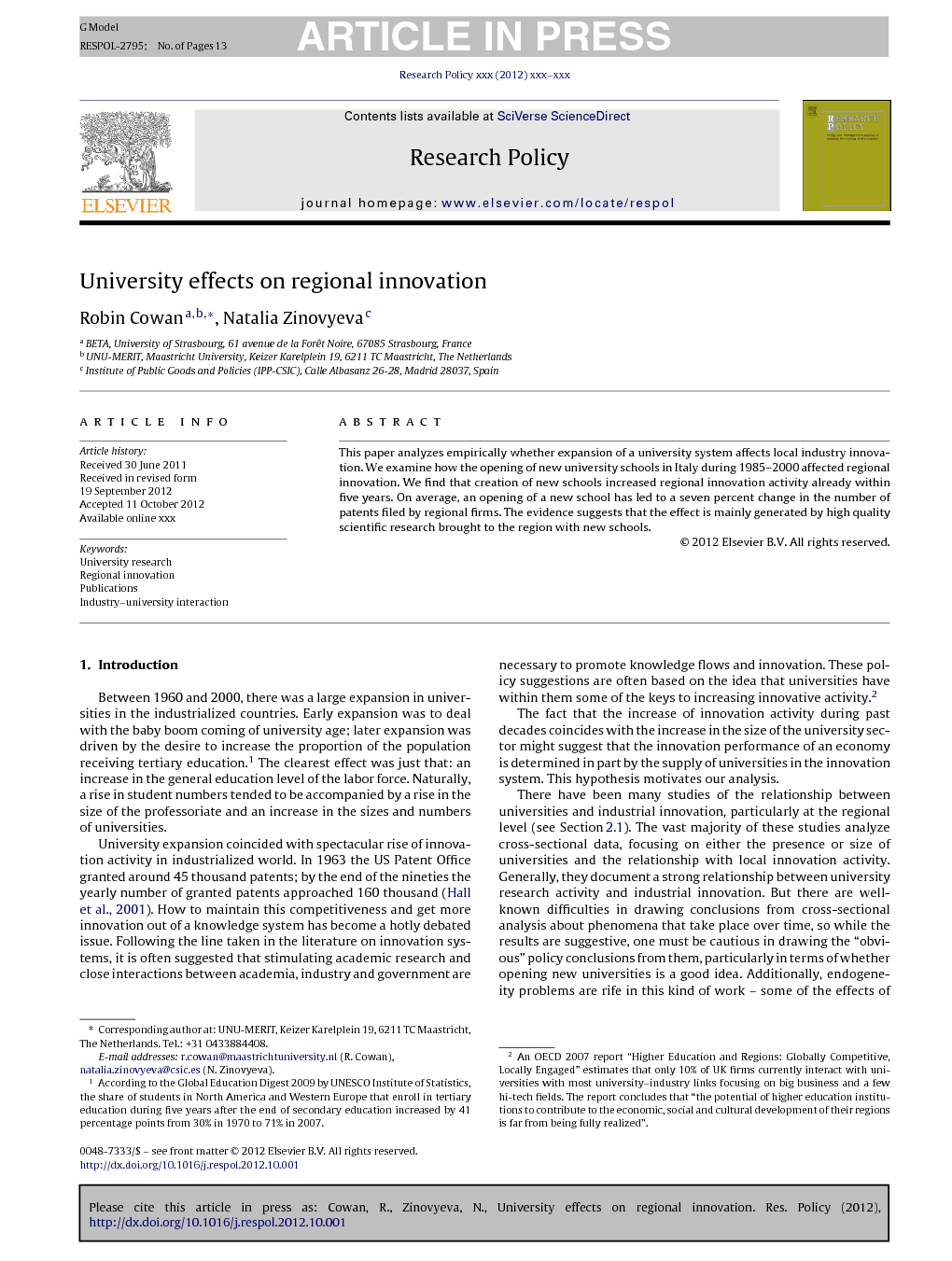 This paper analyzes empirically whether expansion of a university system affects local industry innovation. We examine how the opening of new university schools in Italy during 1985–2000 affected regional innovation. We find that creation of new schools increased regional innovation activity already within five years. On average, an opening of a new school has led to a seven percent change in the number of patents filed by regional firms. The evidence suggests that the effect is mainly generated by high quality scientific research brought to the region with new schools.

In this paper we focus on the economic effects of universities, and in particular on their effects on innovation. It is widely believed that the presence of a university in a region is beneficial for industrial innovation activity. We have taken advantage of certain unusual features of university expansion in Italy during the 1980s and 1990s in an attempt to identify the effect of university presence on regional innovation. According to ex post evaluation of the expansion programmes, university schools were created “like rain”, independently of underlying economic features of the regions. This experiment permits a nice way out of standard endogeneity problems. Our first result indicates that there is indeed a significant effect of the creation of new university schools on regional innovation activity. Industrial patenting activity in the region increases quite significantly even within five years of a new school opening. Thus the general impression seems to be correct: university activity is positively correlated with local innovation activity, and a policy tool to increase the latter is indeed to increase the former. The effect of new schools depends on the economic characteristics of the area. Poor regions with low levels of R&D and human capital investment are the ones that benefit most from an increase in university presence. This suggests that one role of universities is to fill gaps in missing R&D infrastructure. If this is the case, and if there are positive feedbacks in innovation dynamics, then opening a university in an innovation-poor region can be an effective part of a development strategy for that region. Our results suggest that in an initial period when the region is poorly endowed with “innovation assets”, the university presence can compensate. This, under the proviso that other necessary assets are present, could help to push a region onto a higher innovation path. How are these benefits created? Marshall might suggest that it arises simply from the agglomeration of agents pursuing related activities; Mike Lazaridis22 asserts that it arises through the production of highly trained graduates; supporters of the Bayh-Dole act assert that it comes from controlled technology transfer through academic patenting. Given the time frame we examine, namely effects within 5 years of a school opening, we exclude from the analysis any effects of universities driven by the new graduates who enter regional labor markets. To address the question of other channels through which this influence flows, we have performed an accounting exercise estimating how the gross effect of increasing the number of universities is affected when we add to the model proxies of factors that might be intermediary in the process. The factors that we focus on include professors’ ability to produce scientific research and their ability to produce patentable inventions. We measure the former by the number of ISI publications and the latter by the number of patent applications done with the participation of academic inventors. We observe that the human capital associated with traditional university production, as measured by scientific publications and their citations, has a strong effect on innovation, whereas academic patents cannot explain observed university effects. At the same time, we do not exclude the possibility that other types of academic human capital, apart from the ability to produce frontier research, could be relevant as well. Such competences as collecting, generalizing and classifying existent knowledge might be relevant for industrial inventors. Universities perform many activities, and contain many varieties of skill and knowledge. Almost certainly it is a mixture of skills and knowledge that serves the interests of the local economy. However, the results presented in this paper suggest that it is possible to tilt the skill set in directions that are not in fact useful. They suggest that forcing universities to change tack towards more applied research may not, in fact, provide for the needs of local industry. At the very least, introducing patenting activity as a new measure of university performance may not capture what matters, and, in the face of Goodheart's law, as a policy tool to make universities more relevant to industry may be self-defeating. The traditional tool that values high-quality scientific research may remain more to the point.