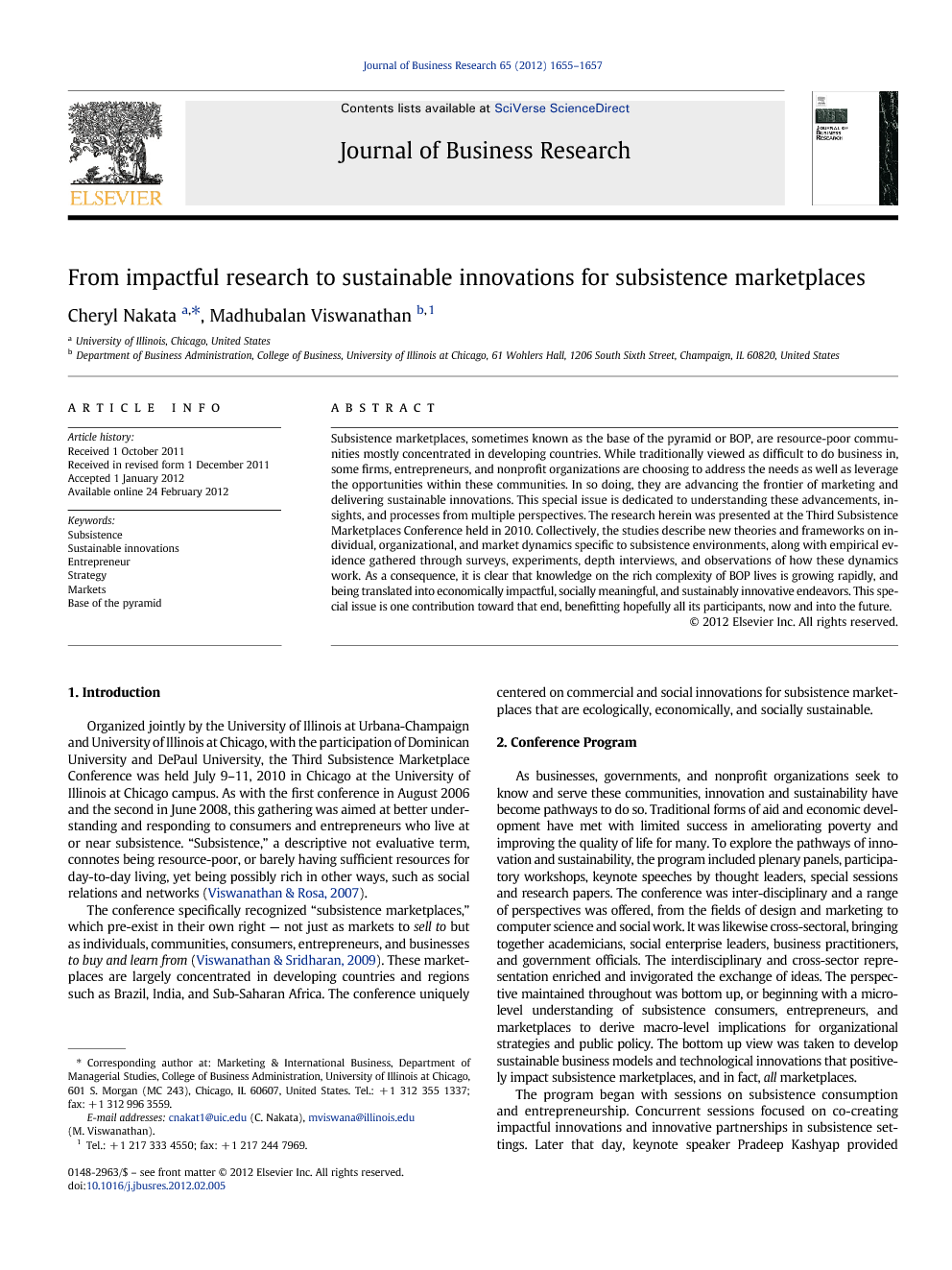 Subsistence marketplaces, sometimes known as the base of the pyramid or BOP, are resource-poor communities mostly concentrated in developing countries. While traditionally viewed as difficult to do business in, some firms, entrepreneurs, and nonprofit organizations are choosing to address the needs as well as leverage the opportunities within these communities. In so doing, they are advancing the frontier of marketing and delivering sustainable innovations. This special issue is dedicated to understanding these advancements, insights, and processes from multiple perspectives. The research herein was presented at the Third Subsistence Marketplaces Conference held in 2010. Collectively, the studies describe new theories and frameworks on individual, organizational, and market dynamics specific to subsistence environments, along with empirical evidence gathered through surveys, experiments, depth interviews, and observations of how these dynamics work. As a consequence, it is clear that knowledge on the rich complexity of BOP lives is growing rapidly, and being translated into economically impactful, socially meaningful, and sustainably innovative endeavors. This special issue is one contribution toward that end, benefitting hopefully all its participants, now and into the future.

Organized jointly by the University of Illinois at Urbana-Champaign and University of Illinois at Chicago, with the participation of Dominican University and DePaul University, the Third Subsistence Marketplace Conference was held July 9–11, 2010 in Chicago at the University of Illinois at Chicago campus. As with the first conference in August 2006 and the second in June 2008, this gathering was aimed at better understanding and responding to consumers and entrepreneurs who live at or near subsistence. “Subsistence,” a descriptive not evaluative term, connotes being resource-poor, or barely having sufficient resources for day-to-day living, yet being possibly rich in other ways, such as social relations and networks (Viswanathan & Rosa, 2007). The conference specifically recognized “subsistence marketplaces,” which pre-exist in their own right — not just as markets to sell to but as individuals, communities, consumers, entrepreneurs, and businesses to buy and learn from (Viswanathan & Sridharan, 2009). These marketplaces are largely concentrated in developing countries and regions such as Brazil, India, and Sub-Saharan Africa. The conference uniquely centered on commercial and social innovations for subsistence marketplaces that are ecologically, economically, and socially sustainable.