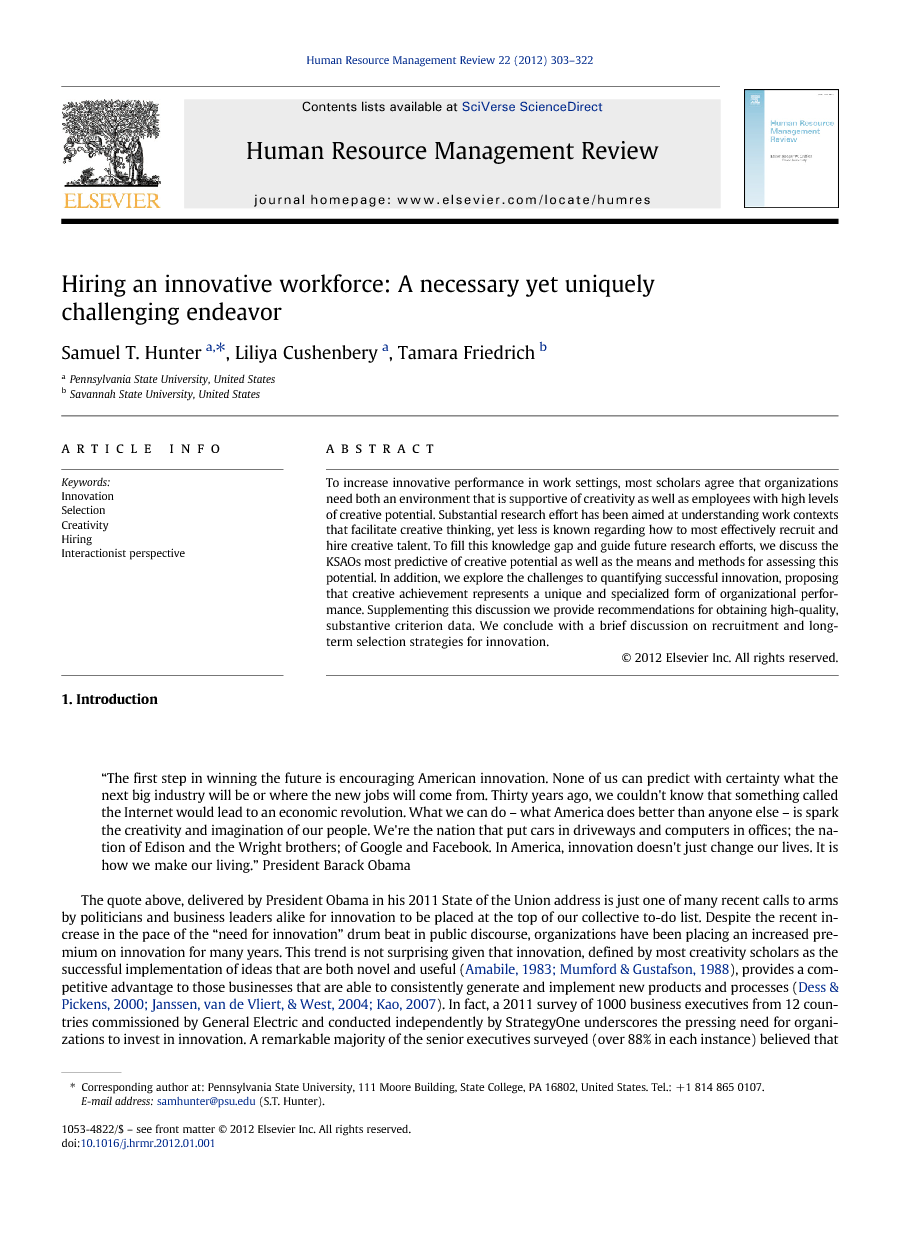 To increase innovative performance in work settings, most scholars agree that organizations need both an environment that is supportive of creativity as well as employees with high levels of creative potential. Substantial research effort has been aimed at understanding work contexts that facilitate creative thinking, yet less is known regarding how to most effectively recruit and hire creative talent. To fill this knowledge gap and guide future research efforts, we discuss the KSAOs most predictive of creative potential as well as the means and methods for assessing this potential. In addition, we explore the challenges to quantifying successful innovation, proposing that creative achievement represents a unique and specialized form of organizational performance. Supplementing this discussion we provide recommendations for obtaining high-quality, substantive criterion data. We conclude with a brief discussion on recruitment and long-term selection strategies for innovation.

“The first step in winning the future is encouraging American innovation. None of us can predict with certainty what the next big industry will be or where the new jobs will come from. Thirty years ago, we couldn't know that something called the Internet would lead to an economic revolution. What we can do – what America does better than anyone else – is spark the creativity and imagination of our people. We're the nation that put cars in driveways and computers in offices; the nation of Edison and the Wright brothers; of Google and Facebook. In America, innovation doesn't just change our lives. It is how we make our living.” President Barack Obama The quote above, delivered by President Obama in his 2011 State of the Union address is just one of many recent calls to arms by politicians and business leaders alike for innovation to be placed at the top of our collective to-do list. Despite the recent increase in the pace of the “need for innovation” drum beat in public discourse, organizations have been placing an increased premium on innovation for many years. This trend is not surprising given that innovation, defined by most creativity scholars as the successful implementation of ideas that are both novel and useful (Amabile, 1983 and Mumford and Gustafson, 1988), provides a competitive advantage to those businesses that are able to consistently generate and implement new products and processes (Dess and Picken, 2000, Janssen et al., 2004 and Kao, 2007). In fact, a 2011 survey of 1000 business executives from 12 countries commissioned by General Electric and conducted independently by StrategyOne underscores the pressing need for organizations to invest in innovation. A remarkable majority of the senior executives surveyed (over 88% in each instance) believed that innovation was critical to creating a more competitive economy, developing green initiatives, and, most important in the present economy, creating new jobs (GE Global Innovation Barometer, 2011). Additionally, a recent employment survey conducted by the National Science Foundation found that companies that conducted or provided funding for research and development related work had over 7% of their workforce devoted specifically to R&D activities (Moris & Kannankutty, 2010). With innovation emerging as a key priority for a significant portion of the workforce, it becomes imperative that organizations be adequately prepared to recruit, select, and retain individuals capable of undertaking the difficult work of innovation. More generally, the growing emphasis on enhancing innovation has led to the emergence of a fundamental and persistent question: How do organizations most effectively develop and pursue a strategy for creative performance? The bulk of the research on creative thinking and innovation suggests that the answer will be found via the interactionist model of innovation, where creative performance is theorized to emerge from the interplay between the context and the individual (Amabile, 1996, Mumford and Gustafson, 1988, Oldham and Cummings, 1996, Woodman et al., 1993 and Woodman et al., 1989). While organizations continue to make strides in demonstrating their prioritization of innovation and in promoting environments that support it, the other component of the interactionist perspective is often more difficult to implement — the human resources practices that aim to build a creative workforce. The research on innovation follows a similar pattern as the applied discussion above. For instance, a rich body of research has emerged about work environments that support and enhance innovation (e.g., Amabile, 1983, Amabile, 1988, Amabile, 1996, Andrews and Farris, 1972, Ekvall, 1996, Knapp, 1963 and Woodman et al., 1993). In fact, a recent meta-analysis on creative climate revealed that there were over 45 differing taxonomies used to classify creative context (Hunter et al., 2007). However, less research effort has been aimed at understanding how to best supply the talent for innovative endeavors. Given that employee creative potential stands as a necessary pre-condition for innovation in organizations (Mumford, 2000), there appears to be a sizable knowledge gap in how to most effectively pursue and execute a strategy for innovation. In an effort to fill this gap, three primary issues are addressed in the present effort. First, we outline the building blocks of any successful HR practice — the key knowledge, skills, abilities, and “other” (KSAO) attributes most predictive of creativity and innovation. In this discussion, we offer some guidance as to which KSAOs may be most useful for predicting innovative outcomes. Supplementing this discussion we consider other critical elements of the Human Resources process, including differing selection and assessment approaches that may be used in capturing creative and innovative potential, means for acquiring criterion data necessary for performance appraisals and associated challenges in assessing creative performance, recommendations on effective recruitment of creative talent, and long-term selection strategies for building and sustaining an innovative workforce.

The aggregate of the present effort reveals a number of broader points that appear worthy of discussion. First, creative performance is an elusive construct and an attempt to apply traditional performance assessment techniques to capture it as a criterion will prove problematic. Instead, we must be cognizant of what creativity entails and, excuse the expression, be creative in our approach to gathering outcome data. This realization has a number of implications for how we approach appraising creative performance and stands as an interesting area for future research. The present effort also reveals that creative performance is likely to be facilitated by a number of predictors ranging quite broadly across the KSAO spectrum. As scholars we have, at times, overemphasized creative personality and divergent thinking ability as the sole predictors of creative performance. Thus, as Mumford and Gustafson (1988) concluded, creativity is indeed a syndrome and requires a broader, multivariate approach in a selection context. Moreover, as we expand our predictor set, interplay among creative predictors also stands as an interesting and important area for future research. Congruent with the interactionist theme, the discussion on contextual moderators reveals that caution is warranted in blindly applying a host of tools to predict creative performance — better known, perhaps, as the “shotgun” approach. Instead, care is necessary in assessing the current environment as well as the goals of the selection system. For example, an organization with a history of rigidity and emphasis on cost efficiency seeking to become innovative may need to hire employees with personality traits that facilitate fighting against norms. In contrast, an organization that has an established record of innovation and places great emphasis on teamwork and collaboration may choose to emphasize creativity specific skills and abilities, avoiding some of the acerbic personality traits associated with innovation in caustic environments. Additionally, organizations must not forget the key role that recruitment plays in building the base of creative talent and ensuring variability in the selection pool. The discussion on contextual moderators reveals that context matters not only in facilitating creative performance but also in attracting talent to that organization. Organizations are well served by publicizing their approach to innovation — particularly if their approach distinguishes themselves from other organizations competing for creative employees. Finally, as much as we would like to prescribe a formula for selection, creative achievement is a messy, complex, and challenging endeavor. It is not, unfortunately, akin to setting one's watch and anticipating today's creative lightning to strike. A more realistic approach is to establish an environment where lightning can occur by ensuring that talented individuals are interacting with each other on a frequent basis and they have the resources around them to fully and continually pursue novel ideas. This may require, at times, the acquisition of talent that may not have an immediate project role but fits within the broader organizational strategy and project portfolio scaffolding. In sum, the acquisition of creative talent is an important pre-condition for creative performance. Although hiring the right people is only an initial step in building an organization with innovative capacity, it is a key first step. We believe the present effort will help organizational decision makers and researchers better pursue this critical endeavor.