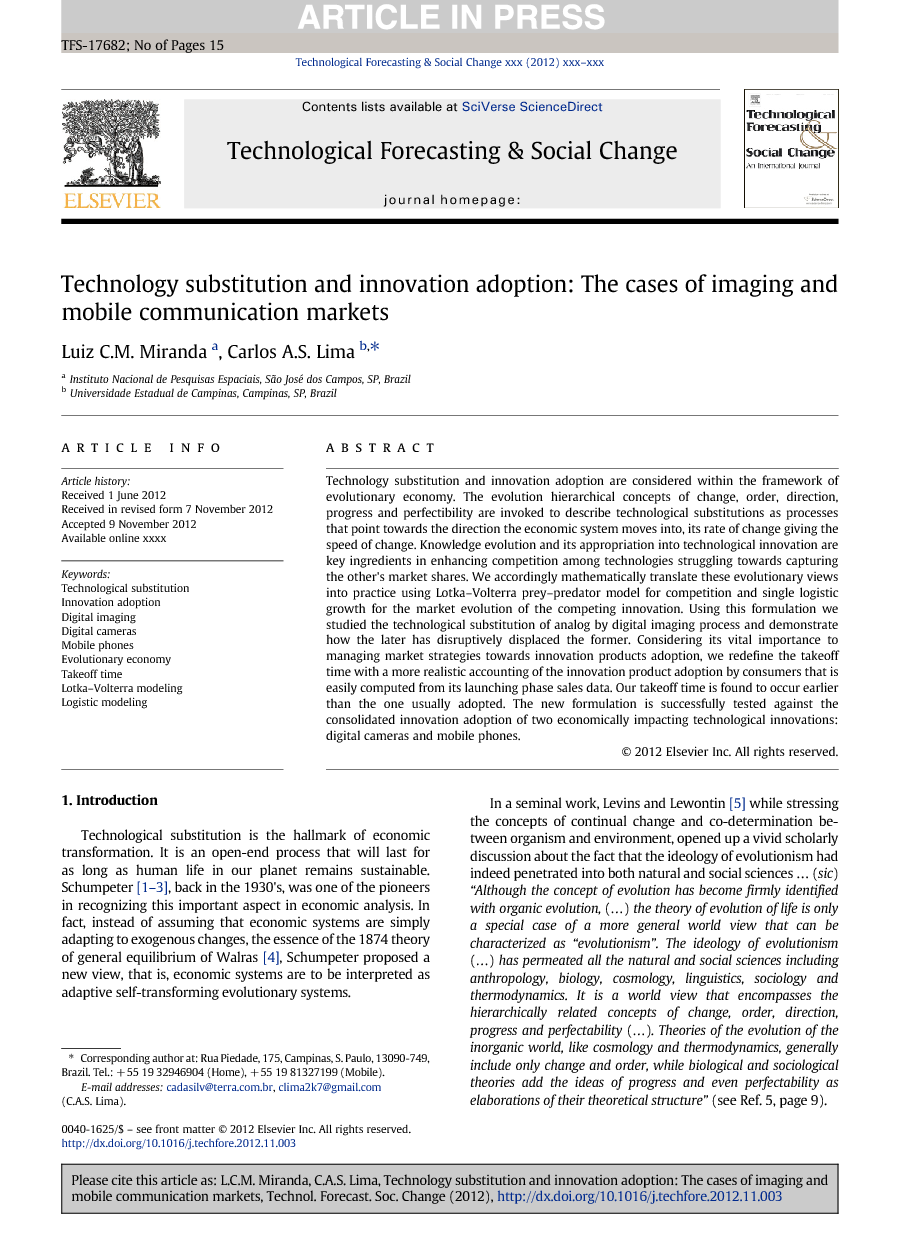 Technology substitution and innovation adoption are considered within the framework of evolutionary economy. The evolution hierarchical concepts of change, order, direction, progress and perfectibility are invoked to describe technological substitutions as processes that point towards the direction the economic system moves into, its rate of change giving the speed of change. Knowledge evolution and its appropriation into technological innovation are key ingredients in enhancing competition among technologies struggling towards capturing the other's market shares. We accordingly mathematically translate these evolutionary views into practice using Lotka–Volterra prey–predator model for competition and single logistic growth for the market evolution of the competing innovation. Using this formulation we studied the technological substitution of analog by digital imaging process and demonstrate how the later has disruptively displaced the former. Considering its vital importance to managing market strategies towards innovation products adoption, we redefine the takeoff time with a more realistic accounting of the innovation product adoption by consumers that is easily computed from its launching phase sales data. Our takeoff time is found to occur earlier than the one usually adopted. The new formulation is successfully tested against the consolidated innovation adoption of two economically impacting technological innovations: digital cameras and mobile phones.

Technological substitution is the hallmark of economic transformation. It is an open-end process that will last for as long as human life in our planet remains sustainable. Schumpeter [1], [2] and [3], back in the 1930's, was one of the pioneers in recognizing this important aspect in economic analysis. In fact, instead of assuming that economic systems are simply adapting to exogenous changes, the essence of the 1874 theory of general equilibrium of Walras [4], Schumpeter proposed a new view, that is, economic systems are to be interpreted as adaptive self-transforming evolutionary systems. In a seminal work, Levins and Lewontin [5] while stressing the concepts of continual change and co-determination between organism and environment, opened up a vivid scholarly discussion about the fact that the ideology of evolutionism had indeed penetrated into both natural and social sciences … (sic) “Although the concept of evolution has become firmly identified with organic evolution, (…) the theory of evolution of life is only a special case of a more general world view that can be characterized as “evolutionism”. The ideology of evolutionism (…) has permeated all the natural and social sciences including anthropology, biology, cosmology, linguistics, sociology and thermodynamics. It is a world view that encompasses the hierarchically related concepts of change, order, direction, progress and perfectability (…). Theories of the evolution of the inorganic world, like cosmology and thermodynamics, generally include only change and order, while biological and sociological theories add the ideas of progress and even perfectability as elaborations of their theoretical structure” (see Ref. 5, page 9). In quite general terms, evolutionary theories essentially account for the rate and direction in which the system changes. The traditional Darwinian mechanism for evolution rests upon three propositions: the principle of variation, meaning that members of a relevant population vary in their characteristics (physiology, morphology and behavior, in biological terms) that convey selective significance; the principle of heredity, implying that the characteristics of individual entities are copied over time (offspring resemble their parents in the average more than they resemble unrelated individuals, in biological terms); and, the principle of selection, meaning that the interaction between the entities in a specific environment results in that some entities are endowed with sets of characteristics that are better suited to their survival in said environment, thereby enhancing the growth of their population. From these three principles, the mechanics of evolution is readily obtained [5]. Provided that offspring resemble their parents more than others, if a particular variant leaves more offspring than another, the percent composition of the population in the next generation will change. In time, the population will be dominated by the surviving variant with the higher reproductive rate, and the species will change progressively. This is the kinematics of an evolutionary process. The dynamics is provided by the struggle for survival. The reason some variants leave more offspring is that they are better able to appropriate resources when supply shortens and to optimally reinvest such resources in producing offspring. This superior efficiency is a manifestation of a higher degree of engineering performance in facing the demands and challenges posed by the environment. As emphasized by Sober [6], survival and growth are characteristics of the entities and consequences of their involvement in a selection process. By combining the first two principles under the label of variation, the traditional evolutionary theory becomes essentially a two-component process involving variation and selection. Levins and Lewontin [5] emphasized this point as the embarrassing aspect of Darwin's theory: “if selection causes the differential reproduction of variants, eventually the species population should uniformly be the fit type among those available at the start. But then there would be no more variants for further evolution. Darwinian evolution by selection among variants is a self-negating process, which consumes the fuel, variation, on which it feeds and so destroys the condition for its further development”. The question of approaching evolutionary economics along these views will be considered in the next section. This paper is organized as follows. In Section 2 methodological considerations in regards to viewing technological substitution and innovation adoption under this approach are made. Section 3 bears on the results from theoretical modeling and corresponding discussions. In particular, in Sub-section 3.1, the problem of technological substitution within the framework of the logistic modeling is dealt with using two specific approaches: the logistic Lotka–Volterra competition model and the conventional, non-interacting, logistic function modeling, while in Sub-section 3.2 the closely related subject of technological adoption is taken up with particular emphasis on the analysis of the takeoff time for that process. Two important evolutionary study cases are covered, namely, digital imaging and the mobile communication. Finally, in Section 4 we present our concluding remarks.