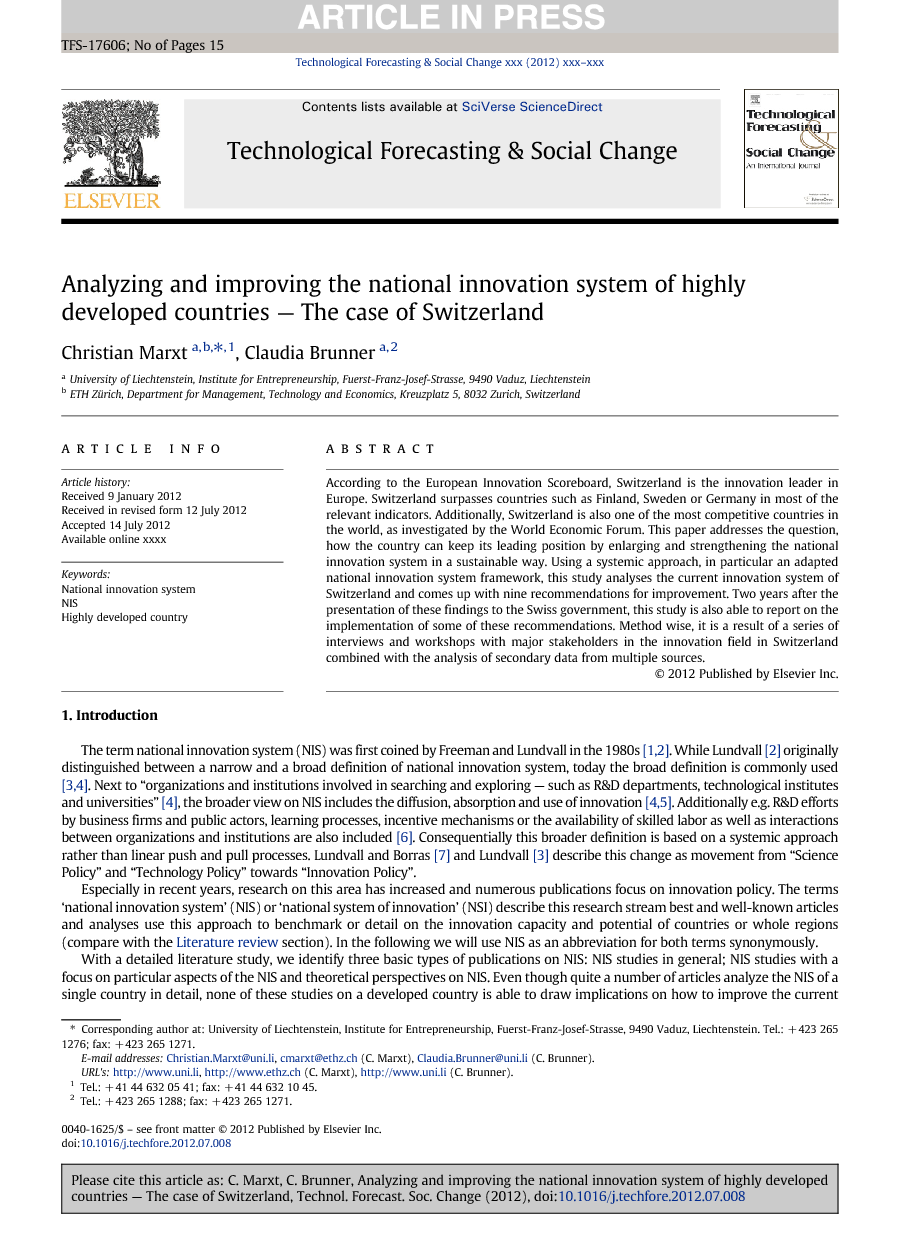 According to the European Innovation Scoreboard, Switzerland is the innovation leader in Europe. Switzerland surpasses countries such as Finland, Sweden or Germany in most of the relevant indicators. Additionally, Switzerland is also one of the most competitive countries in the world, as investigated by the World Economic Forum. This paper addresses the question, how the country can keep its leading position by enlarging and strengthening the national innovation system in a sustainable way. Using a systemic approach, in particular an adapted national innovation system framework, this study analyses the current innovation system of Switzerland and comes up with nine recommendations for improvement. Two years after the presentation of these findings to the Swiss government, this study is also able to report on the implementation of some of these recommendations. Method wise, it is a result of a series of interviews and workshops with major stakeholders in the innovation field in Switzerland combined with the analysis of secondary data from multiple sources.

The term national innovation system (NIS) was first coined by Freeman and Lundvall in the 1980s [1] and [2]. While Lundvall [2] originally distinguished between a narrow and a broad definition of national innovation system, today the broad definition is commonly used [3] and [4]. Next to “organizations and institutions involved in searching and exploring — such as R&D departments, technological institutes and universities” [4], the broader view on NIS includes the diffusion, absorption and use of innovation [4] and [5]. Additionally e.g. R&D efforts by business firms and public actors, learning processes, incentive mechanisms or the availability of skilled labor as well as interactions between organizations and institutions are also included [6]. Consequentially this broader definition is based on a systemic approach rather than linear push and pull processes. Lundvall and Borras [7] and Lundvall [3] describe this change as movement from “Science Policy” and “Technology Policy” towards “Innovation Policy”. Especially in recent years, research on this area has increased and numerous publications focus on innovation policy. The terms ‘national innovation system’ (NIS) or ‘national system of innovation’ (NSI) describe this research stream best and well-known articles and analyses use this approach to benchmark or detail on the innovation capacity and potential of countries or whole regions (compare with the Literature review section). In the following we will use NIS as an abbreviation for both terms synonymously. With a detailed literature study, we identify three basic types of publications on NIS: NIS studies in general; NIS studies with a focus on particular aspects of the NIS and theoretical perspectives on NIS. Even though quite a number of articles analyze the NIS of a single country in detail, none of these studies on a developed country is able to draw implications on how to improve the current system and at the same time report on changes being made, after these recommendations were issued. Hence, this study will go into detail on the very far developed country of Switzerland, using a start-to-end approach. By using a systemic approach, this study is not only able to develop recommendations for improvement for the NIS of one of the world's leading innovators, but also to report on the implementation of several of these recommendations. After a thorough analysis of Switzerland's national innovation system and a number of workshops and discussion sessions, the authors propose nine recommendations on how to enlarge and strengthen the Swiss innovation system in a sustainable way, so the country may keep its leading position or even extend its lead. Methodically, we compiled a literature review and analyzed a large number of secondary data. Based on that we conducted a series of expert interviews, workshops with major stakeholders as well as discussion sessions with a consulting counsel of the government. 1.1. Switzerland Switzerland, also the Swiss Confederation, is a relatively small country in the middle of Europe. It is bordered by Germany in the north, Austria and Liechtenstein in the east, Italy in the south and France in the west. The country was founded in 1848 and enfolds 41.285 km2. The 7.8 Mio inhabitants speak four official languages. Switzerland is a very rich country and achieved a GDP of 69.838$ per capita in 2010 and still has its own currency, the Swiss Franc [8]. The Swiss innovation system ranks among the best in Europe [9], [10], [11] and [12] (compare with Fig. 1). One major source of this excellent position is the outstanding reputation of Switzerland's universities and scientific research facilities (compare with Tables 1 and 2).This reputation is mirrored in a ranking of per capita publications, which is headed by Switzerland [13]. Apart from that, Swiss companies also contribute with a substantial amount of R&D spending to the innovation performance of Switzerland [11] and [14]. Even though Switzerland seemingly succeeds in comparison to other European countries, weak spots can still be identified when having a closer look [11] and [12] (compare with Section 6).

Several interviews and workshops as well as an extensive research in secondary literature allowed analyzing Switzerland's innovation policy. A number of success factors, but also weak points could be identified. In a next step, nine recommendations were developed in a joint approach, on how to improve the current situation further or at least keep the leading position. In a final step, those recommendations were handed over to the Swiss government. Two years later (in 2011/2012), first developments and the implementation of some of the recommendations can be observed. Some insights and discussion points can be drawn from this comprehensive study. First of all, it becomes evident, that it is worth the effort to investigate if there are any possibilities for improvement, even if a country is already a successful innovator. On the other hand, some of the identified success factors may serve as a role model for less developed countries. Although Switzerland is a unique country with unique characteristics, some of the findings can be conveyed to other countries, no matter how far developed. Lessons can be learned from the OECD innovation leader and the findings and recommendations may serve for discussion purposes as well. Switzerland is indeed very special. Next to tourism and agriculture, the country lives solely from its “brains”. Consequentially, Switzerland's government has a focus on education and spends very high amounts of money on this resource. However, the quota of people with tertiary education is still on a mediocre level. Also the overall spending on R&D is very high as well, but in contrast the number of people working in R&D is much lower than in other countries in Europe. It is however unclear, whether this means high productivity or something else. Adding to the latter fact is the low percentage of public spending in contrast to the very high spending from private institutions. Obviously, Switzerland manages to attract large and successful corporations into the country and profits from them. Supporting the notion of Alvarenz/Marin [50] on how to attract companies, Switzerland seems to offer all categories. From low effective taxation, legal security, very good infrastructure up to very high standards of living, everything is available to a high degree. Additionally, the strong regionalism in Switzerland allows for competition between the regions within the country, which again furthers Switzerland's attractiveness. Regions have to try hard to attract companies, before their neighbors do. In some cases, the promotion of innovation activities is even outsourced to a private institution, which takes care of all questions and problems in this area. And finally, the country is the home of extraordinary research facilities and universities, which bring very talented people into the country and in many cases, compensate for the small number of highly qualified Swiss citizens. To sum these results up, distinct lessons can be learned from Switzerland. First of all, optimal surrounding conditions have to be provided to attract foreign companies, which to a great extent are responsible for the country's innovative performance. Also, a balance has to be found between the attraction of foreign companies and the support for local SMEs, which also take a vital part in the country's innovation performance. It furthermore has to ensure, that all companies are enabled and even encouraged to innovate. Coming with that, a competition between the regions to become most attractive to companies, improves the overall attractiveness. Additionally, talents and high-potentials from foreign countries have to be attracted and conditions must be adapted, so that these talents want to stay and can stay for a longer period. Unfortunately, it is unsure, how far these results can be generalized. Depending on the state of development, the geographical location or the history of countries, only small parts, or single recommendations can be generalized. This is even more hindered, since no single success factors of Switzerland could be identified. Only bundles of means and of course their relation to the situation of the country, became apparent. Again, one will have to be careful to generalize findings from this study, and there is the need to adapt the findings to the local situation. An additional factor limiting the study is the unknown long-term effect of the induced policy changes. A follow-up study in 3–5 years will give valuable insights and evaluate, which recommendations really made a change and find details, which changes were successful. Overall, it will be interesting to investigate, what really is a success when changes are implemented in a national innovation system. Can e.g. success be measured in terms of number of patents filed or economic performance, etc.? And finally, it might be very interesting, to investigate, whether a coherent innovation policy in fact is a success factor, or merely “nice-to-have”.