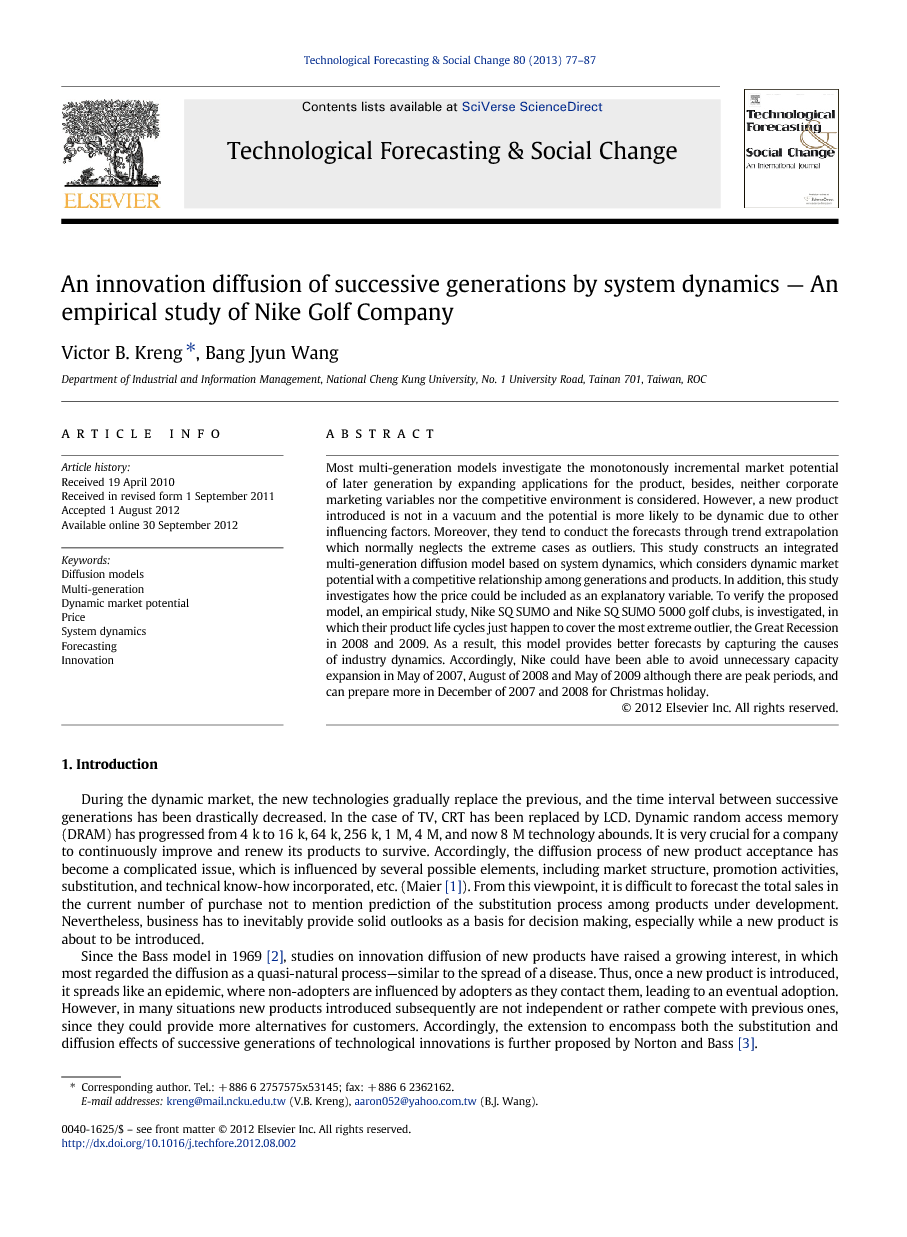 Most multi-generation models investigate the monotonously incremental market potential of later generation by expanding applications for the product, besides, neither corporate marketing variables nor the competitive environment is considered. However, a new product introduced is not in a vacuum and the potential is more likely to be dynamic due to other influencing factors. Moreover, they tend to conduct the forecasts through trend extrapolation which normally neglects the extreme cases as outliers. This study constructs an integrated multi-generation diffusion model based on system dynamics, which considers dynamic market potential with a competitive relationship among generations and products. In addition, this study investigates how the price could be included as an explanatory variable. To verify the proposed model, an empirical study, Nike SQ SUMO and Nike SQ SUMO 5000 golf clubs, is investigated, in which their product life cycles just happen to cover the most extreme outlier, the Great Recession in 2008 and 2009. As a result, this model provides better forecasts by capturing the causes of industry dynamics. Accordingly, Nike could have been able to avoid unnecessary capacity expansion in May of 2007, August of 2008 and May of 2009 although there are peak periods, and can prepare more in December of 2007 and 2008 for Christmas holiday.

During the dynamic market, the new technologies gradually replace the previous, and the time interval between successive generations has been drastically decreased. In the case of TV, CRT has been replaced by LCD. Dynamic random access memory (DRAM) has progressed from 4 k to 16 k, 64 k, 256 k, 1 M, 4 M, and now 8 M technology abounds. It is very crucial for a company to continuously improve and renew its products to survive. Accordingly, the diffusion process of new product acceptance has become a complicated issue, which is influenced by several possible elements, including market structure, promotion activities, substitution, and technical know-how incorporated, etc. (Maier [1]). From this viewpoint, it is difficult to forecast the total sales in the current number of purchase not to mention prediction of the substitution process among products under development. Nevertheless, business has to inevitably provide solid outlooks as a basis for decision making, especially while a new product is about to be introduced. Since the Bass model in 1969 [2], studies on innovation diffusion of new products have raised a growing interest, in which most regarded the diffusion as a quasi-natural process—similar to the spread of a disease. Thus, once a new product is introduced, it spreads like an epidemic, where non-adopters are influenced by adopters as they contact them, leading to an eventual adoption. However, in many situations new products introduced subsequently are not independent or rather compete with previous ones, since they could provide more alternatives for customers. Accordingly, the extension to encompass both the substitution and diffusion effects of successive generations of technological innovations is further proposed by Norton and Bass [3]. Dynamic market when competitive pressures are present leads to several key challenges: nonstationarity, changes in parameters over time, and cross-sectional heterogeneity (Heerde, Mela, and Manchanda [4]). Therefore, more marketing variables, which include price, advertising, distribution, product relationships, etc., have been included to enhance the multi-generation diffusion models. Among these marketing-mix variables, price has received a great deal of attention because of its critical role in influencing the demand for a product. The incorporation of price seems necessary, in some cases, particularly where the lower price would lead to a significant increase of growth rate for sales, and it could also capture the competitive relationship across generations. However, the previous models assume that new generations will completely replace their predecessors and the market potential of them must increase by expanding applications for the product, which is not necessarily happening in all cases due to the influences from factors such as the growth or decline of market, the competition of other products, the relative technical capability of a product, etc. There certainly exists the case for Microsoft Windows: consumers perceive Windows 7 to have less utility than Window XP, so that Windows 7 may never completely replace Window XP. The shortcoming of the traditional models is to ignore the complexity and competition underlying the process of diffusion. Hence, these models solely concentrated on one, or a combination of some, of the relevant decision variables, and do not offer a comprehensive framework on the product growth. In addition, although a large extent innovation diffusion models can be very useful to enhance the understanding of innovation dynamics, their use can only be limited to the companies in monopolistic markets and explicitly excluding competition, or they can only serve as an aggregated model for a whole sector. However, existing or potential competitors or the risk resulting from substitutive products have a tremendous impact on managerial decision-making. Moreover, most traditional models based on statistical techniques forecast the sales volume during the product life cycle by using trend extrapolation and regression analysis, which withdraw most extreme cases as outliers. Accordingly, the interest of this study concentrates on extending the fundamental multi-generation diffusion model and also relaxing the assumption of the monotonously incremental market potential of later generation to construct an integrated model based on system dynamics in a competitive environment which incorporate price explicitly. The use of the system dynamics approach allows the development of more complex model to investigate the structures and to further focus the processes of innovation diffusion. So that, this model can enhance insight in the essence of the problems, and explicitly describes how price competition across successive generations as well as among different products. There are two objectives in this study, which are: (1) to develop an enhanced model to successive generations of innovation diffusion to explicitly capture the impact of price and to provide more reliable forecasts, and (2) to adopt this framework as simulation instruments for the determination of reasonable scenarios for decisions and policies. In addition, an empirical study from the two successive generations of Nike golf clubs, Nike SQ Sumo and SQ Sumo 5000, are investigated in which the time frame is just about to cover the most extreme outlier in the last 70 years, the Great Recession in 2008 and 2009, for demonstration. The proposed model complies with observed phenomena to provide the empirical findings.

In order to provide better forecasts during the product life cycle with particularly the competition and substitution effects between successive generations occurred, this study constructs an innovation diffusion model for multi-generation products based on system dynamics, which considers dynamic market potential with fluctuation due to competitive relationship among generations and products. In addition, this study investigates how the product price could be included as an explanatory variable in this dynamic model. Besides, a holistic overview can be achieved to obtain benefits for the innovation diffusion of new product acceptance. To sum up, this system dynamics model is able to accurately forecast the cyclical peaks and the subsequent downturns by investigating the structures and forces driving the processes of innovation diffusion. The illustrations of Nike golf clubs, Nike SQ SUMO and Nike SQ SUMO 5000, are presented, in which their product life cycle just happens to cover the most extreme outlier, the Great Recession in 2008 and 2009, is examined. The results reveal that this system dynamics model provides reliable and accurate forecasts by capturing the causes of industry dynamics. Second, this proposed model also can provide significant insights towards the complexity of business structure and the dynamic relationship caused by all the relevant influencing factors through feedback loops from non-linear behaviors. It can provide a means of understanding the causes from industry behavior, for example, while the economic growth rate turns down, the sales will begin to decrease. In addition, the sales quantity is also influenced by the business cycle and price, where special discount for Christmas holiday and the beginning of the four most prestigious annual tournaments of golf make drastic volume increase. The purpose of such forecasts is to foster improved, early understanding of changes in the environment, as a guide to construct adaptive strategies. Third, this model can be extended toward a simulator to analyze the consequences with different exogenous inputs. Since only the impact from price change can determine the overall pricing strategy. In addition, this study reveals the evidence of an important interaction in price response across generations. A later generation introduced into the market too late or with higher price might cause a sharp decline in sales. Nevertheless, most single-generation models are not able to account for these intergenerational interdependencies might overlook such important component of the price impact over time. For future research, optimal phasing out of previous generations and optimal timing of the entry of later ones have to be investigated. Accordingly, it can also incorporate additional influencing marketing-mix variables or brand choice modeling. Ultimately, most of the studies in diffusion models seem to perform well in describing and explaining the spread only for a specific sector, however, they have not been tested on others. Lyneis [27] indicated that market models are less threatening and more standard procedure than company model. Here, an empirical case of Nike golf clubs is used to demonstrate that this model can be deployed to an application in company level instead of only associated with industries or market.