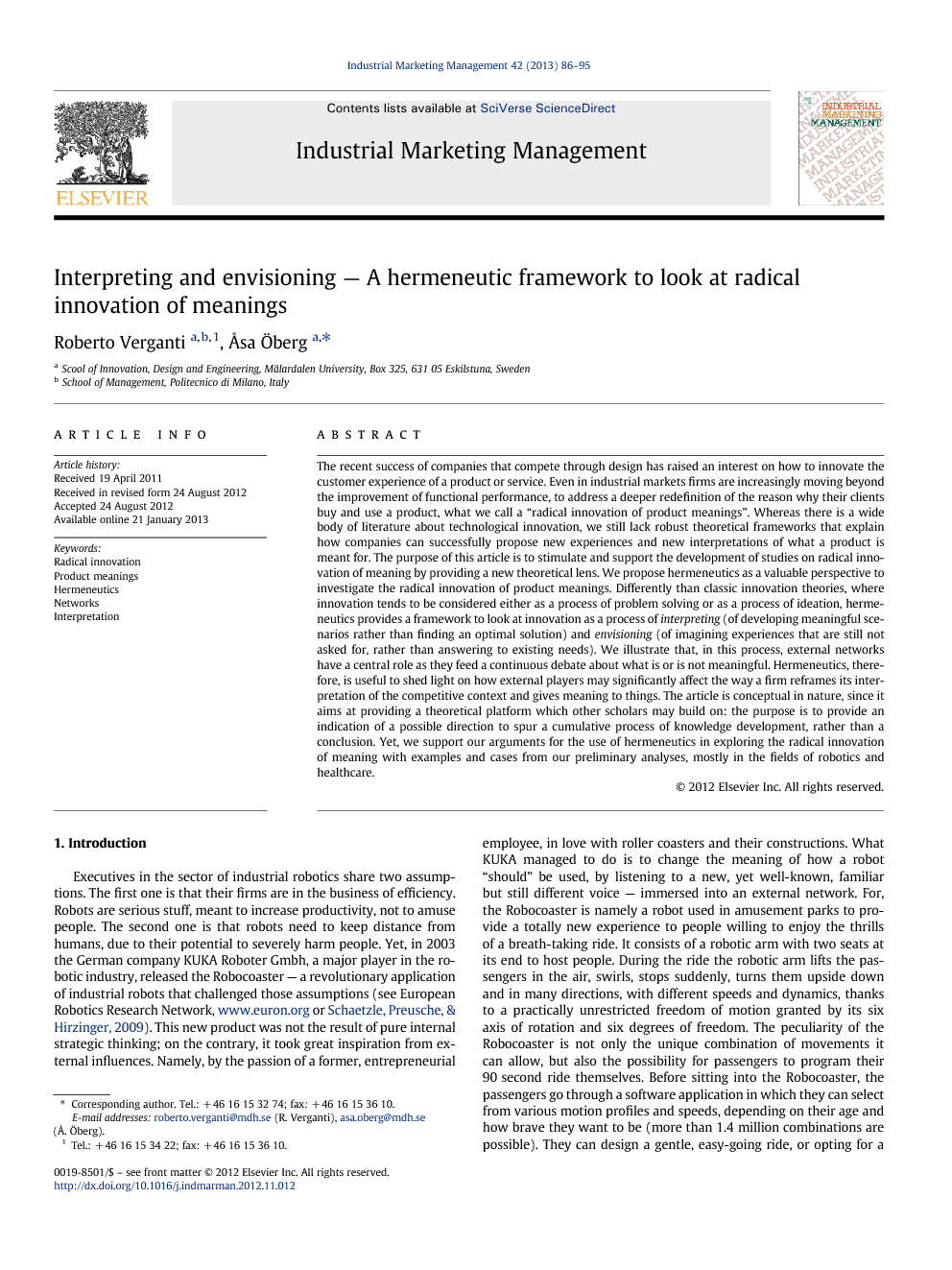 The recent success of companies that compete through design has raised an interest on how to innovate the customer experience of a product or service. Even in industrial markets firms are increasingly moving beyond the improvement of functional performance, to address a deeper redefinition of the reason why their clients buy and use a product, what we call a “radical innovation of product meanings”. Whereas there is a wide body of literature about technological innovation, we still lack robust theoretical frameworks that explain how companies can successfully propose new experiences and new interpretations of what a product is meant for. The purpose of this article is to stimulate and support the development of studies on radical innovation of meaning by providing a new theoretical lens. We propose hermeneutics as a valuable perspective to investigate the radical innovation of product meanings. Differently than classic innovation theories, where innovation tends to be considered either as a process of problem solving or as a process of ideation, hermeneutics provides a framework to look at innovation as a process of interpreting (of developing meaningful scenarios rather than finding an optimal solution) and envisioning (of imagining experiences that are still not asked for, rather than answering to existing needs). We illustrate that, in this process, external networks have a central role as they feed a continuous debate about what is or is not meaningful. Hermeneutics, therefore, is useful to shed light on how external players may significantly affect the way a firm reframes its interpretation of the competitive context and gives meaning to things. The article is conceptual in nature, since it aims at providing a theoretical platform which other scholars may build on: the purpose is to provide an indication of a possible direction to spur a cumulative process of knowledge development, rather than a conclusion. Yet, we support our arguments for the use of hermeneutics in exploring the radical innovation of meaning with examples and cases from our preliminary analyses, mostly in the fields of robotics and healthcare.

As technological opportunities and ideas become widely accessible, a major challenge for companies is how to make sense of this wealth of opportunities. Innovation therefore increasingly concerns not only the improvement of a given performance, but also a redefinition of what is relevant and meaningful for customers. One example is the German company KUKA and their roller coaster application, in which they have used existing technology to transform robots from powerful and reliable machines into surprisingly fun and unpredictable entertainment devices. Another example is Philips Healthcare who changed the assumptions of what a good CT scanner at hospitals is meant for, from a high quality image device to a system of Ambient Experience. By describing and analyzing these and other cases we have shed some light on how companies may successfully manage the radical innovation of product meanings. The conclusions from our understanding have generated a theoretical framework to explore why certain companies manage to challenge dominant assumptions and seize opportunities (beyond the scope of what currently make sense) in the search for new meanings. By presenting four characteristics we have shown that the nature of radical innovation of meanings does not totally fit with the perspective of dominant innovation theories. We put forward that meanings are context dependent and cannot be optimized. And when they are radically new, they are outlandish to dominant assumptions in an industry and have to be co-generated through a design action. This peculiar nature is not satisfactorily matched by theoretical frameworks that assume that innovation comes from a process of problem solving in the search of an optimal solution, or that consider innovation as a process of ideation. Neither can this type of innovation be explained in its entirety by taking a pure constructionist, and less interpretative, approach. By leveraging the theoretical framework of hermeneutics, we have proposed an alternative perspective to explore the radical innovation of meaning: by looking at innovation as a process of interpreting and envisioning. The first implication (in our framework related to the role of innovation) is that when it comes to the radical innovation of product meanings the crucial element of the innovation process is not product development, nor idea generation but the process of vision creation. In other words, the center of attention should not be on implementation nor on creativity, but on strategy. As a consequence, the key role therefore, is played not by scientists or creative employees — but by the top management. The leaders, together with a team of both internal and external interpreters, need to co-create proposals of new meanings in parallel to the strategic work of vision creation. Innovation of meaning does not come from users, but from interpretation. Therefore, leaders have to be a part of that process, as meanings are context dependent, iterated and quite often can look outlandish. If leaders are excluded, meanings become very hard to communicate. This insight invites to further explore what is the role of leaders in continuously redefining the framework of interpretation that is used to make sense of opportunities. The second implication (related to the role of networks) is that in this act of redefining the framework of interpretation of a firm, external actors, especially those “outside of usual networks” in the industry, play a major role. They bring a critical stance to what is currently assumed to be meaningful by a company and add new perspectives in the search for new, profitable, meanings. The radical innovation of product meanings therefore requires to see external partners not only as providers of knowledge and solutions, but also and especially, as providers of arguments and novel interpretations, in a continuous iterative dialogue. This article is a first step, a suggestion for a direction of investigation. The aim has been to propose a framework, a lens for further research. On our side, the next step will be to feed this conceptual elaboration with new empirical analysis, using as an empirical ground the industry of industrial robotics and other high-tech industries. This article therefore has not a definitive conclusion. Rather we hope to open up for a debate, inspired by the hermeneutic tradition. We hope to hear many new, critical and different voices and learn to see other, complimentary pictures on the fascinating as well as fairly unexplored issue of radical innovation of meaning.