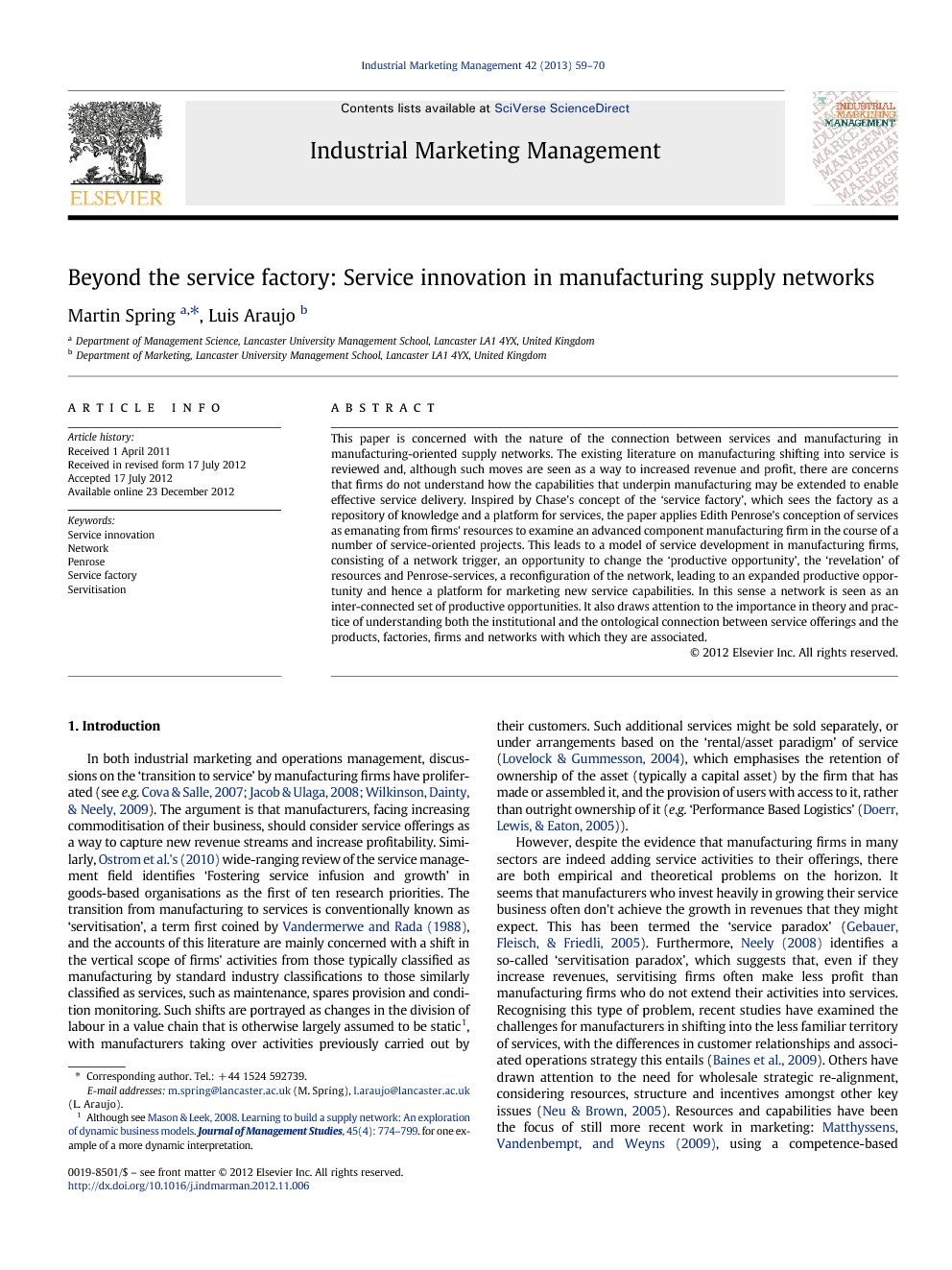 This paper is concerned with the nature of the connection between services and manufacturing in manufacturing-oriented supply networks. The existing literature on manufacturing shifting into service is reviewed and, although such moves are seen as a way to increased revenue and profit, there are concerns that firms do not understand how the capabilities that underpin manufacturing may be extended to enable effective service delivery. Inspired by Chase's concept of the ‘service factory’, which sees the factory as a repository of knowledge and a platform for services, the paper applies Edith Penrose's conception of services as emanating from firms' resources to examine an advanced component manufacturing firm in the course of a number of service-oriented projects. This leads to a model of service development in manufacturing firms, consisting of a network trigger, an opportunity to change the ‘productive opportunity’, the ‘revelation’ of resources and Penrose-services, a reconfiguration of the network, leading to an expanded productive opportunity and hence a platform for marketing new service capabilities. In this sense a network is seen as an inter-connected set of productive opportunities. It also draws attention to the importance in theory and practice of understanding both the institutional and the ontological connection between service offerings and the products, factories, firms and networks with which they are associated.

In both industrial marketing and operations management, discussions on the ‘transition to service’ by manufacturing firms have proliferated (see e.g. Cova and Salle, 2007, Jacob and Ulaga, 2008 and Wilkinson et al., 2009). The argument is that manufacturers, facing increasing commoditisation of their business, should consider service offerings as a way to capture new revenue streams and increase profitability. Similarly, Ostrom et al.'s (2010) wide-ranging review of the service management field identifies ‘Fostering service infusion and growth’ in goods-based organisations as the first of ten research priorities. The transition from manufacturing to services is conventionally known as ‘servitisation’, a term first coined by Vandermerwe and Rada (1988), and the accounts of this literature are mainly concerned with a shift in the vertical scope of firms' activities from those typically classified as manufacturing by standard industry classifications to those similarly classified as services, such as maintenance, spares provision and condition monitoring. Such shifts are portrayed as changes in the division of labour in a value chain that is otherwise largely assumed to be static1, with manufacturers taking over activities previously carried out by their customers. Such additional services might be sold separately, or under arrangements based on the ‘rental/asset paradigm’ of service (Lovelock & Gummesson, 2004), which emphasises the retention of ownership of the asset (typically a capital asset) by the firm that has made or assembled it, and the provision of users with access to it, rather than outright ownership of it (e.g. ‘Performance Based Logistics’ (Doerr, Lewis, & Eaton, 2005)). However, despite the evidence that manufacturing firms in many sectors are indeed adding service activities to their offerings, there are both empirical and theoretical problems on the horizon. It seems that manufacturers who invest heavily in growing their service business often don't achieve the growth in revenues that they might expect. This has been termed the ‘service paradox’ (Gebauer, Fleisch, & Friedli, 2005). Furthermore, Neely (2008) identifies a so-called ‘servitisation paradox’, which suggests that, even if they increase revenues, servitising firms often make less profit than manufacturing firms who do not extend their activities into services. Recognising this type of problem, recent studies have examined the challenges for manufacturers in shifting into the less familiar territory of services, with the differences in customer relationships and associated operations strategy this entails (Baines et al., 2009). Others have drawn attention to the need for wholesale strategic re-alignment, considering resources, structure and incentives amongst other key issues (Neu & Brown, 2005). Resources and capabilities have been the focus of still more recent work in marketing: Matthyssens, Vandenbempt, and Weyns (2009), using a competence-based marketing perspective, identify a broad range of capabilities required for the transitioning to service; and Ulaga and Reinartz (2011) similarly identify categories of resources and capabilities that must underpin the transition to service. In this paper, we complement these recent studies in two ways. First, whilst also taking a broadly capabilities-based view, we dwell less on categories and typologies of apparently novel or additional capabilities, and more on the very nature of the connection between manufacturing and service capabilities. In doing this, we are inspired by Chase's concept of the ‘service factory’ (Chase & Garvin, 1989), and Pavitt's reflection on high-value manufacturing and its relationship to services (Pavitt, 2003). The ‘service factoryʼ concept was proposed over twenty years ago, with Chase and Erikson (1988) and Chase and Garvin (1989) proposing that factories should be seen as repositories of specialist knowledge, providing a range of service benefits to both external customers and internal customers, especially marketing. Arguing that ‘The service tasks of the business can no longer be separated neatly and sequentially from the work of the factory’ (Chase & Garvin, 1989: 69), they propose four possible services factory roles — laboratory, consultant, showroom and dispatcher. In short, factories should be seen as service platforms rather than as sites insulated from the rest of the company. Pavitt (2003) pursues a similar theme, arguing that manufacturing in advanced economies is surrounded by intimately linked, high-skill activities, the ‘…skilled activities that manufacturing firms undertake except manufacturing itself’ (Pavitt, 2003: 88), adding perceptively that ‘…the fact that most of these activities are defined as “services” often confuses rather than clarifies’ (Pavitt, 2003: 88). The second way in which we complement the existing research is by linking this close examination of the factory or firm's manufacturing capabilities to the network in which the firm operates. In particular, we capture and characterise how services are provided in a process of frequent network reconfiguration, rather than as a process of simply ‘moving downstream’ in a largely fixed collection and sequence of activities in a static value-chain. To achieve this we draw on key concepts from the work of Penrose (1959), especially her notion of the firm's ‘productive opportunity’, and apply them to an in-depth study of a high-tech component manufacturing firm as it explores the ‘shift to service’. Our rather fine-grained study shows some of the dynamic detail of what could be characterised ‘from afar’ (Van de Ven, 2007) as a more straightforward ‘transition’: in revealing some of this detail, we may be able to partly explain some of the difficulties experienced by manufacturing firms shifting into service. Our analysis results in a network-oriented process model of how network reconfiguration and resource use can allow the revelation of service opportunities inherent in manufacturing capabilities. The paper is structured as follows. After a focussed account of the literature on the shift to services in the next section, we then discuss alternative theoretical perspectives related to capabilities, arguing for an approach based on Penrose. Then, we summarise the method we used to study our single, focal firm, and present data on three exemplar projects. In the analysis and discussion sections that follow, we propose a model for the development of services that are rooted in manufacturing resources, and then explore how these services relate to products, the factory, the firm, and the network. The final section concludes and suggests further work.

8.1. Conclusions Our close examination of the relationship between products, production processes and the services surrounding them and connected to them allows us to build on the work of Mathieu, allowing a finer-grained analysis of the ‘service specificity’ dimension of her framework for service maneuvers (Mathieu, 2001). Our approach also adds a complementary perspective to that of Matthyssens and Vandenbempt (2008): whereas their manufacturers looked to technical and business process integration (always including and based on products) as the added service element, Ariel was digging deeper into their Penrose-services with a view to selling these in their own right, possibly without the products as such. In other words, there are multiple dimensions along which manufacturing firms might ‘shift to service’, and multiple logics as to which service offerings build most readily on existing and readily accessible resources. In this sense we also agree with Matthyssens and Vandenbempt's emphasis on the need for entrepreneurship (2008: 326), which we have examined specifically in terms of the productive opportunity. Above all, rather than framing the ‘transition’ to service as an unfortunate but necessary phase before manufacturing firms achieve ‘service infusion’, we have stressed the continuously emergent and exploratory nature of the shift to service. The restless firm – in conjunction with its restless network counterparts – is engaged in network reconfiguration rather than simply ‘moving downstream’. We have delineated at least some of the main features of that process. Furthermore, our analysis has allowed a preliminary understanding of the relationship between the service offering on one hand, and the products, factories, firms and networks with which it is associated on the other. Hence we begin to build a notion of the manufacturing-service firm and the manufacturing-service network, as well as revealing more of the characteristics of the service (manu)factory. And in doing so, we identify some of the ways in which the service factory, and the resources underpinning it, can be used to develop a more proactive marketing approach. 8.2. Limitations and suggestion for further work We hope that this close consideration of the roots of some product-related services has shed new light on some of the challenges faced in the ‘shift to service’. However, we are also aware that there are a number of limitations in our work, and several opportunities for it to be developed further. Empirically, the instances of service development we studied had all been brought to fruition. It would be revealing also to examine instances of attempts to develop service-intensive offerings that had been rejected or that had not been successful, in order to identify some of the fault-lines and limitations to the ‘productive opportunity’. Also, as discussed, we chose to begin with services that seemed most closely related to the resources implicated in production processes. A development of this study would be to examine closely, in another more appropriate setting, the connections between resources, ‘Penrose-services’ and service products seemingly further removed from production, such as commissioning, equipment operation and maintenance. Finally, our data collection was limited to the focal firm, Ariel. A fuller picture of the projects, especially the notion of ‘chains of productive opportunities’, could perhaps have been achieved if we had been able to negotiate access to some of the OEMs and the various suppliers involved. Theoretically, our use of Penrose foregrounds the dynamic phase of service ‘in the making’. A complementary view, based more in capabilities-as-routines (Winter, 2003), would illuminate the subsequent stabilisation of services as more regular offerings. Another extension beyond our analysis might be to develop interlinked diagrams of the form of Fig. 1, Fig. 3 and Fig. 4 for network counterparts: this would allow exploration of how one firm's products and service-products become resources for another firm, and how the productive opportunities of firms connect to one another. This is graphically and conceptually complicated. There is also much more to be done in understanding the ontology of ‘manufacturing itself’. We have pursued an approach which still, to some extent, black-boxes resources and focuses on what they can do: complementary perspectives can be derived from studying more fundamentally what technological resources are, for example using Heideggerian notions of tools (Harman, 2010), and how they are socially constructed (Bijker, 2010) and implicated in organisational practices (Nicolini, 2010). Strangely, then, it seems that one route to a fuller understanding of services of this type is a still closer look at the products and production processes to which they are supposedly related.