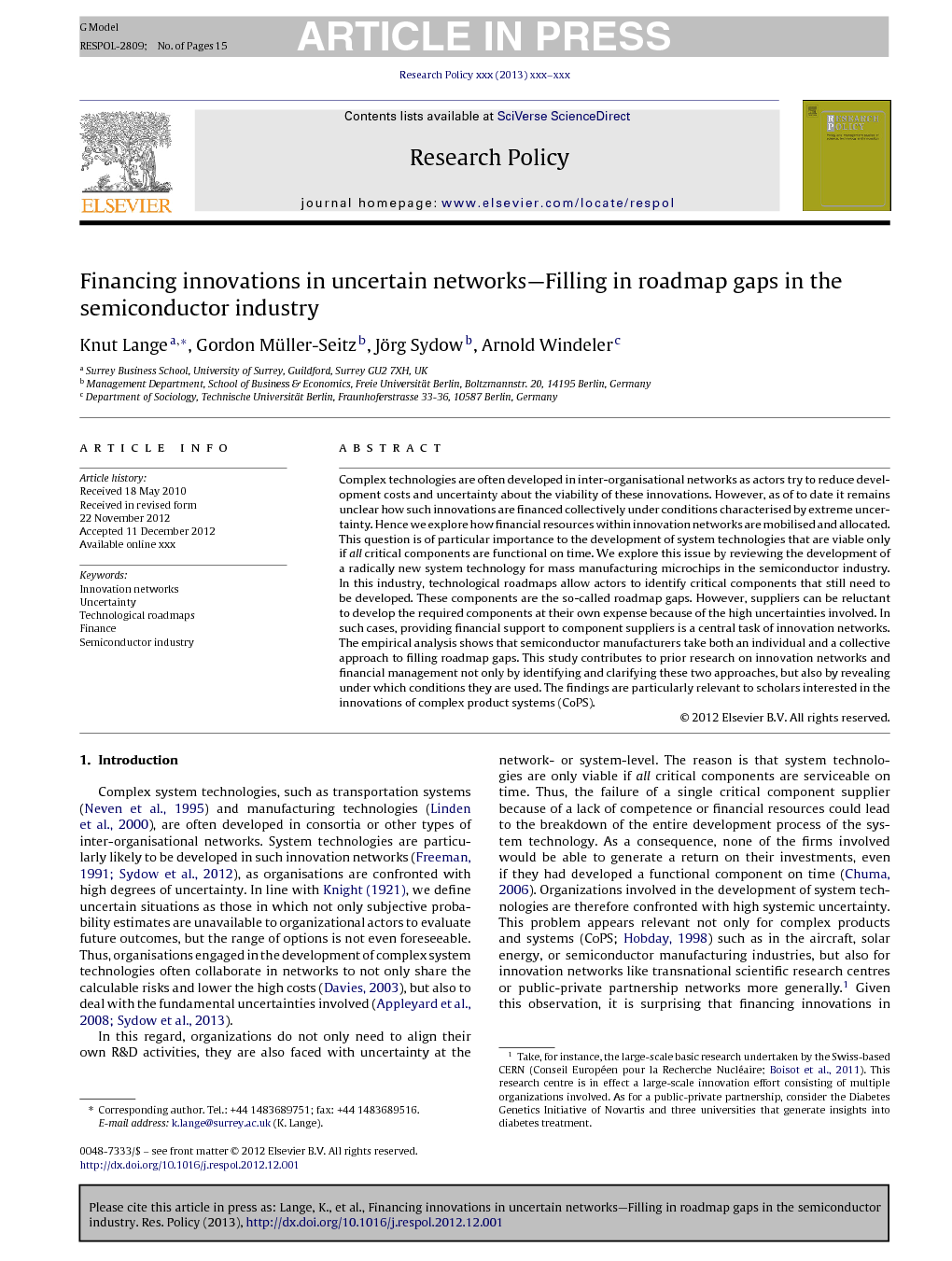 Complex technologies are often developed in inter-organisational networks as actors try to reduce development costs and uncertainty about the viability of these innovations. However, as of to date it remains unclear how such innovations are financed collectively under conditions characterised by extreme uncertainty. Hence we explore how financial resources within innovation networks are mobilised and allocated. This question is of particular importance to the development of system technologies that are viable only if all critical components are functional on time. We explore this issue by reviewing the development of a radically new system technology for mass manufacturing microchips in the semiconductor industry. In this industry, technological roadmaps allow actors to identify critical components that still need to be developed. These components are the so-called roadmap gaps. However, suppliers can be reluctant to develop the required components at their own expense because of the high uncertainties involved. In such cases, providing financial support to component suppliers is a central task of innovation networks. The empirical analysis shows that semiconductor manufacturers take both an individual and a collective approach to filling roadmap gaps. This study contributes to prior research on innovation networks and financial management not only by identifying and clarifying these two approaches, but also by revealing under which conditions they are used. The findings are particularly relevant to scholars interested in the innovations of complex product systems (CoPS).

Complex system technologies, such as transportation systems (Neven et al., 1995) and manufacturing technologies (Linden et al., 2000), are often developed in consortia or other types of inter-organisational networks. System technologies are particularly likely to be developed in such innovation networks (Freeman, 1991 and Sydow et al., 2012), as organisations are confronted with high degrees of uncertainty. In line with Knight (1921), we define uncertain situations as those in which not only subjective probability estimates are unavailable to organizational actors to evaluate future outcomes, but the range of options is not even foreseeable. Thus, organisations engaged in the development of complex system technologies often collaborate in networks to not only share the calculable risks and lower the high costs (Davies, 2003), but also to deal with the fundamental uncertainties involved (Appleyard et al., 2008 and Sydow et al., 2013). In this regard, organizations do not only need to align their own R&D activities, they are also faced with uncertainty at the network- or system-level. The reason is that system technologies are only viable if all critical components are serviceable on time. Thus, the failure of a single critical component supplier because of a lack of competence or financial resources could lead to the breakdown of the entire development process of the system technology. As a consequence, none of the firms involved would be able to generate a return on their investments, even if they had developed a functional component on time (Chuma, 2006). Organizations involved in the development of system technologies are therefore confronted with high systemic uncertainty. This problem appears relevant not only for complex products and systems (CoPS; Hobday, 1998) such as in the aircraft, solar energy, or semiconductor manufacturing industries, but also for innovation networks like transnational scientific research centres or public-private partnership networks more generally.1 Given this observation, it is surprising that financing innovations in networks–and here in particular the development of complex technological innovations–confronted by a high degree of systemic uncertainty has received hardly attention in the extant research. In prior network research, the financial dimension has not usually been considered. In the finance literature, the collective nature of financing problems is neglected. Thus, in this study, we ask the following two explorative research questions: How is the development of complex system technologies, usually faced with extreme uncertainties, financed in networks? Moreover, under what conditions do lead firms contribute to financing and when are more collective approaches more likely? We answer these research questions by examining the results of a longitudinal explorative study on the quest for a radically new system technology for mass manufacturing microchips called Extreme Ultraviolet Lithography or EUVL. In the semiconductor industry, technological roadmaps allow actors to identify critical components that still need to be developed. These components are the so-called roadmap gaps. The existence of roadmap gaps creates high systemic uncertainty for the entire innovation network, especially if it is unclear which organizations are potentially able and willing to fill these gaps. We show that there are basically two ways to address this systemic uncertainty. First, collective action supported by research consortia or government-funded R&D programmes can be organised (in our case by means of collective roadmap gap financing). Second, a lead firm can emerge and absorb the systemic uncertainty by co-funding the projects of critical suppliers (in our case by means of individual roadmap gap financing). Herein we contribute to research by theorizing financing in innovation networks under extreme uncertainty in two ways. First, we identify the mechanisms that the organisations within a network employ to finance roadmap gaps and, thereby, deal with systemic uncertainties. Second, we analyse which mechanisms are used under what conditions. Our findings are summarised in a series of propositions that provide promising avenues for future research on roadmap gap filling in particular and, at least to a limited extent, for financing the development of complex technologies in innovation networks in general. The remainder of this paper starts with a review of the literature on networks and on financial management relevant to our research question. Subsequently, we describe our research setting, the semiconductor manufacturing industry, which allows us to analyse the financing of system technology development in great detail because of the dominance of inter-organisational networks, the high capital intensity of this industry and the extreme systemic uncertainties involved. In the method section, we introduce our explorative in-depth case study approach. In the empirical part, we first describe the systemic uncertainty that organisations face in the development of EUVL before we outline the two ways to address systemic uncertainties: collective and individual financing of roadmap gaps. Based on our findings, we discuss our results and their generalizability in the light of the literature on CoPS and develop propositions. Finally, we summarise our main contributions, discuss the limitations of our study and point to future research avenues.

This paper started with the observation that the financing of innovations in inter-organisational networks in connection with critical suppliers has been neglected by the finance and the management literatures, although this issue is likely to be relevant to the development of complex system technologies in which the level of uncertainty is extremely high, but also to innovation networks more generally. While the management literature in general and network research in particular has thus far ignored the importance of the financial dimension of innovation by and large (O'Sullivan, 2005), the finance literature does not pay much attention to the inter-organisational dimension of the problem. To fill the resulting research gap in the future, we suggest – based on our literature review and our explorative study of the semiconductor manufacturing industry – that both an individual and a collective approach to financing ‘uncertain networks’ in the form of filling roadmap gaps can be relevant. Herein we contribute to prior research on innovation networks and financial management not only by identifying and clarifying these two approaches, but also by revealing under what conditions they are used. Our study has several limitations. First, this case study only focused on a single lithography technology (EUVL), which limits its generalizability. Second, our knowledge about many funding decisions regarding EUVL roadmaps is limited, not least because this is a very sensitive area from the perspective of firms. Third, we analysed only one area of the SEMATECH industry roadmap – lithography – and did not analyse other roadmap areas, such as front-end process technologies. Fourth, the industry context is extreme in some respects (e.g. its capital-intensive and highly uncertain nature), making generalizations additionally difficult. The highly specialised supplier base and the existence of established co-financing mechanisms by consortia are further peculiarities to this industry, also limiting the external validity of the study. However, we have shown that roadmap gaps have also to be dealt with in the case of other lithography technologies, such as immersion lithography, and for other gaps in the SEMATECH roadmap, such as front-end technologies (also in the form of funding competing technological concepts). We even argue that our findings are at least partially generalizable beyond this particular industry context for at least four reasons. First, other pre-competitive and basic research and development consortia also share development costs and face technological uncertainty (e.g. CERN or the Diabetics Genetics Initiative). Second, roadmapping is conducted in other industries as well and seems to be gaining in importance (Phaal, 2011).Third, other industries are also likely to consolidate in a similar fashion to the semiconductor industry, where the number of key manufacturers and suppliers has declined over the past two decades due to financial and competitive pressures (Deans et al., 2003). Fourth, CoPS industries such as the aero-engine/aviation and the photovoltaic industry have important commonalities with the semiconductor industry. For these very reasons, the solar and automotive industries, among others, are orienting themselves on SEMATECH as a role model. This study can only be regarded as a first step towards a theory on the financing of innovations in inter-organisational networks facing extreme uncertainty. One fruitful avenue could be to focus on other CoPS industries, e.g. satellite systems or rail transit systems, to evaluate whether the forms of networked financing described in this case also play a role in these industries. If so, researchers should explore the extent to which the propositions formulated in this study can be confirmed. In this respect, researchers could also analyse whether a combination of collective and individual gap financing is the norm or the exception in industries in which suppliers critical to the development of system technologies are financially supported. Finally, explicit theories might be worth employing to refine our observations. In any case, it appears beneficial to research further into networked financing in order to generate additional insights for research policy, managerial practice and theorizing, making us better able to deal with this timely and relevant phenomenon.