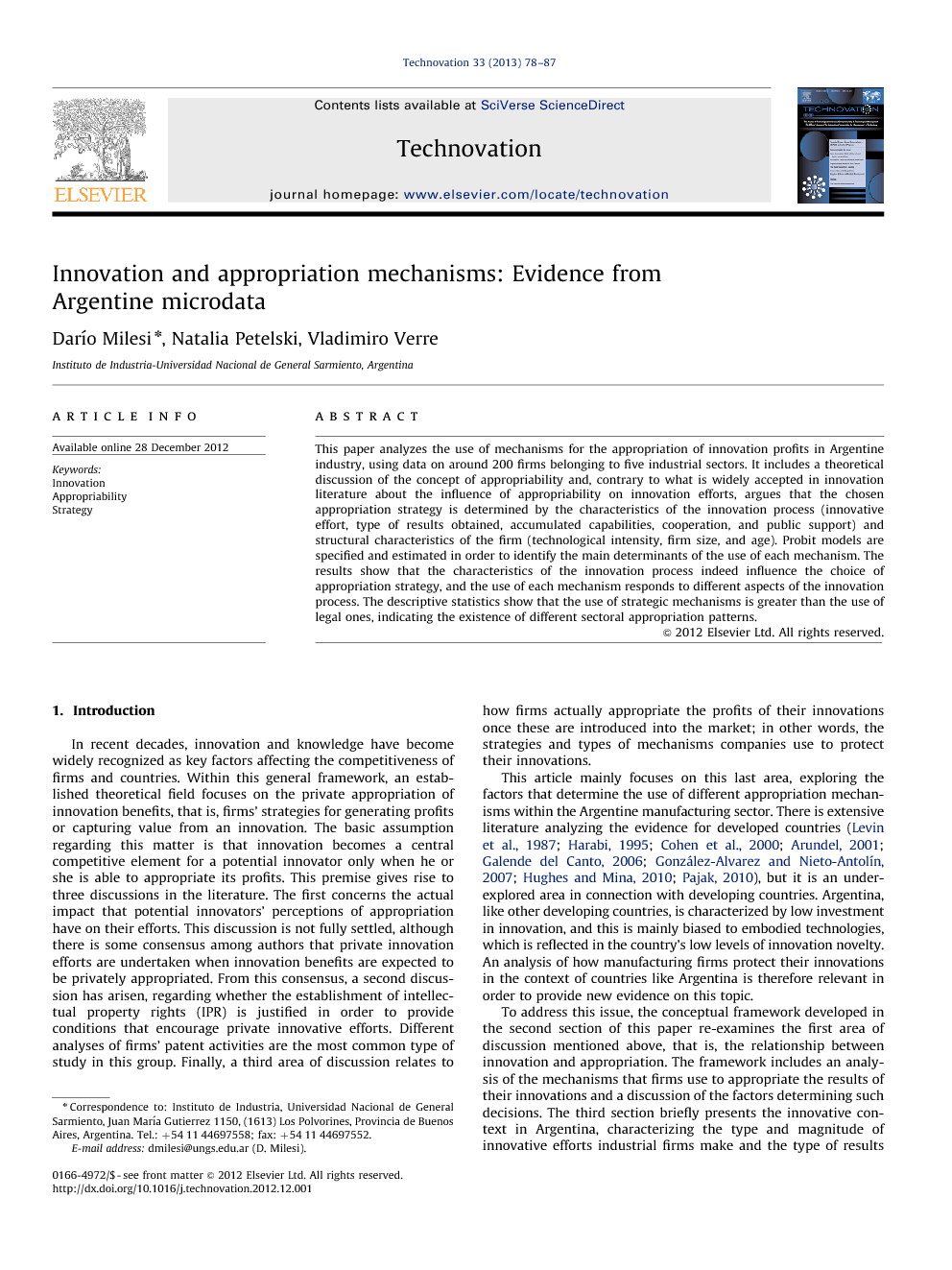 In recent decades, innovation and knowledge have become widely recognized as key factors affecting the competitiveness of firms and countries. Within this general framework, an established theoretical field focuses on the private appropriation of innovation benefits, that is, firms’ strategies for generating profits or capturing value from an innovation. The basic assumption regarding this matter is that innovation becomes a central competitive element for a potential innovator only when he or she is able to appropriate its profits. This premise gives rise to three discussions in the literature. The first concerns the actual impact that potential innovators’ perceptions of appropriation have on their efforts. This discussion is not fully settled, although there is some consensus among authors that private innovation efforts are undertaken when innovation benefits are expected to be privately appropriated. From this consensus, a second discussion has arisen, regarding whether the establishment of intellectual property rights (IPR) is justified in order to provide conditions that encourage private innovative efforts. Different analyses of firms’ patent activities are the most common type of study in this group. Finally, a third area of discussion relates to how firms actually appropriate the profits of their innovations once these are introduced into the market; in other words, the strategies and types of mechanisms companies use to protect their innovations. This article mainly focuses on this last area, exploring the factors that determine the use of different appropriation mechanisms within the Argentine manufacturing sector. There is extensive literature analyzing the evidence for developed countries (Levin et al., 1987, Harabi, 1995, Cohen et al., 2000, Arundel, 2001, Galende del Canto, 2006, González-Alvarez and Nieto-Antolín, 2007, Hughes and Mina, 2010 and Pajak, 2010), but it is an under-explored area in connection with developing countries. Argentina, like other developing countries, is characterized by low investment in innovation, and this is mainly biased to embodied technologies, which is reflected in the country’s low levels of innovation novelty. An analysis of how manufacturing firms protect their innovations in the context of countries like Argentina is therefore relevant in order to provide new evidence on this topic. To address this issue, the conceptual framework developed in the second section of this paper re-examines the first area of discussion mentioned above, that is, the relationship between innovation and appropriation. The framework includes an analysis of the mechanisms that firms use to appropriate the results of their innovations and a discussion of the factors determining such decisions. The third section briefly presents the innovative context in Argentina, characterizing the type and magnitude of innovative efforts industrial firms make and the type of results they obtain. The fourth section specifies the methodology used in the analysis and includes a brief description of data and indicators. The fifth section contains the main results of the paper, including descriptive statistics on the use of appropriation mechanisms and the results of probit models for the identification of determining factors. The sixth section contains conclusions.

In this paper, evidence on the use of innovation appropriation mechanisms in Argentine industrial companies shows that 90% of firms use at least one of the mechanisms identified by the literature. The descriptive statistics also show that strategic mechanisms are preferred over legal ones. While this result is consistent with evidence from developed countries, it is also to be expected, given the type of effort made and the low novelty of innovations obtained in Argentine manufacturing. In this context, the first-mover strategy is the favorite mechanism (60%), as in other countries for which there is evidence. However, in the Argentine case, as explained in the results section, the first-mover strategy means making successive incremental innovations rather than being the first firm to introduce a new technology to the market. Also coinciding with the literature, patents are only used by a minority of firms (20%), even though the data are biased towards this mechanism as the agricultural machinery sector-one of the most patent-oriented in Argentina-is over-represented in the sample. Results also show that firms use more than one mechanism on the basis of their complementarities, except in the case of patents and secrecy, which appear to be alternative mechanisms. Sectoral heterogeneity in the use of appropriation mechanisms is another clear result, indicating the existence of different sectoral appropriation patterns. These sectoral appropriation patterns are the result of different sectoral innovation patterns. Similarly, in terms of size, while firms with less than 90 employees reported a clear preference for strategic mechanisms, firms with more than 90 employees show a rate of usage of legal mechanisms. A similar gap between different size firms can also observed regarding the use of secrecy, which is used to a much lesser degree by larger companies. In this sense, as reported by the literature, and is probably more accentuated in the Argentine case, the largest companies make more intensive use of patents and smaller firms rely more on secrecy. From the analytical perspective, this paper presents a theoretical approach that considers that the characteristics of the innovation process are relevant factors when explaining the choice of appropriation mechanisms. In other words, contrary to the ex-ante approach to appropriability, this paper argues that appropriation strategy emerges along with the innovation process. As such, it analyzes the determinants of the appropriation strategy followed by Argentine firms once they have successfully innovated. The probit models specified confirm that the choice of different appropriation mechanisms can be explained by the characteristics of the innovation process. However, while this is clearly true for the choice of strategic mechanisms, the use of legal mechanisms is based more on sectoral factors and firms’ structural characteristics, such as size and age. Most of the descriptive results are coherent with prior evidence, while the analyses of determining factors are also in line with expectations. However, in both cases, many results give also rise to interpretations based on the innovative characteristics of Argentine manufacturing. In this way, in the analysis of results it was highlighted that the type of innovative efforts, results, cooperation, and support that characterize Argentine manufactures were very significant to understanding the descriptive statistics on the use of appropriation mechanisms and the results of probit models on the determinants of the use of each mechanism. Given that innovative behavior influences the appropriation strategy, it would be desirable to have more evidence on developing countries in order to better understand the scope of appropriation strategies and identify stylized facts on this issue in contexts where most innovative efforts are not based on R&D and world-first innovations are scarce.