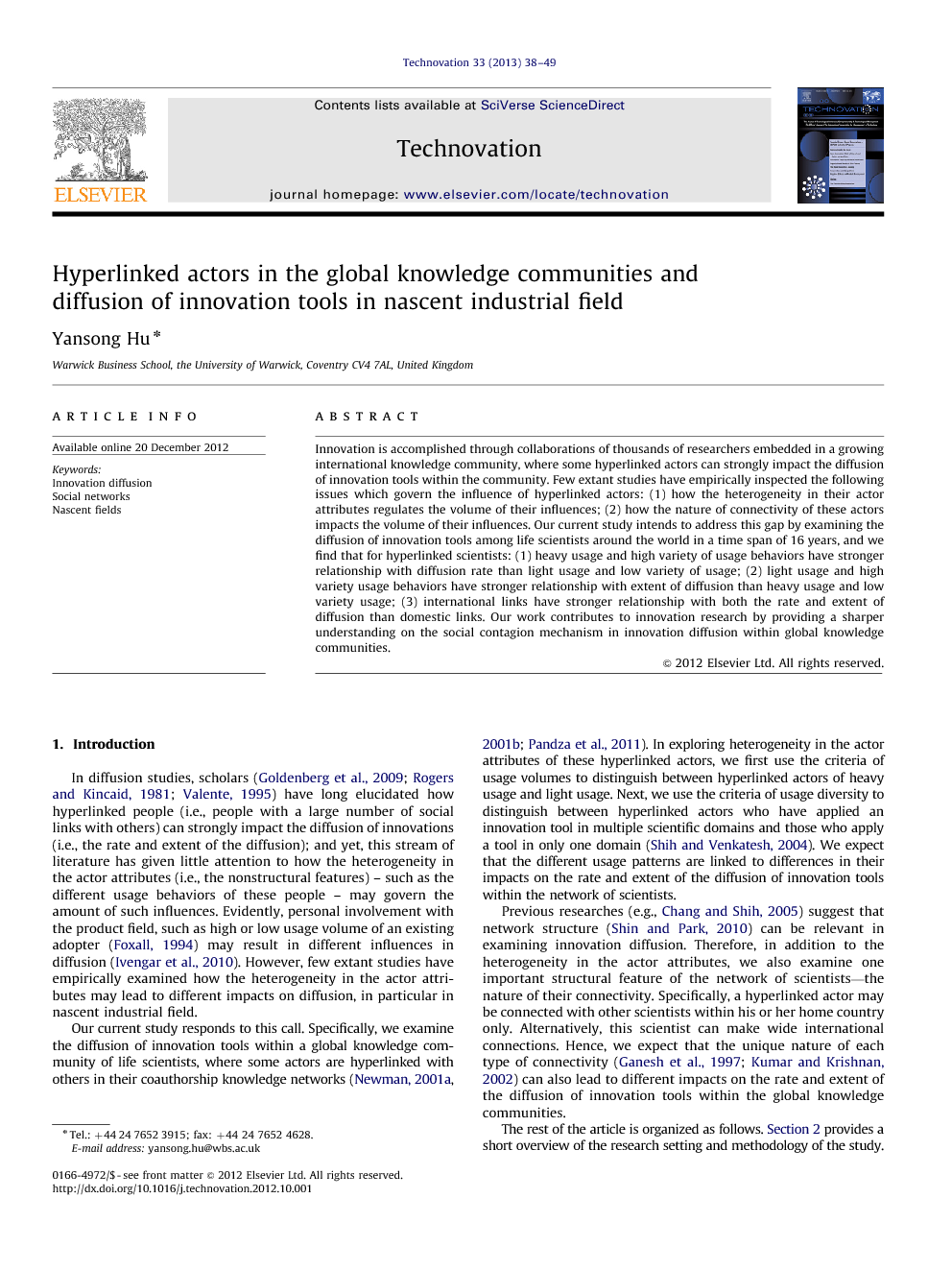 Innovation is accomplished through collaborations of thousands of researchers embedded in a growing international knowledge community, where some hyperlinked actors can strongly impact the diffusion of innovation tools within the community. Few extant studies have empirically inspected the following issues which govern the influence of hyperlinked actors: (1) how the heterogeneity in their actor attributes regulates the volume of their influences; (2) how the nature of connectivity of these actors impacts the volume of their influences. Our current study intends to address this gap by examining the diffusion of innovation tools among life scientists around the world in a time span of 16 years, and we find that for hyperlinked scientists: (1) heavy usage and high variety of usage behaviors have stronger relationship with diffusion rate than light usage and low variety of usage; (2) light usage and high variety usage behaviors have stronger relationship with extent of diffusion than heavy usage and low variety usage; (3) international links have stronger relationship with both the rate and extent of diffusion than domestic links. Our work contributes to innovation research by providing a sharper understanding on the social contagion mechanism in innovation diffusion within global knowledge communities.

In diffusion studies, scholars (Goldenberg et al., 2009, Rogers and Kincaid, 1981 and Valente, 1995) have long elucidated how hyperlinked people (i.e., people with a large number of social links with others) can strongly impact the diffusion of innovations (i.e., the rate and extent of the diffusion); and yet, this stream of literature has given little attention to how the heterogeneity in the actor attributes (i.e., the nonstructural features) – such as the different usage behaviors of these people – may govern the amount of such influences. Evidently, personal involvement with the product field, such as high or low usage volume of an existing adopter (Foxall, 1994) may result in different influences in diffusion (Ivengar et al., 2010). However, few extant studies have empirically examined how the heterogeneity in the actor attributes may lead to different impacts on diffusion, in particular in nascent industrial field. Our current study responds to this call. Specifically, we examine the diffusion of innovation tools within a global knowledge community of life scientists, where some actors are hyperlinked with others in their coauthorship knowledge networks (Newman, 2001a, Newman, 2001b and Pandza et al., 2011). In exploring heterogeneity in the actor attributes of these hyperlinked actors, we first use the criteria of usage volumes to distinguish between hyperlinked actors of heavy usage and light usage. Next, we use the criteria of usage diversity to distinguish between hyperlinked actors who have applied an innovation tool in multiple scientific domains and those who apply a tool in only one domain (Shih and Venkatesh, 2004). We expect that the different usage patterns are linked to differences in their impacts on the rate and extent of the diffusion of innovation tools within the network of scientists. Previous researches (e.g., Chang and Shih, 2005) suggest that network structure (Shin and Park, 2010) can be relevant in examining innovation diffusion. Therefore, in addition to the heterogeneity in the actor attributes, we also examine one important structural feature of the network of scientists—the nature of their connectivity. Specifically, a hyperlinked actor may be connected with other scientists within his or her home country only. Alternatively, this scientist can make wide international connections. Hence, we expect that the unique nature of each type of connectivity (Ganesh et al., 1997 and Kumar and Krishnan, 2002) can also lead to different impacts on the rate and extent of the diffusion of innovation tools within the global knowledge communities. The rest of the article is organized as follows. Section 2 provides a short overview of the research setting and methodology of the study. Then Section 3 moves on to give a review of the theoretical background and literatures and formulate the hypotheses put to test through the regressions. Section 4 describes the data, the variables and methodology. Next Section 5 presents the results and discusses the implications. Section 6 conducts additional analysis as robustness checks to our results. Finally Section 7 concludes and proposes future research directions.

Innovation is accomplished through collaborations of thousands of researchers. Groups of researchers may function within scientific knowledge community as if it were a new emergent organizational form (Crane, 1972 and Kuhn, 1962). Despite the important role of hyperlinked actors within the scientific knowledge community, evidently few studies have empirically inspected the heterogeneity in the actor attributes, the nature of connectivity of hyperlinked actors that may significantly regulate the social contagion effects in the diffusion process of innovation tools. Our current study responds to this call by examining some of the key issues unaddressed in previous research in studying social network effects in diffusion. We find that heterogeneity in the actor attributes and the nature of connectivity significantly impact the social contagion effects from hyperlinked actors. Furthermore, we demonstrate that a small sample of hyperlinked actors can predict the diffusion outcome of an innovation tool. Innovation diffusion is an inherently complex phenomenon, and our research has several limitations, some of which offer possibilities for further research. For example, we only analyze innovation tools in the life science industry. Future research may collect data across other product categories of innovations, such as software products. Moreover, in looking into the nature of connections, we only differentiate international and domestic links. Although such a differentiation is important and relevant in the context of global knowledge communities, other measures on the nature of connections (Niedergassel and Leker, 2011) would be helpful to delve into the underlying structural issues even further. To conclude, although our study is subject to limitations, we believe that the phenomenon of innovations diffusion within global knowledge communities is important yet under-studied. Our findings on hyperlinked actors offer a baseline for constructing future models of innovation diffusion within the emergent organization of knowledge communities.