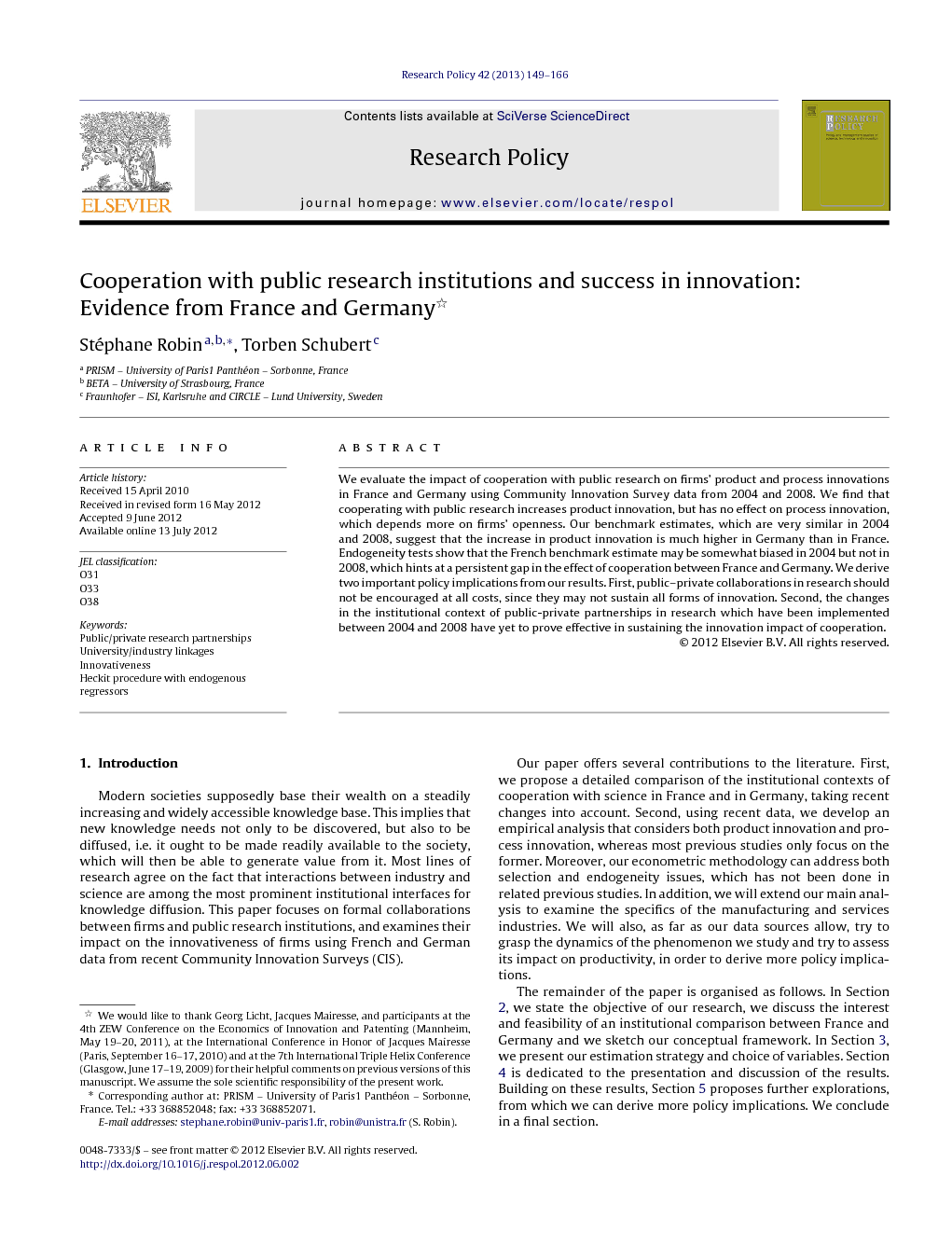 We evaluate the impact of cooperation with public research on firms’ product and process innovations in France and Germany using Community Innovation Survey data from 2004 and 2008. We find that cooperating with public research increases product innovation, but has no effect on process innovation, which depends more on firms’ openness. Our benchmark estimates, which are very similar in 2004 and 2008, suggest that the increase in product innovation is much higher in Germany than in France. Endogeneity tests show that the French benchmark estimate may be somewhat biased in 2004 but not in 2008, which hints at a persistent gap in the effect of cooperation between France and Germany. We derive two important policy implications from our results. First, public–private collaborations in research should not be encouraged at all costs, since they may not sustain all forms of innovation. Second, the changes in the institutional context of public-private partnerships in research which have been implemented between 2004 and 2008 have yet to prove effective in sustaining the innovation impact of cooperation.

Modern societies supposedly base their wealth on a steadily increasing and widely accessible knowledge base. This implies that new knowledge needs not only to be discovered, but also to be diffused, i.e. it ought to be made readily available to the society, which will then be able to generate value from it. Most lines of research agree on the fact that interactions between industry and science are among the most prominent institutional interfaces for knowledge diffusion. This paper focuses on formal collaborations between firms and public research institutions, and examines their impact on the innovativeness of firms using French and German data from recent Community Innovation Surveys (CIS). Our paper offers several contributions to the literature. First, we propose a detailed comparison of the institutional contexts of cooperation with science in France and in Germany, taking recent changes into account. Second, using recent data, we develop an empirical analysis that considers both product innovation and process innovation, whereas most previous studies only focus on the former. Moreover, our econometric methodology can address both selection and endogeneity issues, which has not been done in related previous studies. In addition, we will extend our main analysis to examine the specifics of the manufacturing and services industries. We will also, as far as our data sources allow, try to grasp the dynamics of the phenomenon we study and try to assess its impact on productivity, in order to derive more policy implications. The remainder of the paper is organised as follows. In Section 2, we state the objective of our research, we discuss the interest and feasibility of an institutional comparison between France and Germany and we sketch our conceptual framework. In Section 3, we present our estimation strategy and choice of variables. Section 4 is dedicated to the presentation and discussion of the results. Building on these results, Section 5 proposes further explorations, from which we can derive more policy implications. We conclude in a final section.