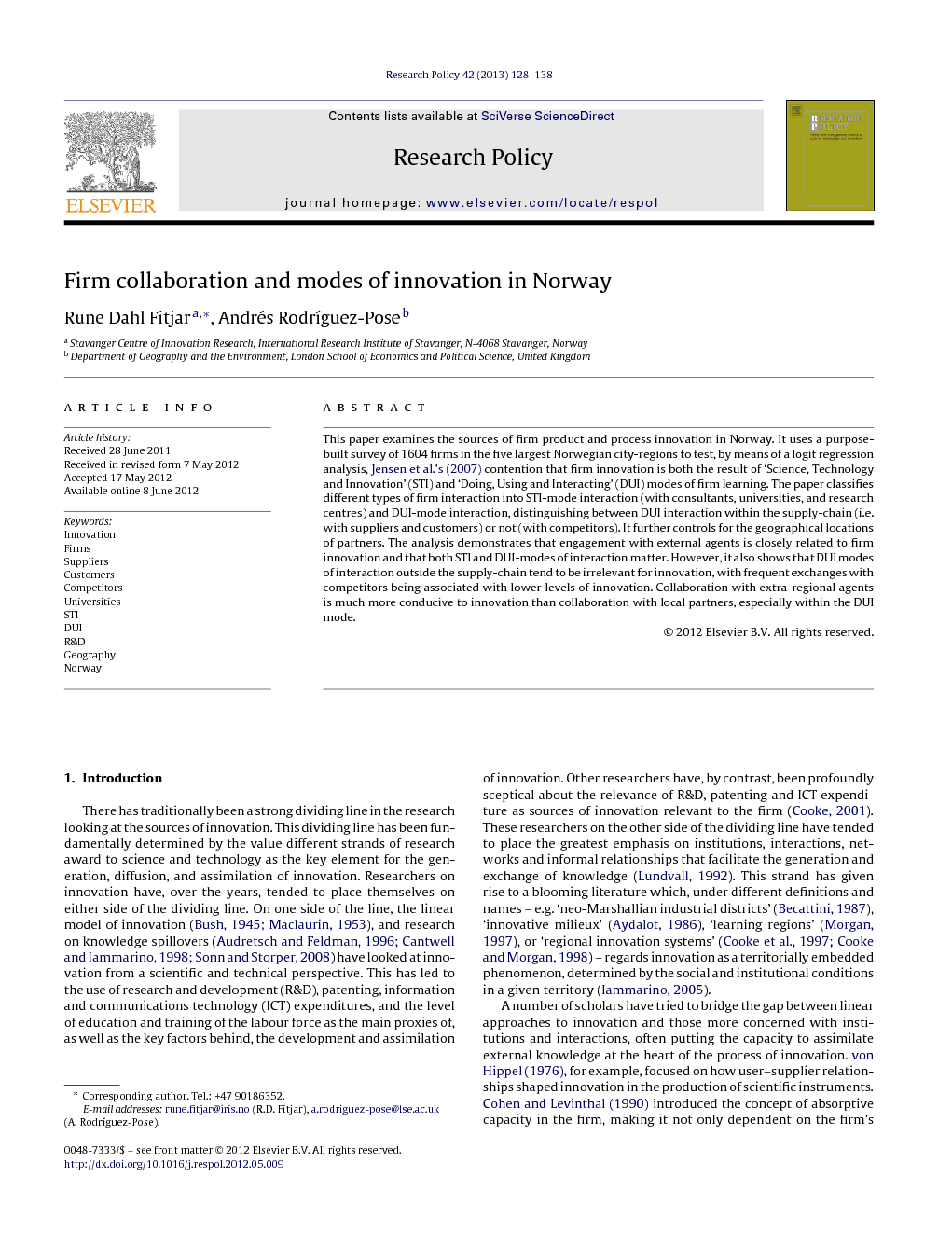 This paper examines the sources of firm product and process innovation in Norway. It uses a purpose-built survey of 1604 firms in the five largest Norwegian city-regions to test, by means of a logit regression analysis, Jensen et al.’s (2007) contention that firm innovation is both the result of ‘Science, Technology and Innovation’ (STI) and ‘Doing, Using and Interacting’ (DUI) modes of firm learning. The paper classifies different types of firm interaction into STI-mode interaction (with consultants, universities, and research centres) and DUI-mode interaction, distinguishing between DUI interaction within the supply-chain (i.e. with suppliers and customers) or not (with competitors). It further controls for the geographical locations of partners. The analysis demonstrates that engagement with external agents is closely related to firm innovation and that both STI and DUI-modes of interaction matter. However, it also shows that DUI modes of interaction outside the supply-chain tend to be irrelevant for innovation, with frequent exchanges with competitors being associated with lower levels of innovation. Collaboration with extra-regional agents is much more conducive to innovation than collaboration with local partners, especially within the DUI mode.

In this paper we have put Jensen et al.’s (2007) idea that both DUI industrial type and STI scientific type relationships are basic sources for the innovative capacity of firms to the test. We have examined this theory using a sample of 1604 Norwegian firms with more than 10 employees. We consider four different categories of innovation and distinguish between DUI generally formal types of interaction within the supply-chain and those outside the supply-chain, usually of a more informal nature. We have also paid special attention to the geographical dimension of the interactions, differentiating between interactions conducted locally and those at a distance. The results of the analysis confirm that, in the case of Norway, engagement with external agents is closely related to firm innovation. Firms which engage in collaboration with external agents tend to be more innovative than firms that rely on their own resources for innovation. The analysis also validates the hypothesis that both STI and DUI-modes of interaction matter for innovation. However, not all DUI-modes of interaction matter in the same way. Whereas interaction with suppliers tends to promote greater levels of product and process innovation, both of the incremental and radical type, and interaction with customers is particularly beneficial for product innovation, collaboration with competitors has a detrimental effect on the propensity of firms to innovate and partnerships within the same conglomerate only matter for incremental product innovation. The introduction of the geographical component also yields interesting results. Interaction with local agents, by and large, tends to have very little impact on raising a firm's innovation potential. The main exception is STI-type interaction with local universities. Interacting at a distance, however, makes a significant difference for the innovation potential of Norwegian firms. Firms which have established links with extra-regional universities, research centres and consultancies and, in particular, with suppliers and customers outside the region have seen their innovation potential increase radically in virtually all types of innovation. The results for Norwegian firms challenge some long held beliefs about where firms get their innovative capacity. Although it is true that both STI- and DUI-modes of interaction matter, it seems that it is the collaboration of a more formal type that makes all the difference. In our survey we have found significant evidence of interaction of the informal type, such as interaction with competitors and with customers within the region. Interaction which, according to the literature, simply happens because ‘something is in the air’ or as a result of ‘being there’, of sharing the same geographical location (Gertler, 1995). However, there is little indication in the results that this form of interaction and the tacit knowledge it generates leads to substantially higher innovation by Norwegian firms. Excessive cognitive or organised proximity among Norwegian agents in what are relatively small and self-contained city-regions may be detrimental to innovation, with repeated exchanges not leading to the generation of knowledge which can be used and transformed into innovation by local firms (Boschma, 2005 and Torre and Rallet, 2005). Too much interaction with local competitors may lead to lock-in and therefore even hamper innovation, in clear contrast with one of the key ideas on which the literature on industrial districts was based. The heterogeneity among agents is what matters for innovation and such heterogeneity is more common at a distance than in close geographical proximity (Srholec and Verspagen, 2008). Firms are more likely to innovate when they purposely look for partners which may provide knowledge that can then be easily transformed into new ideas. And this is regardless of whether the partners are STI-type partners (mainly universities) or DUI partners within the supply-chain. The most important factor is that these partners have to be able to offer the new knowledge that the firms need and this is achieved, in opposition with the theories of agglomeration, regional innovation systems, and local buzz, by searching for specific partners which may not only be at a considerable cognitive distance from the firms involved, but also at a considerable geographical distance. Overall, this research provides a few answers but raises a whole raft of new questions regarding the role of clusters, tacit knowledge and policy in Norway. It also calls for more in-depth analyses of how collaborations by what are generally relatively small firms emerge with distant partners. Looking into these questions will give us a clearer understanding of what seems a more complex panorama about the sources of firm innovation in Norway than the existing literature would have led us to believe.