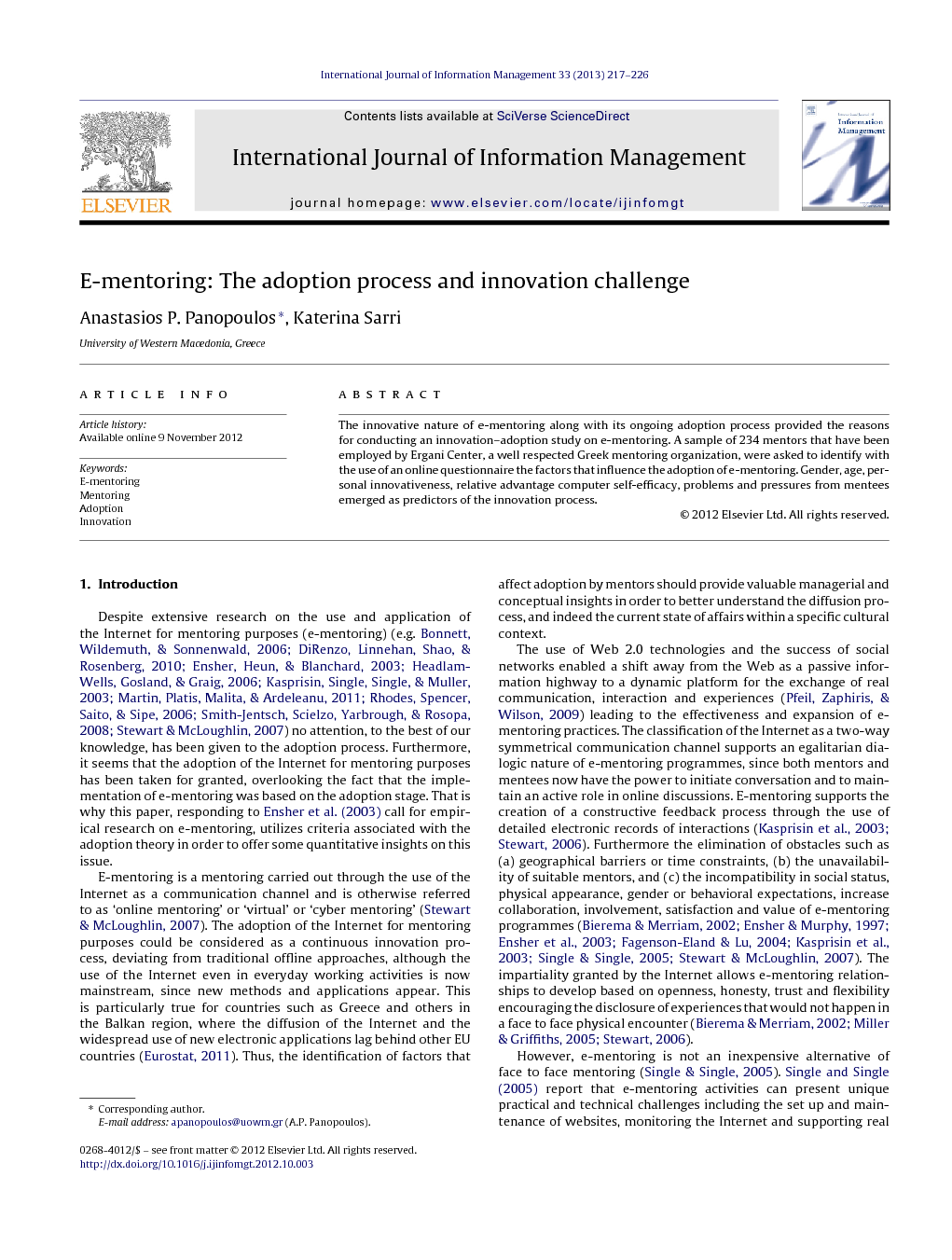 The innovative nature of e-mentoring along with its ongoing adoption process provided the reasons for conducting an innovation–adoption study on e-mentoring. A sample of 234 mentors that have been employed by Ergani Center, a well respected Greek mentoring organization, were asked to identify with the use of an online questionnaire the factors that influence the adoption of e-mentoring. Gender, age, personal innovativeness, relative advantage computer self-efficacy, problems and pressures from mentees emerged as predictors of the innovation process.

Despite extensive research on the use and application of the Internet for mentoring purposes (e-mentoring) (e.g. Bonnett et al., 2006, DiRenzo et al., 2010, Ensher et al., 2003, Headlam-Wells et al., 2006, Kasprisin et al., 2003, Martin et al., 2011, Rhodes et al., 2006, Smith-Jentsch et al., 2008 and Stewart and McLoughlin, 2007) no attention, to the best of our knowledge, has been given to the adoption process. Furthermore, it seems that the adoption of the Internet for mentoring purposes has been taken for granted, overlooking the fact that the implementation of e-mentoring was based on the adoption stage. That is why this paper, responding to Ensher et al. (2003) call for empirical research on e-mentoring, utilizes criteria associated with the adoption theory in order to offer some quantitative insights on this issue. E-mentoring is a mentoring carried out through the use of the Internet as a communication channel and is otherwise referred to as ‘online mentoring’ or ‘virtual’ or ‘cyber mentoring’ (Stewart & McLoughlin, 2007). The adoption of the Internet for mentoring purposes could be considered as a continuous innovation process, deviating from traditional offline approaches, although the use of the Internet even in everyday working activities is now mainstream, since new methods and applications appear. This is particularly true for countries such as Greece and others in the Balkan region, where the diffusion of the Internet and the widespread use of new electronic applications lag behind other EU countries (Eurostat, 2011). Thus, the identification of factors that affect adoption by mentors should provide valuable managerial and conceptual insights in order to better understand the diffusion process, and indeed the current state of affairs within a specific cultural context. The use of Web 2.0 technologies and the success of social networks enabled a shift away from the Web as a passive information highway to a dynamic platform for the exchange of real communication, interaction and experiences (Pfeil, Zaphiris, & Wilson, 2009) leading to the effectiveness and expansion of e-mentoring practices. The classification of the Internet as a two-way symmetrical communication channel supports an egalitarian dialogic nature of e-mentoring programmes, since both mentors and mentees now have the power to initiate conversation and to maintain an active role in online discussions. E-mentoring supports the creation of a constructive feedback process through the use of detailed electronic records of interactions (Kasprisin et al., 2003 and Stewart, 2006). Furthermore the elimination of obstacles such as (a) geographical barriers or time constraints, (b) the unavailability of suitable mentors, and (c) the incompatibility in social status, physical appearance, gender or behavioral expectations, increase collaboration, involvement, satisfaction and value of e-mentoring programmes (Bierema and Merriam, 2002, Ensher and Murphy, 1997, Ensher et al., 2003, Fagenson-Eland and Lu, 2004, Kasprisin et al., 2003, Single and Single, 2005 and Stewart and McLoughlin, 2007). The impartiality granted by the Internet allows e-mentoring relationships to develop based on openness, honesty, trust and flexibility encouraging the disclosure of experiences that would not happen in a face to face physical encounter (Bierema and Merriam, 2002, Miller and Griffiths, 2005 and Stewart, 2006). However, e-mentoring is not an inexpensive alternative of face to face mentoring (Single & Single, 2005). Single and Single (2005) report that e-mentoring activities can present unique practical and technical challenges including the set up and maintenance of websites, monitoring the Internet and supporting real two-way communication. These challenges result in significant upfront or operational costs which are difficult to coordinate and manage. That is why e-mentoring is preferred in large scale projects where economy of size, availability of resources and gathering of expertise is achieved in contrast to face to face mentoring which is constrained to relatively small organizations (Kasprisin et al., 2003 and Single and Muller, 2001). Such projects are the International Telementor Programme (www.telementoring.org) and MentorNet (www.mentornet.net). Moreover, the lack of additional information that body language and non-verbal communication adds to face to face mentoring requires experience in the use of electronic communication, since it makes e-mentoring procedures more vulnerable to misinterpretations and misunderstandings (Ensher et al., 2003 and Stewart and McLoughlin, 2007). As a result, those relationships are characterized as “weak ties” and can lead to easily broken bonds (Rhodes et al., 2006). Finally, questions and fears are raised due to security and confidentiality issues, expressed by both mentors and mentees participating in e-mentoring programmes (Rhodes et al., 2006). It is obvious that mentors and mentees today find themselves to be in the midst of a learning curve, since adoption of e-mentoring is a slow continuous process and their effort to maximize e-mentoring results comprises an ongoing challenge (DiRenzo et al., 2010). The advent of social software tools combined with Web 2.0 applications can maintain the social capital while at the same time foster informational, psychological and instrumental benefits, thus promoting e-mentoring programmes to relationship building tools. Based on the adoption theories of innovation, we try to shed light on the adoption of e-mentoring in an effort to accelerate its diffusion and enhance its effectiveness. This paper is organized as follows: in Section 2 the theoretical background is described, in Section 3 the methodology is analyzed, in Section 4 results are presented, in Section 5 the discussion of the results is made, and finally in Section 6 the conclusions are offered.

6.1. Theoretical implications This study offers valuable theoretical insights both in the innovation adoption literature as well as in the e-mentoring literature. The use of an innovation adoption model other than the usual ones (Rogers, TAM, TRA) helps in the creation of a customized model for the e-mentoring field. A holistic, enriched and customized approach when analyzing an innovation adoption phenomenon is necessary, given that each case differs significantly and, as a result, special attention should be given to alternative factors that apply in each situation. Furthermore, the variables of computer self-efficacy and personal innovativeness should be incorporated in the adoption model when an information technology adoption is examined. As far as the e-mentoring field is concerned, it is the first time that information is obtained about the adoption and not the implementation stage. This is important, since many of the observations concerning the use of the e-mentoring, such as the issue of gender or age and the attitudes and behaviors of mentors, originate in the adoption level. By acknowledging the initial source of those observations and not treating them as the outcome of an implementation procedure, an improvement of the theoretical framework for e-mentoring is achieved. Further, the advent of relative advantage as an adoption factor of e-mentoring justifies the reports in the literature (DiRenzo et al., 2010, Ensher et al., 2003, Headlam-Wells et al., 2006, Rhodes et al., 2006, Single and Single, 2005 and Stewart and McLoughlin, 2007) about the crucial significance of the advantages and positive elements of e-mentoring compared to traditional methods. Personal innovativeness and computer self efficacy explain the innovative IT nature of the Internet as a communication channel, while the significance of mentees pressures in the adoption procedure verifies its egalitarian two way symmetrical nature. 6.2. Managerial implications From a practical point of view, the findings of this study can be used by organizations and individuals in order to establish or improve their e-mentoring activities. First of all, investments in hardware and technological e-mentoring infrastructure should be made to increase effectiveness and overcome the obstacles reported by mentors. The answer to the problems e-mentors report could be the continuous technological support when e-mentoring programs are implemented and the supply of technological equipment and information infrastructure. This is particularly important for countries where Internet use and information technology innovation acceptance have low penetration rates. Additionally, training in the use of the Internet and computer software should be provided prior to the implementation of an e-mentoring program in an effort to strengthen computer self-efficacy of mentors. By doing so, mentors will be empowered in IT use, thus adjusting more rapidly to e-mentoring requirements and challenges. It is also essential every time to point out to mentors, before every case of implementation, the advantages of using e-mentoring compared to traditional methods and explain to them why it is important to use e-mentoring. This should be mandatory when employing mentors that are women and older in age. What is more, personal innovativeness should be an additional criterion required for mentors in e-mentoring programs. Finally, attention should be given to the mentees as well; they should be encouraged to initiate contact with mentors and engage in a two way symmetrical communication process. That is why monitoring of the e-mentoring channel and constant electronic feedback by mentees should be encouraged. 6.3. Limitations – future research The outcome of this study is restricted by time since the adoption process, according to the literature (Al-Qirim, 2007, Kitchen and Panopoulos, 2010, Lynn et al., 2002 and Rogers, 1995), is not an instant phenomenon but rather an evolutionary procedure. Furthermore, our sample consisted exclusively by business mentors and as a result other groups associated with e-mentoring adoption, such as the mentees or college mentors, were not studied at all. Finally, since the cultural environment studied is restricted only in Greece and there is evidence from different innovation studies in IT (Hasan and Ditsa, 1999, Phillips et al., 1994, Png et al., 2001 and van Everdingen and Waarts, 2003) as well as mentoring studies (Feldman and Bolino, 1999, Osula and Irvin, 2009 and Sanchez and Colon, 2005) supporting that IT innovation adoption procedure and mentoring process are affected by the cultural environment, the findings of this study can be applied only for the specific or for similar cultural environments (for example, countries in the Balkan region). Moreover, taking into account that the direct link of obstacles could be attributed to the country level of IT education, use and infrastructure, we call for a broader and thorough examination of the cultural environment in the adoption process of e-mentoring. Future studies should focus on (a) the global adoption of e-mentoring by expanding the sample in different countries exploring also the potential influence of cultural differences (if any), (b) the adoption of e-mentoring by mentees since they might face a different adoption procedure and they are already connected with the adoption process of mentors through the pressures from mentees variable, (c) the connection of e-mentoring adoption with e-mentoring effectiveness and (d) the implementation of a longitudinal approach in order to study the evolution of the e-mentoring adoption process through time.