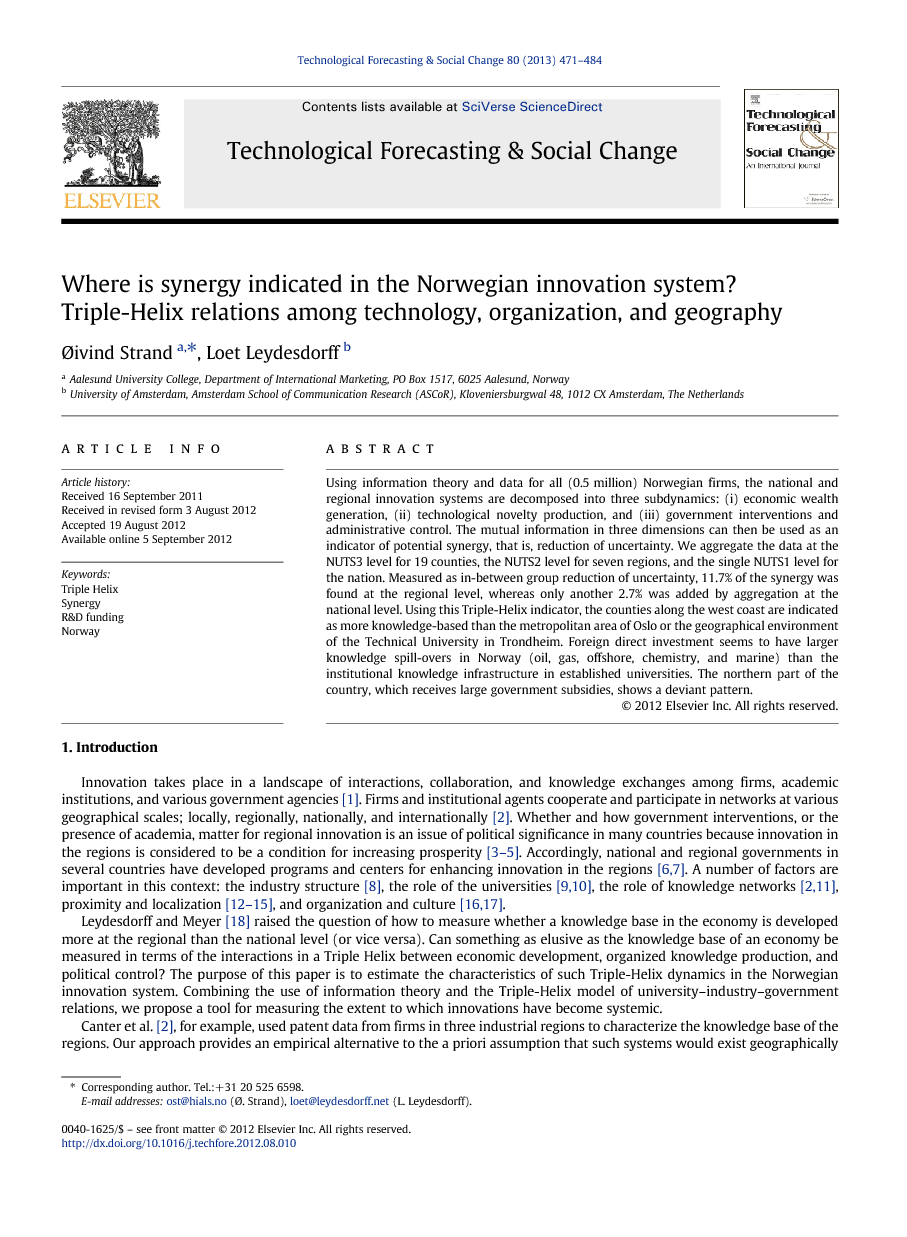 Using information theory and data for all (0.5 million) Norwegian firms, the national and regional innovation systems are decomposed into three subdynamics: (i) economic wealth generation, (ii) technological novelty production, and (iii) government interventions and administrative control. The mutual information in three dimensions can then be used as an indicator of potential synergy, that is, reduction of uncertainty. We aggregate the data at the NUTS3 level for 19 counties, the NUTS2 level for seven regions, and the single NUTS1 level for the nation. Measured as in-between group reduction of uncertainty, 11.7% of the synergy was found at the regional level, whereas only another 2.7% was added by aggregation at the national level. Using this Triple-Helix indicator, the counties along the west coast are indicated as more knowledge-based than the metropolitan area of Oslo or the geographical environment of the Technical University in Trondheim. Foreign direct investment seems to have larger knowledge spill-overs in Norway (oil, gas, offshore, chemistry, and marine) than the institutional knowledge infrastructure in established universities. The northern part of the country, which receives large government subsidies, shows a deviant pattern.

When analyzing the Norwegian economy in terms of Triple-Helix synergies, we find a similar pattern at different geographical scales. These results suggest that the counties and regions that contribute most to the knowledge base of the Norwegian economy are located on the western coast of Norway and in Nordland. Within the framework of the Triple-Helix theory, these areas seem to have achieved a balance between the three sub-dynamics to a larger extent than other parts of the country. In the northern part of the country government intervention is so substantial that the dynamics of the economy are changed. This can best be seen by the lack of new small companies and the high level of public employees (40%) in these counties. The exception is Tromsø, the main university city in the north, where the number of start-ups is high. One of the reasons may be the government's focus on marine biotechnological research at this university. However, most of the marine industry is located in Vestlandet. Most of the research capacity in Norway is located in Oslo and Trondheim, in areas with weak industrial traditions. The industrial counties on the west coast are characterized by a strong internationally oriented manufacturing industry directed towards maritime, offshore and marine industry. These firms operate in global markets. The knowledge base is synthetic [7], with a low share of formal higher education. Møre og Romsdal contains the strongest industry cluster in Norway: the maritime cluster. The high-tech clusters, located in other parts of the country are probably too small to influence the synergy at the NUTS3 level significantly. At the NUTS2 level, the highest level of synergy is also found in Vestlandet. This shows that our results are robust against changes in the geographical scale. There are some interesting differences between the geographical influence on the results in the case of Norway or the Netherlands. Whereas in the data from the Netherlands [19], the geographical uncertainty is correlated with the number of firms in the region (r = 0.76), the Norwegian geographical uncertainty correlates negatively with the number of firms (r = − 0.61). However, this may be due to the fact that the geographical units used in the study from the Netherlands are postcodes in a country which is densely populated, in contrast to the Norwegian data which are based on a high number of municipalities with a varying size in a sparsely populated country. The units in the postcodes are expected to be chosen to ensure an efficient post distribution, with units as equal as possible. The borders of the municipalities in Norway are based on historical and geographic factors. This shows that comparisons between various geographical units should be done carefully. The comparison between public R&D expenditure and the synergy of the knowledge base provides another negative correlation in the case of Norway. In our opinion, these findings confirm the conclusions of Onsager et al. [28] and OECD [32] that areas in Norway with high concentrations of knowledge institutions (and hence a high level of higher education) seem to live in ‘separate’ worlds, uncoupled from the needs of the industry. Easy access to public research funding through networks and co-location with research councils and political decision makers makes the transaction costs of engagement with fellow academics lower than those with industry [31]. At the national level, Shelton and Leydesdorff [73] found that high levels of private R&D funding promote cooperation with industry and results in a larger numbers of patents. A high level of public funded R&D results in an increased number of academic papers. This underpins the findings of Benner and Sandström [65] that institutionalization of a Triple-Helix model is critically dependent upon the form of research funding. There is also a tendency in the academic literature to fail to see the importance of innovation in ‘low-tech’ industries [74]. Foreign factors, such as high FDI, foreign ownership and global customers, are characteristic for the regions and counties with the highest synergy. This may support what Bathelt et al. [75] called a ‘local buzz–global pipeline’ effect, that is, a combination of geographically embedded local knowledge with knowledge from global sources, filtered for relevance by global customers. The dominating industry sectors in these littoral counties are medium-tech manufacturing. Easy access to local tacit knowledge and international knowledge spillovers from customers may be more important than codified academic knowledge. Calculation of the inter-group synergy consequently indicates that synergy occurs at the regional, rather than at the national level. Our results support the findings from previous studies showing that medium-tech manufacturing rather than high-tech manufacturing is associated with synergy [19], [20] and [76]. Our results also show the effect of high levels of government intervention in the northern part of the country [1]. In these regions, our measures were dependent on the scale of the aggregation (NUTS2 or NUTS3). However, public R&D funding is directed towards academic institutions in university cities, whereas regional policies are mostly directed towards the northern region and regions with little industry. The highest synergy in the knowledge functions in the Triple-Helix dynamics is to be found in the industrial counties on the west coast, where medium-tech manufacturing is concentrated and foreign factors associated with operating in global markets enhance synergy to a greater extent than expected.