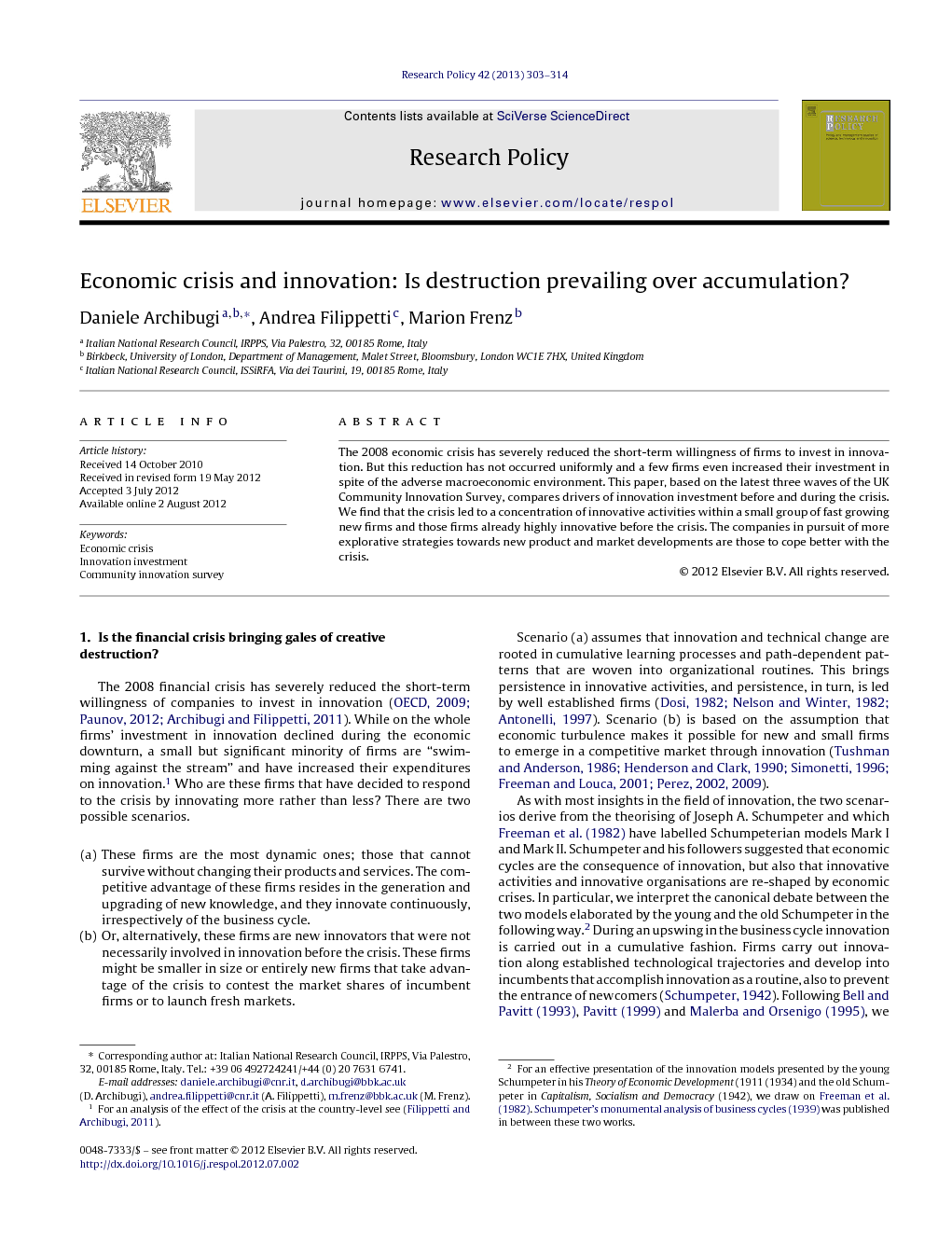 The 2008 economic crisis has severely reduced the short-term willingness of firms to invest in innovation. But this reduction has not occurred uniformly and a few firms even increased their investment in spite of the adverse macroeconomic environment. This paper, based on the latest three waves of the UK Community Innovation Survey, compares drivers of innovation investment before and during the crisis. We find that the crisis led to a concentration of innovative activities within a small group of fast growing new firms and those firms already highly innovative before the crisis. The companies in pursuit of more explorative strategies towards new product and market developments are those to cope better with the crisis.

The aim of this paper was to investigate how the current economic downturn has affected different typologies of innovating firms. During major recessions, the economic landscape is characterized by huge uncertainties about the direction of technological change, demand conditions, and new market opportunities. The first significant result at the aggregate level is that the crisis has substantially reduced the innovation expenditure of the firm. On average, firms in our sample reduced innovation expenditure in 2008 by 8 percent compared to 2006. No doubt that the crisis has brought, at least in its initial stage, “destruction” in the amount of resources devoted to innovation. The second major aggregate result is that innovation expenditure started to be more concentrated: fewer firms were responsible for an increased share of innovation expenditure. We used two well-established, ideal typical scenarios: the creative destruction and creative accumulation – to frame our results. We assumed a clear-cut division according to which a scenario of creative accumulation would prevail in regular times, while a scenario of creative destruction would prevail in times of crisis. We are well aware that a clear-cut division between the two scenarios does not exist. Employing a panel dataset spanning the period 2004–2008 we were able to explore to what extent the innovators during the crisis are also those who were innovating before, or they are new innovators which are taking advantage of the peculiar environment of a major economic downturn. Our evidence strongly supports the case for creative accumulation. Those firms identified as the great innovators in 2004, are responsible for a larger share of innovation expenditure in 2008 compared to 2006. It should also be noted that the great innovators do not stand as increasing innovation before the crisis, in 2006. That is, being a great innovator does not predict increase in innovation investment before the crisis, but it does during the crisis. Put differently, the cumulative, or persistent, nature of innovation activity tends to be more prominent in times of crisis compared to during ordinary times. But does it mean that the crisis is exacerbating the concentration of innovation in a few firms, thus leaving few hopes for dynamic Schumpeterian entrepreneurs? In fact, alongside the great innovators there is another category of firms which is gaining momentum during the crisis by increasing innovation expenditure. They are the fast growing new firms. The latter are firms established between 2000 and 2004 coupled with a faster rate of turnover growth. As with the great innovators, this group of firms does not show an above average behaviour in 2006 but it starts to increase expenditure during the crisis. We then asked what the innovators looked like during the crisis. Particularly, drawing from the research on innovation persistence we investigated those characteristics of the firm which make the firm more likely to keep on innovating, and we applied this framework to the context of the crisis. Similarly to previous studies, we find that size, economic performance, and an exploitation strategy predict increased innovation investment before the crisis. However, when we turn to what happened during the crisis we find interesting differences. Both size and economic performance play a less important role. By contrast, the presence of in-house R&D activity becomes a major predictor of increase in innovation expenditure during the crisis. As for the firm's strategy, pursuing an explorative strategy (including looking into new markets), becomes relatively more important. This evidence suggests that during the current crisis the sources of persistence in innovation are fundamentally two. In the first place, the existence of an R&D department suggests the firm has made a medium or long-term committed to innovation. Secondly, we show the important contribution of a strategy, and in particular of a strategy aimed at exploring new markets and new product developments. Identifying the characteristics of the innovators during the turmoil, as we have tried to do here, can shed some light on how policy instruments interact with technological accumulation and creative destruction. There is little doubt that the old innovators are taking advantage of the turbulent environment to gain momentum. However, the picture is made more complicated by the presence of new entrants who have been growing fast. Our evidence is thus consistent with an innovation environment characterized by the simultaneous presence of both creative destruction and creative accumulation, labelled by Freeman et al. (1982), Schumpeterian models Mark I and Mark II. This bears some implications for policy. On the one hand, policies should support the good innovators, and reward the winners under the assumption that those who won in the past are those better equipped to also win in the future. On the other hand, policies should also encourage the creation of new innovative firms. It is certainly not easy for policy makers to recognize which of the new firms are more likely to be successful and the fact that they are relatively young makes this task even harder. Our data suggests that size alone would not be enough to indicate if a firm will be successful. Other structural characteristics, such as the presence of an R&D department and its past economic performance, seem to play a more important role. We conclude by pointing out some limitations of the study. The analysis presented here is limited by the data and the statistical models. First, the results are confined to the UK, and it will be important to see if they are confirmed for the rest of Europe, the United States as well as emerging countries. Second, data do not allow singling out the dynamics at the industry level. Finally, we could not look at the firms established during the crisis. Perhaps the Bill Gates, Steve Jobs and Mark Zuckerberg of the future are already at work. It would certainly not be the first time that innovation surprises us.