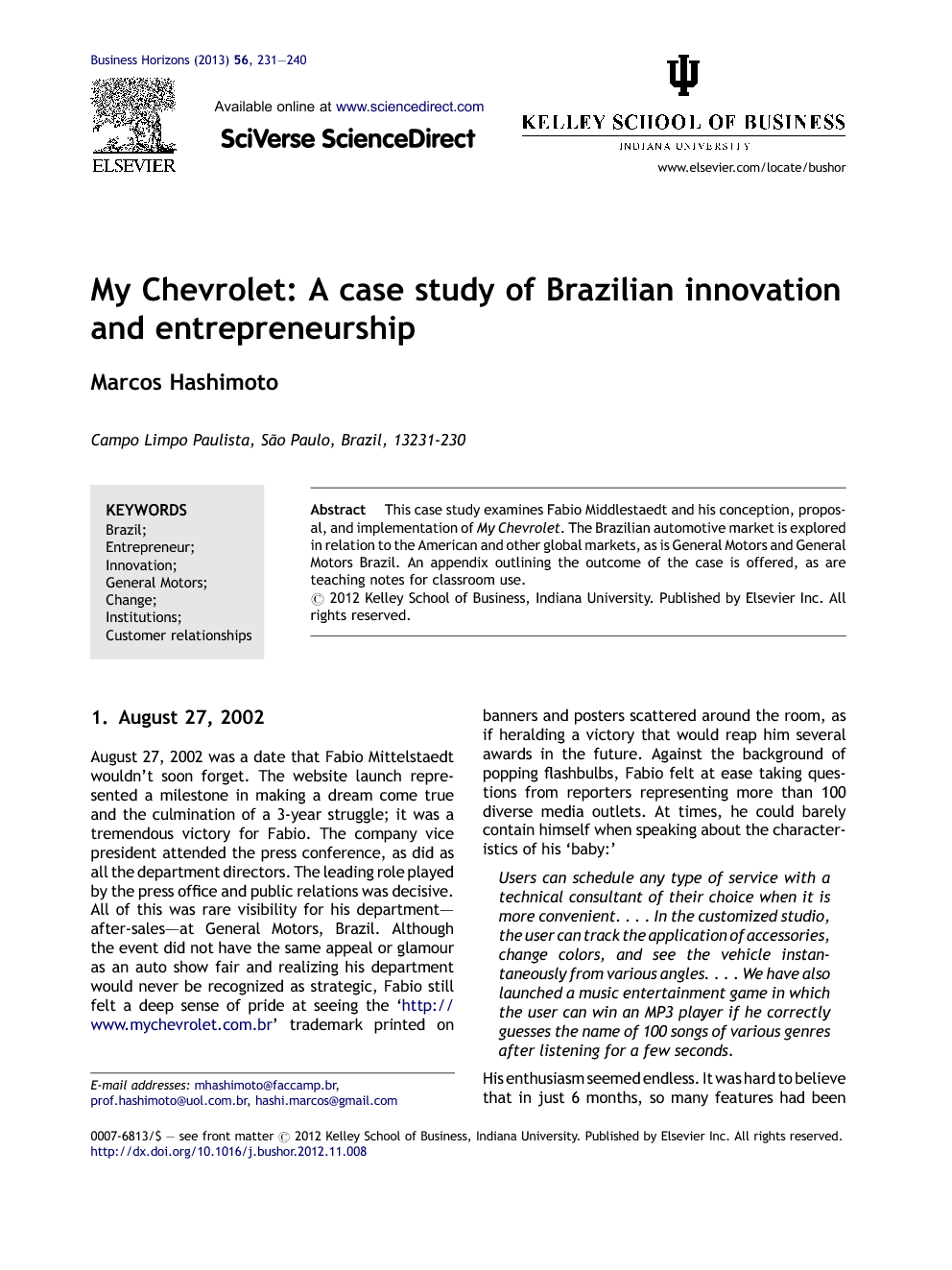 This case study examines Fabio Middlestaedt and his conception, proposal, and implementation of My Chevrolet. The Brazilian automotive market is explored in relation to the American and other global markets, as is General Motors and General Motors Brazil. An appendix outlining the outcome of the case is offered, as are teaching notes for classroom use.

August 27, 2002 was a date that Fabio Mittelstaedt wouldn’t soon forget. The website launch represented a milestone in making a dream come true and the culmination of a 3-year struggle; it was a tremendous victory for Fabio. The company vice president attended the press conference, as did as all the department directors. The leading role played by the press office and public relations was decisive. All of this was rare visibility for his department—after-sales—at General Motors, Brazil. Although the event did not have the same appeal or glamour as an auto show fair and realizing his department would never be recognized as strategic, Fabio still felt a deep sense of pride at seeing the ‘http://www.mychevrolet.com.br’ trademark printed on banners and posters scattered around the room, as if heralding a victory that would reap him several awards in the future. Against the background of popping flashbulbs, Fabio felt at ease taking questions from reporters representing more than 100 diverse media outlets. At times, he could barely contain himself when speaking about the characteristics of his ‘baby:’ Users can schedule any type of service with a technical consultant of their choice when it is more convenient. . . . In the customized studio, the user can track the application of accessories, change colors, and see the vehicle instantaneously from various angles. . . . We have also launched a music entertainment game in which the user can win an MP3 player if he correctly guesses the name of 100 songs of various genres after listening for a few seconds. His enthusiasm seemed endless. It was hard to believe that in just 6 months, so many features had been incorporated into the new site. People involved from the beginning of the project understood Fabio's excitement and felt it was fully justified. That night, Fabio could not sleep. Enthralled by the evening's events, he made a chronological retrospective account of the entire project and thought: ‘Wow, looking back on it now, if I had known what I would have to face to implement the idea, I might never have even begun!’ The idea had come to him so effortlessly and easily that he never imagined the many struggles it would entail. Memories of the most critical moments were now stuck in a past that seemed more distant than it actually was. He remembered how much he had changed in conjunction with the history of the project. He had to acquire some skills out of necessity, while realizing others he never imagined he possessed. A young man who was shy, introspective, and not very sociable, Fabio smiled to himself when he remembered how he loved to spend hours playing video games alone at home or when he told himself that it was okay to have lunch alone almost every day. Now he was recognized in the halls of General Motors, sought after by other departments, greeted, and appreciated. He had gone from an after-sales analyst to an e-business manager. So many things had happened during those 3 years! Throughout these experiences, there had been a lot of learning and a lot of lessons, many of them acquired through trial and error. Still thinking, a frown appeared on his face instead of a smile: ‘I’ve made lots of mistakes! Now, with hindsight, I would neither do much of what I did nor make many of the same decisions. I would never say some of the things I said at the wrong times.’ Fabio was in the habit of reflecting, which helped him consolidate facts and organize thoughts. Now that it was all over and knowing that other challenges and projects were to come, it was the ideal time to think calmly and in detail. What could he have done differently in that project?

Among the many benefits reaped by the project so far is a reduction in costs (R$200,000 to R$300,000 per year saved on printing and binding manuals), customer convenience, and benefits for dealerships arising from new sales opportunities (1,500 sales opportunities a month). The site is also an invaluable tool for the sale of auto parts and services. The GM portfolio is presented on the site and generates a purchase expectation in the virtual environment. Another substantial benefit is the maximization of sales per customer in the one-to-one relationship: - Reaching a customer without needing mediators - Knowing customer preferences and purchasing trends in order to • Build a customer profile throughout the entire period of vehicle ownership • Create and deliver offers customized to the identified behavior of the owner • Allow for cross-selling and up-selling initiatives • Focus sales efforts on more promising clients. My Chevrolet helped answer some questions about how GMB did business: 1. How effective is the use of the Internet to sell vehicles? Were there other uses, as well? 2. Why do dealers have such short-term vision? The issue here is not what you manage to sell today but how you satisfy customers before, during, and mainly after the sale to maintain their lifelong loyalty. 3. Does after-sales represent a competitive edge? Knowing customers throughout the period in which they relate to the company is an invaluable tool for future sales. At the moment, there are 60,000 registered clients, 5,000 visits to the site per day, 3,500 new monthly registrations, 800,000 monthly page views, and 30,000 opportunities of generated sales. This amounts to 2 million visits a year during which an average of 9.8 minutes are spent surfing the site. The following awards rank among its achievements: - ABANET/MSN 2002 award for best Brazilian relationship site - Top 3 and Top 10 of iBEST 2003 in two categories (best Internet site) - About! award for integrated communication 2003 (corporate communication) - Showcase of e-business skills - Winner of iBest 2004 site loyalty category - Two top Marketing of Brazilian Sales and Marketing Directors Association awards 2004 - Customer retention levels jumped from 14% to 25% since the launching of the site. The dream of all executives is to have their names associated with large-scale projects in a major company. Few manage to do so, but Fabio Mittelstaedt took his chance and succeeded with the My Chevrolet site. Today, he is an e-business supervisor and after-sales CRM at GM. Experts in the field consider his idea the greatest customer relationship site in Latin American auto sectors.