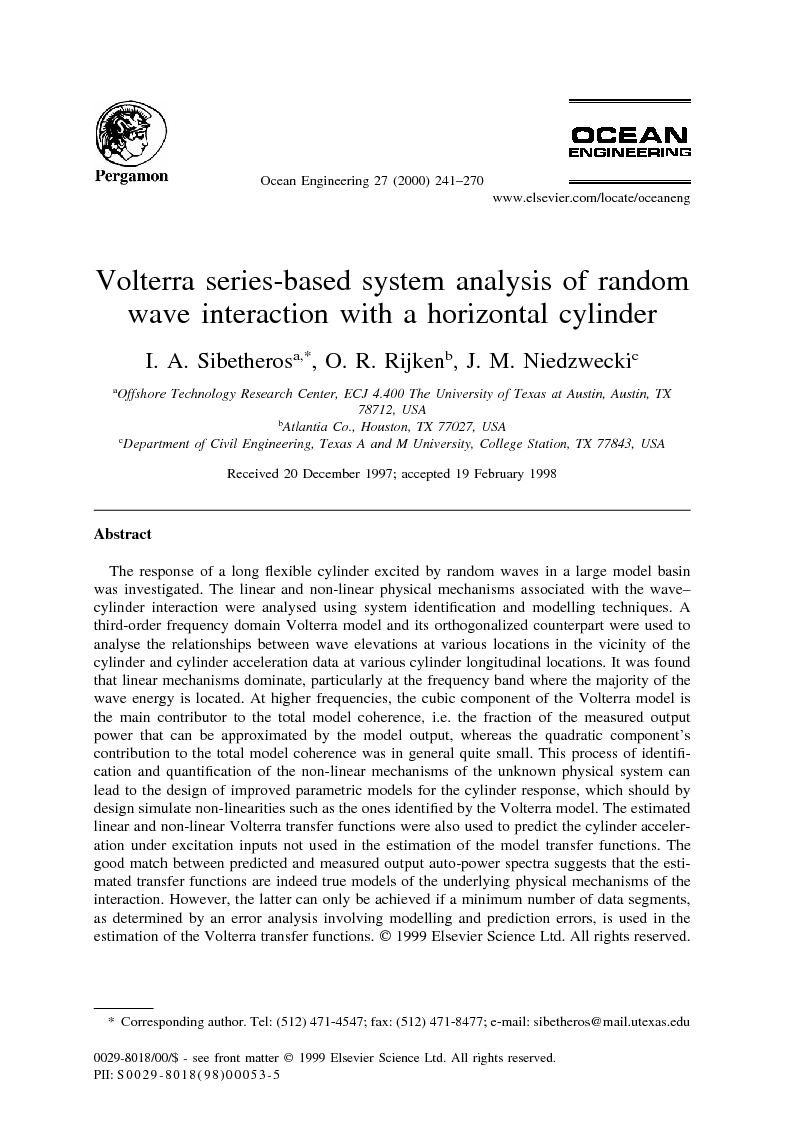 The response of a long flexible cylinder excited by random waves in a large model basin was investigated. The linear and non-linear physical mechanisms associated with the wave–cylinder interaction were analysed using system identification and modelling techniques. A third-order frequency domain Volterra model and its orthogonalized counterpart were used to analyse the relationships between wave elevations at various locations in the vicinity of the cylinder and cylinder acceleration data at various cylinder longitudinal locations. It was found that linear mechanisms dominate, particularly at the frequency band where the majority of the wave energy is located. At higher frequencies, the cubic component of the Volterra model is the main contributor to the total model coherence, i.e. the fraction of the measured output power that can be approximated by the model output, whereas the quadratic component's contribution to the total model coherence was in general quite small. This process of identification and quantification of the non-linear mechanisms of the unknown physical system can lead to the design of improved parametric models for the cylinder response, which should by design simulate non-linearities such as the ones identified by the Volterra model. The estimated linear and non-linear Volterra transfer functions were also used to predict the cylinder acceleration under excitation inputs not used in the estimation of the model transfer functions. The good match between predicted and measured output auto-power spectra suggests that the estimated transfer functions are indeed true models of the underlying physical mechanisms of the interaction. However, the latter can only be achieved if a minimum number of data segments, as determined by an error analysis involving modelling and prediction errors, is used in the estimation of the Volterra transfer functions.

In many fluid–structure interaction cases linear and non-linear mechanisms control the response of the structure to a given input. The non-linear mechanisms, in particular, may generate new spectral components in the output which are not present or are not significant in the input, at frequencies which can be quite low or quite high relative to the input spectrum. They may also amplify spectral components in the output which are also linearly excited by the input, through quadratic, cubic, or higher-order interactions of input spectral components at frequencies which satisfy a specific selection rule. It is thus apparent that both the identification and quantification of these non-linear mechanisms are critical to the development of accurate response prediction models. The most widely used models in offshore engineering to analyse the response of a structure exposed to wave loading are primarily parametric models (Sarpkaya and Isaacson, 1981). A linear or non-linear model structure is assumed, with given or unknown structural parameters, whereas the exciting wave force is modelled either by Morison's equation for small size members relative to the characteristic wavelength, or by the diffraction theory for larger members. It is well known that selecting the force transfer parameters for Morison's equation under different conditions is difficult. Furthermore, the computation of potential forces for larger size members is not an easy task when the effects of waterline, body motion, velocity head, and second-order potential are taken into account (Faltinsen, 1990Newman, 1995). In addition to the difficulty of determining the proper structural and force parameter values, which are usually deduced from experimental data, parametric models also exhibit a serious intrinsic limitation in that their mathematical formulation, including the assumptions regarding the change in position or geometry of the structure, predetermines the type and magnitude of the non-linear effects they can simulate in the structural response. For example, a simple model for a vertical cylinder exposed to an irregular wave can be a single-degree-of-freedom structural model with a Morison's equation excitation force. Paik (1994) showed that, for such a response model, the type of the non-linear low frequency response generated depended on which position, i.e. original or displaced cylinder position, the wave kinematics were calculated. Specifically, in the original position calculation, the non-linear response was caused by cubic combination of the wave components, whereas in the displaced position calculation the non-linear response was mainly due to quadratic combination of the input wave frequency. Non-linear system modelling techniques have also been used for structural response analysis, with the focus mainly on the non-linear restoring force analysis. Kim et al. (1989) used a second-order frequency domain Volterra model for the analysis of the surge response of a tension leg platform. Spanos and Lu (1995) decomposed a parametric response model, that incorporated the non-linearity induced by the structure–environment interaction into a number of parallel no-memory non-linear systems, each followed by a finite-memory linear system. The linear transfer functions of the linear subsystems were determined using cross-spectrum methods. In both studies, however, a priori knowledge of the non-linearities exhibited by the physical system led to the selection of the appropriate model structure and expression for the excitation force. The non-linear system identification analysis, as contrasted to the aforementioned non-linear system modelling analysis, applies to the fluid–structure interaction cases, in which the source and nature of the non-linear phenomena affecting the response of the structure may not be clearly identifiable. For such cases, the Volterra series approach to the non-linear system theory offers a very powerful tool for the identification and quantification of unknown non-linear mechanisms. In this study, a third-order Volterra model valid for general, non-Gaussian and Gaussian, stationary random input (Im and Powers, 1996) was applied to the analysis of the response of a horizontal cylinder exposed to a random wave. Specifically, the unknown input–output linear and/or non-linear relationships between experimental data of wave elevations and cylinder accelerations at various spanwise locations were investigated. The “orthogonal” Volterra-like model, which is an orthogonalized version of the original Volterra model, was used to estimate orthogonal coherence spectra. The latter quantify the goodness of the linear, quadratic and cubic components of the model without the presence of “interference” terms. This system identification approach is not a “black-box” approach, in that the identified non-linear relationships are not an artifact of the technique, but they are true manifestations of actual physical mechanisms. This paper begins with a presentation of the theoretical formulation of the third-order frequency domain Volterra model and its orthogonalized version are presented, following extensively by Im and Powers (1996) presentation of the same model. A major objective of this study is to investigate the non-linear system approach in the analysis of the wave–cylinder interaction, from an experiment specifically designed to address issues regarding the length of the time series records. Third-order Volterra models are shown to be appropriate and are used to quantify the relationships between the wave elevation measurements at two locations near and parallel to the cylinder axis; the wave elevation and cylinder acceleration measurements along the center line; and cylinder acceleration measurements at two longitudinal cylinder locations. Orthogonal coherence spectra are used to evaluate the contribution, expressed as fraction of the measured output auto-power spectrum, of each of the linear, quadratic, and cubic Volterra model terms to the model output. The performance of the Volterra model as a predictive tool is also evaluated by using the estimated Volterra kernels and a testing input–output data set, different than the ones used in the estimation of the transfer functions. The issue of the data length requirement is addressed through an error analysis involving modelling and prediction errors as functions of the number of segments used in the estimation of the Volterra transfer functions.

The system analysis of the wave cylinder interaction provided significant insight regarding the wave–structure interaction mechanisms. It appears that linear models could be adequately representing the input–output relationships in all three systems, particularly over the frequency band where the majority of the wave energy is located. Quadratic non-linearities do not appear to be significant and can, for all practical purposes, be ignored. The cubic components of the Volterra models on the other hand are the main contributors to the output modelling at high frequencies (system II), or at intermediate frequencies (system III). This spectral decomposition of the systems' outputs can be used in the design of parametric models for the cylinder response. For example, depending on the frequency band of interest, linear models may be adequate, or linear+cubic models may be needed. The Volterra models can also be used as predictive models, as demonstrated in Fig. 10, Fig. 14 and Fig. 18. For the particular random wave–cylinder interaction case, the estimated Volterra kernels can be used to predict the centerline cylinder acceleration under a random wave elevation input, or the cylinder acceleration at one location, when the cylinder acceleration at another longitudinal location is known. Frequency domain Volterra models are a powerful tool for the identification and modelling of non-linear relationships between general random input excitation and output response experimental or simulated data, which represent an unknown non-linear physical system. The identification of this non-linear system is accomplished by separating “orthogonal” contributions from the non-linear effects of different orders, without the presence of interference terms, that is “cross-talk” terms between the various linear and non-linear contributions. The latter is accomplished through the use of an “orthogonalized” version of the original Volterra model, and the orthogonal coherence spectra in particular. The modelling of the physical system on the other hand, that is the approximation of the existing output response data, and more importantly the prediction of system output response under different excitation inputs, is based on the original non-orthogonal Volterra model. This is due to the orthogonalization process itself, which ties the estimated orthogonal transfer functions to the orthogonalized excitation input vector. Therefore, the orthogonal transfer functions are specific to the estimation data set, and cannot be used for prediction purposes. There is, however, a critical issue that any experimentalist designing an experiment, which will involve the application of Volterra models in the data analysis, is faced with. That is, the data length requirements for the proper implementation of a third-order Volterra model. In this study, this issue was addressed through the use of concepts borrowed from the estimation theory. Simply put, the data length is considered adequate, if it leads to estimates of Volterra transfer functions, which are true models of the underlying linear and non-linear mechanisms that generated the data, and not just curve-fits of the data sets used in estimating them. By calculating modelling and prediction errors as functions of the number of either 32-point or 64-point segments used in the estimation of the transfer functions, it was found that at least 800 (approximately) 32-point or 1200 (approximately) 64-point segments are needed for the proper estimation of the transfer functions. These numbers, albeit specific to the systems and the data sets analysed in this study, are indicative of the data length requirements for the implementation of a third-order Volterra model in the frequency domain.