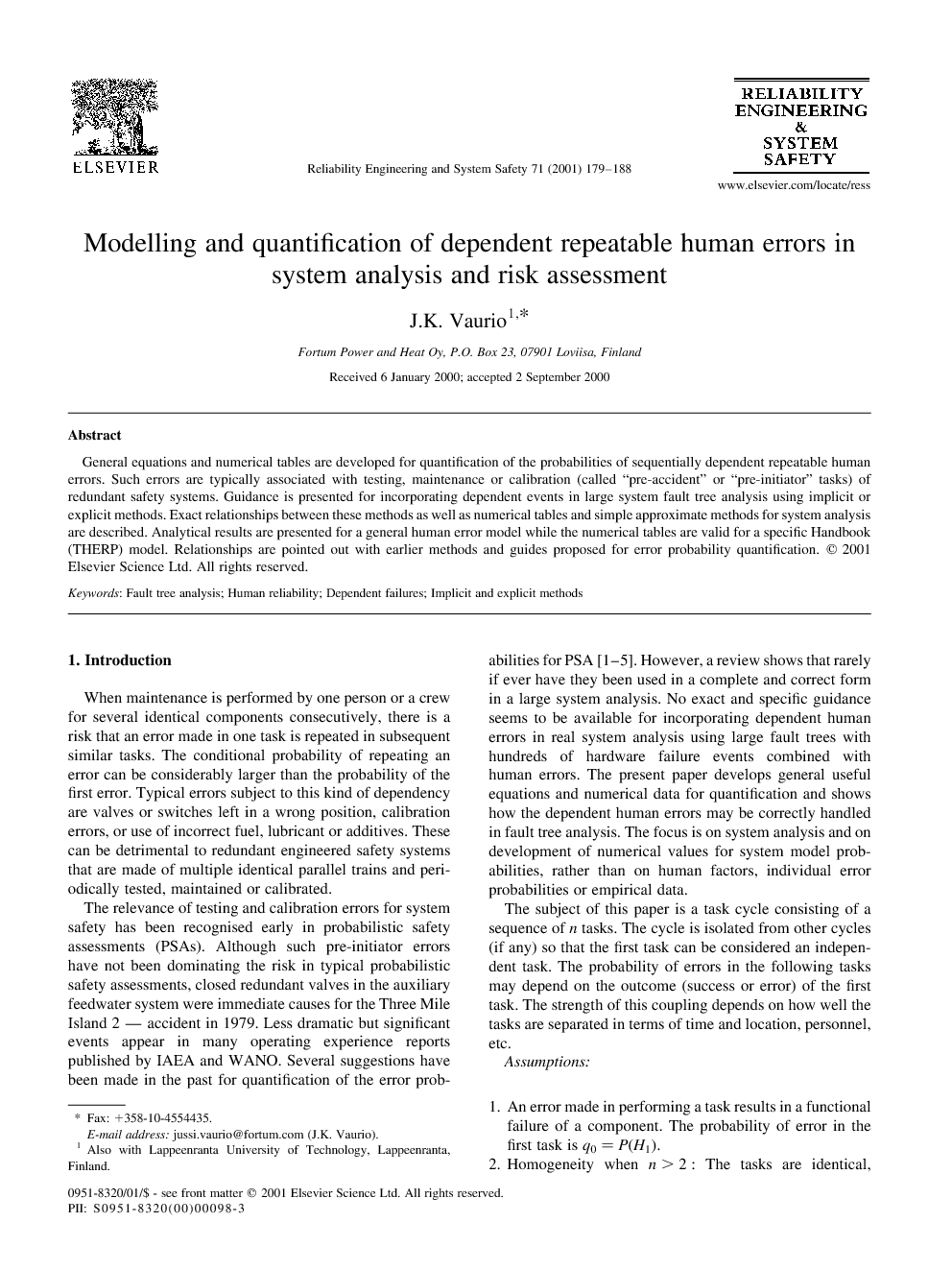 General equations and numerical tables are developed for quantification of the probabilities of sequentially dependent repeatable human errors. Such errors are typically associated with testing, maintenance or calibration (called “pre-accident” or “pre-initiator” tasks) of redundant safety systems. Guidance is presented for incorporating dependent events in large system fault tree analysis using implicit or explicit methods. Exact relationships between these methods as well as numerical tables and simple approximate methods for system analysis are described. Analytical results are presented for a general human error model while the numerical tables are valid for a specific Handbook (THERP) model. Relationships are pointed out with earlier methods and guides proposed for error probability quantification.

This paper reviewed and generalised some earlier models developed for quantification of dependent human error probabilities, and methods for analysing systems subject to such errors. General exact equations were developed for the probabilities of combinations of human errors. Implicit and explicit methods were described for taking the errors correctly into account in large system reliability analysis. Analytical results were obtained for m-out-of-n:G system unavailabilities and used for developing simplified approximate methods for system analysis. The explicit method leads to larger fault tree models than the implicit method, and more complex calculations of the event probabilities. On the other hand, most computer codes can automatically handle large explicit models, and the rare-event approximation is somewhat more accurate in the explicit method than in the implicit method. Numerical tables were developed for the joint probabilities of the implicit method, and for the probabilities of the virtual events of the explicit method. The numbers clearly point out the non-identity of components with respect to human errors. The tables make correct system quantification feasible under the Handbook case. The main area of applications in mind for the results has been the unavailability analysis of redundant standby safety systems consisting of n parallel trains that are periodically tested, calibrated or maintained. When one work cycle is short compared to the interval of cycles, a repeated error can remain undetected for a whole interval. Then the probabilities obtained here are relevant input to system models. The current formalism applies also for calculating the probability of a plant transient (initiating event) if such is caused by repeated operator errors. If the tasks of a maintenance cycle are staggered over an extended period, it is usually appropriate to consider the tasks mutually independent. If not, one needs to develop the formalism further to account for partial overlapping of the residence times of the errors. The transformation equations between the implicit and explicit model event probabilities ( and and Appendix A) are actually general, valid for any kinds of mutually dependent events Hi in system models, not only for human errors. Future efforts are directed to analysis of common cause (hardware) failures and standby systems in general. Psychological considerations and some observations [3, Appendix B] indicate that some errors might promote errors progressively, q1<q2<q3⋯, while learning could be possible for some error types, leading to q1>q2>q3, etc. The sequential failure model [2] would be a natural candidate for modelling such sequences. The Handbook equations could also be modified by making K dependent on the number of preceding errors, or using a recursive form qi+1=(1+Kqi)/(1+K). More empirical evidence and model fitting would be needed to validate such assumptions as well as confirm realistic values for the parameter x measuring the power of success. Nevertheless, much of the analytical work provided in this paper could be applied immediately with such models and results.