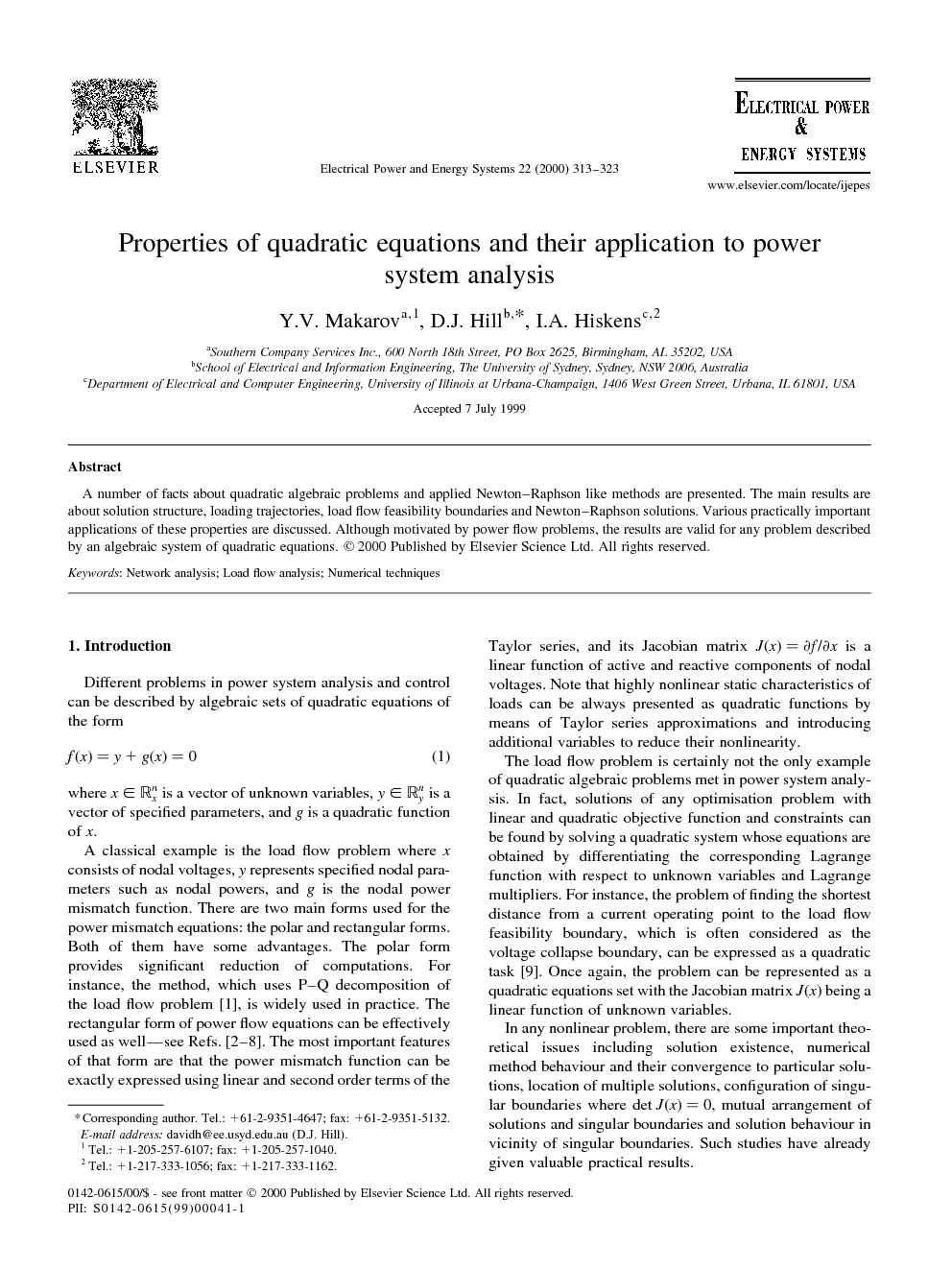 A number of facts about quadratic algebraic problems and applied Newton–Raphson like methods are presented. The main results are about solution structure, loading trajectories, load flow feasibility boundaries and Newton–Raphson solutions. Various practically important applications of these properties are discussed. Although motivated by power flow problems, the results are valid for any problem described by an algebraic system of quadratic equations.

Different problems in power system analysis and control can be described by algebraic sets of quadratic equations of the form equation(1) f(x)=y+g(x)=0 where is a vector of unknown variables, is a vector of specified parameters, and g is a quadratic function of x. A classical example is the load flow problem where x consists of nodal voltages, y represents specified nodal parameters such as nodal powers, and g is the nodal power mismatch function. There are two main forms used for the power mismatch equations: the polar and rectangular forms. Both of them have some advantages. The polar form provides significant reduction of computations. For instance, the method, which uses P–Q decomposition of the load flow problem [1], is widely used in practice. The rectangular form of power flow equations can be effectively used as well—see [2], [3], [4], [5], [6], [7] and [8]. The most important features of that form are that the power mismatch function can be exactly expressed using linear and second order terms of the Taylor series, and its Jacobian matrix J(x)=∂f/∂x is a linear function of active and reactive components of nodal voltages. Note that highly nonlinear static characteristics of loads can be always presented as quadratic functions by means of Taylor series approximations and introducing additional variables to reduce their nonlinearity. The load flow problem is certainly not the only example of quadratic algebraic problems met in power system analysis. In fact, solutions of any optimisation problem with linear and quadratic objective function and constraints can be found by solving a quadratic system whose equations are obtained by differentiating the corresponding Lagrange function with respect to unknown variables and Lagrange multipliers. For instance, the problem of finding the shortest distance from a current operating point to the load flow feasibility boundary, which is often considered as the voltage collapse boundary, can be expressed as a quadratic task [9]. Once again, the problem can be represented as a quadratic equations set with the Jacobian matrix J(x) being a linear function of unknown variables. In any nonlinear problem, there are some important theoretical issues including solution existence, numerical method behaviour and their convergence to particular solutions, location of multiple solutions, configuration of singular boundaries where mutual arrangement of solutions and singular boundaries and solution behaviour in vicinity of singular boundaries. Such studies have already given valuable practical results. Studies of the multiple solutions of the load flow problem play a role in determining proximity to voltage collapse [5] and [10]. In order to obtain multiple load flow solutions, Tamura et al. used a set of quadratic load flow equations and the Newton–Raphson (NR) optimal multiplier method [7]. Iba et al. used Tamura's approach and some newly discovered convergence peculiarities of the NR method to find a pair of closest multiple solutions [8]. It is observed from experimental results [8] that if a point x comes close to a line connecting a couple of distinct solutions, a further NR iterative process in rectangular form goes along this line. The next observation in Ref. [8] is that, in the vicinity of a singular point, the NR method with the optimal multiplier gives a trajectory which tends to the straight line connecting a pair of closely located but distinct solutions. These features are effectively used in Ref. [8] to locate multiple load flow solutions. The authors asked for a theoretical background of these experimentally discovered properties. The present paper is written to further explore some fundamental properties of quadratic algebraic problems and use them in a number of practical applications. The main results establish the following properties: • A variation of x along a straight line through a pair of distinct solutions of the problem f(x)=0 results in variation of the mismatch vector f(x) along a straight line in • There is a singular point in the middle of a straight line connecting a pair of distinct solutions x1, x2 in [5], [6] and [11]. • A vector co-linear to a straight line connecting a pair of distinct solutions in nullifies the Jacobian matrix J(x)=∂f/∂x at the centre point of the line [5] and [6]. • If x belongs to a straight line connecting a pair of distinct solutions, the NR iterative process goes along that line. • The maximal number of solutions on any straight line in is two. • Along a straight line through two distinct solutions x1, x2, the problem can be reduced to a single scalar quadratic equation which locates these solutions. • If a loading process y(β) in reaches a singular point the corresponding trajectory of x(β) in tends to the right eigenvector nullifying J(x) at the singular point (except in some special cases). • At any singular point, there are two merging solutions (except in some special cases). • For any two points x1≠x2 and the Jacobian matrix the number and location of singularities of the quadratic problem f(x)=0 on the straight line through x1, x2 is defined by real eigenvalues of the matrix J−1(x1)J(x2). Some of the results are already known—see references above. They are assembled here with new results and clearer explanations. Earlier versions of the results presented here are given in [2], [12] and [13].

In this paper, we have carefully studied the properties of quadratic equations with respect to solution structure, loading trajectories, load flow feasibility boundaries and Newton–Raphson solutions. These results were shown to clarify techniques used in power system analysis. This is explored for finding multiple solutions and bifurcation curves.