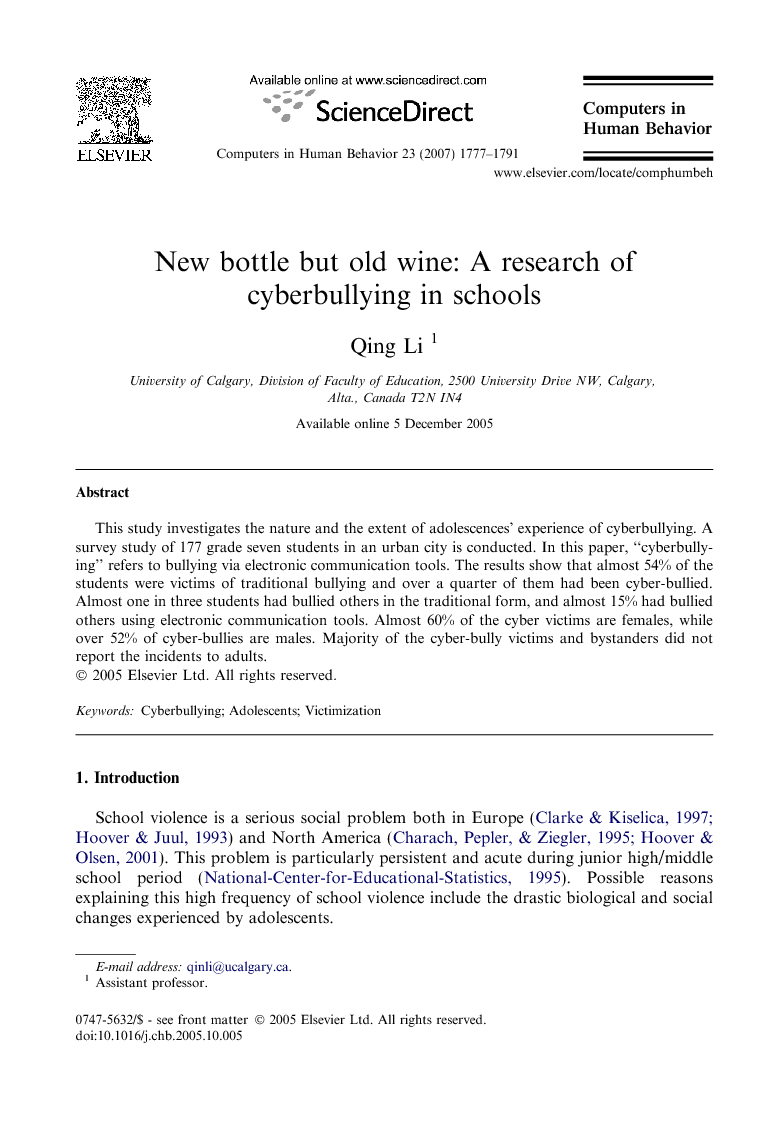 Abstract This study investigates the nature and the extent of adolescences’ experience of cyberbullying. A survey study of 177 grade seven students in an urban city is conducted. In this paper, “cyberbullying” refers to bullying via electronic communication tools. The results show that almost 54% of the students were victims of traditional bullying and over a quarter of them had been cyber-bullied. Almost one in three students had bullied others in the traditional form, and almost 15% had bullied others using electronic communication tools. Almost 60% of the cyber victims are females, while over 52% of cyber-bullies are males. Majority of the cyber-bully victims and bystanders did not report the incidents to adults.

School violence is a serious social problem both in Europe (Clarke and Kiselica, 1997 and Hoover and Juul, 1993) and North America (Charach et al., 1995 and Hoover and Olsen, 2001). This problem is particularly persistent and acute during junior high/middle school period (National-Center-for-Educational-Statistics, 1995). Possible reasons explaining this high frequency of school violence include the drastic biological and social changes experienced by adolescents. [A]dolescence is a period of abrupt biological and social change. Specifically, the rapid body changes associated with the onset of adolescence and changes from primary to secondary school initiate dramatic changes in youngster’s peer group composition and status. Changes in peer group availability, individuals’ status within groups, and peer support confront youngsters as they are entering new, larger, and typically impersonal secondary schools. One way in which peer status is achieved in these sorts of environments, especially by boys, is through the selective use of aggression and other agonistic strategies. (Pellegrini & Bartini, 2000) Much of school violence, particularly during adolescence, involves students bullying their peers (Boulton, 1999). According to Hoover and Olsen, “up to 15% of students in American schools are frequently or severely harassed by their peers. … Only a slim majority of 4th through 12th graders … (55.2%) reported neither having been picked on nor picking on others” (Hoover & Olsen, 2001). Further, bully-victim cycles are found where individuals are both bullies and victims (Ma, 2001, Pellegrini and Bartini, 2000, Schwartz et al., 1993 and Schwartz et al., 1997). More importantly, it is reported that in many school-shooting cases, bullying played a major role (Dedman, 2001).

This study contributes to the extant literature on bullying in several conceptual areas. First, cyberbullying is a bullying problem occurring in a new territory. Few research studies have examined the bullying issue in this new context. The astonishing high percent of adolescents who had experienced cyberbully tactics observed in this study suggests that cyberbullying is becoming an increasingly critical problem for schools and the whole society. Second, in this paper, bullying and cyberbullying are examined at “a point where it had seldom been studied. Extant studies, for the most part, studied primary school children. The early adolescent period merits attention because it is a period, labeled a ‘brutalizing period’, where disruptions in social networks afford opportunities for peer victimization and aggress to establish peer status” (Pellegrini & Bartini, 2000). Consistent with this, the result of this study shows a high percent of the students are involved in bullying or cyberbullying. Third, bullying, cyberbullying, and victimization are explored in this study by considering them as an integrated whole. Though some studies (Ma, 2001 and Pellegrini and Bartini, 2000) have examined bully-victim cycles, conceptually and most importantly, this work, established for the first time, the relationships amongst bullying, cyberbullying, and victimization. The close tie amongst bullies, cyber-bullies, and their victims found in this study underscores the importance of holistic approaches for the research and possible intervention programs related to cyberbully issues. Fourth, the vast majority of adolescents choosing to be quiet bystanders further stress the importance of systematic education of safety strategies from early age. This education should be a joint endeavor of schools, families, communities, and the whole society. It supports the idea that our concern of the bully and cyberbully issue “must be at many levels, not only for the individuals themselves, and their families, but also society at large” (Morrison, 2002, p. 3). Like any research study, this study has some limitations. For example, the survey question which intended to discover frequency of student using computers did not consider that the majority of students in the schools have easy access to computers in this urban city. Simply categorizing it into rare, 1–3 times per month, and over 4 times a month does not appropriately reflect the current trend of access in educational technology. Further, the data were collected from an urban city; we need to be cautious when generalizing the findings to other regions. Note. An earlier version of this study based on fewer analyses was presented at the Annual Meeting of the American Educational Research Association, Montreal, 2005 ( Li, 2005).