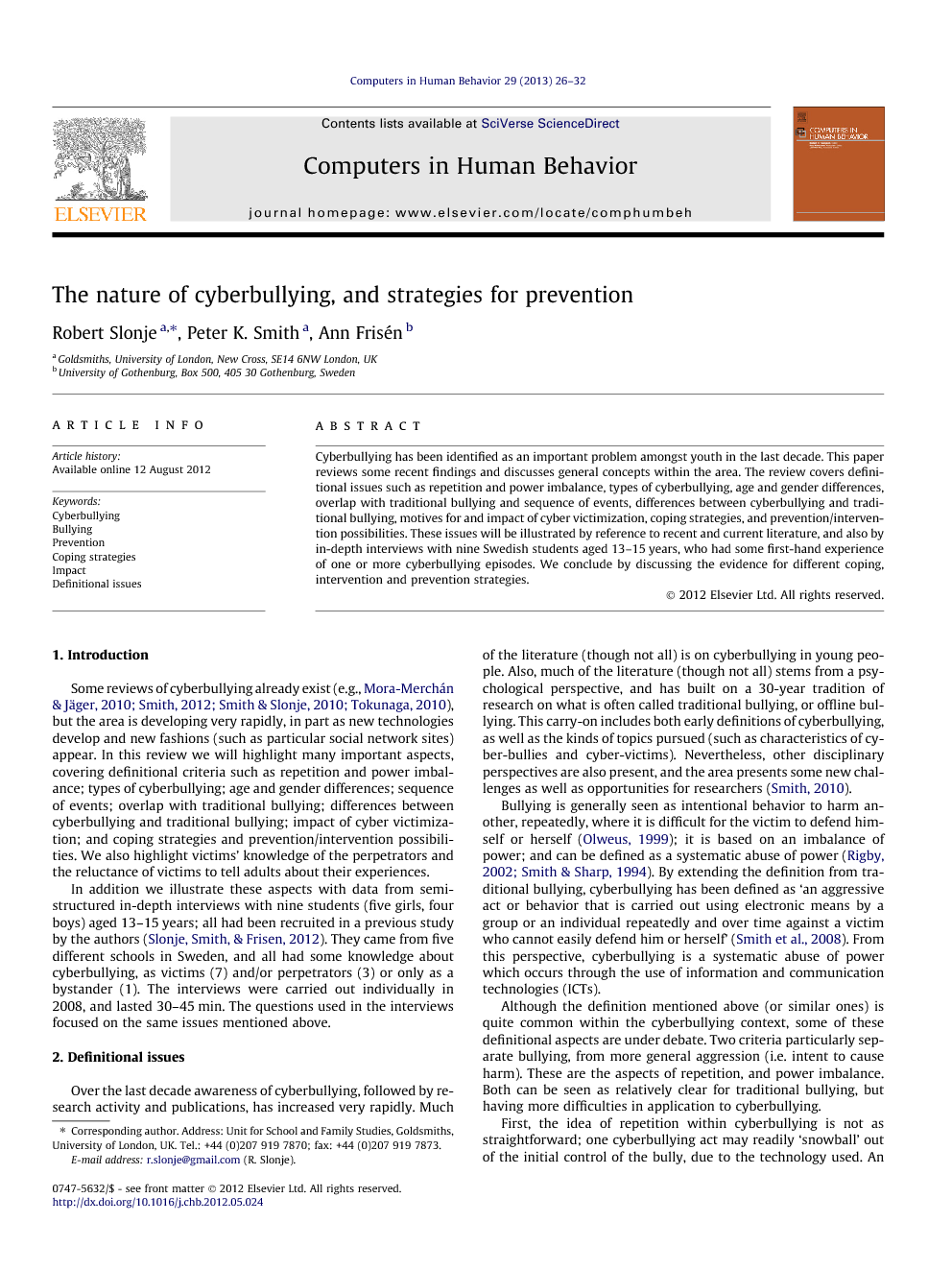 Cyberbullying has been identified as an important problem amongst youth in the last decade. This paper reviews some recent findings and discusses general concepts within the area. The review covers definitional issues such as repetition and power imbalance, types of cyberbullying, age and gender differences, overlap with traditional bullying and sequence of events, differences between cyberbullying and traditional bullying, motives for and impact of cyber victimization, coping strategies, and prevention/intervention possibilities. These issues will be illustrated by reference to recent and current literature, and also by in-depth interviews with nine Swedish students aged 13–15 years, who had some first-hand experience of one or more cyberbullying episodes. We conclude by discussing the evidence for different coping, intervention and prevention strategies.

Some reviews of cyberbullying already exist (e.g., Mora-Merchán and Jäger, 2010, Smith, 2012, Smith and Slonje, 2010 and Tokunaga, 2010), but the area is developing very rapidly, in part as new technologies develop and new fashions (such as particular social network sites) appear. In this review we will highlight many important aspects, covering definitional criteria such as repetition and power imbalance; types of cyberbullying; age and gender differences; sequence of events; overlap with traditional bullying; differences between cyberbullying and traditional bullying; impact of cyber victimization; and coping strategies and prevention/intervention possibilities. We also highlight victims’ knowledge of the perpetrators and the reluctance of victims to tell adults about their experiences. In addition we illustrate these aspects with data from semi-structured in-depth interviews with nine students (five girls, four boys) aged 13–15 years; all had been recruited in a previous study by the authors (Slonje, Smith, & Frisen, 2012). They came from five different schools in Sweden, and all had some knowledge about cyberbullying, as victims (7) and/or perpetrators (3) or only as a bystander (1). The interviews were carried out individually in 2008, and lasted 30–45 min. The questions used in the interviews focused on the same issues mentioned above.

Although cyberbullying research is vigorous and has already achieved a lot, it faces some notable challenges. In particular, definitional and measurement issues need to be more fully resolved. Issues that need to be addressed more clearly include when the incident should be regarded as cyberbullying (with repetition) or cyber-aggression (a one off act); and the notion of power imbalance. A more standardized approach to measurement in this area is now urgently needed. A complication here is that the rapid historical changes in ICTs means that researchers need to continually modify instruments and be aware of new developments. These developments may have an influence on a variety of aspects such as gender and age differences or distribution processes of the bullying material. The field also lacks an overall theoretical approach, although this can be said to be true of the field of bullying research generally (Monks et al., 2009). The notion of ostracism could be one helpful approach; that is, how the group acts towards an individual whom they perceive has broken the norm of the group, which then leads the other group members to use aversive behaviors (including bullying) make the individual fall back into the group norm. If the target does not change his/hers behavior, then exclusion from the group may occur. This threat of exclusion has been explored most for traditional bullying (Dixon, 2011), but deserves possible consideration in the cyberbullying area. However there are also many opportunities in cyberbullying research (Smith, 2012). One is a broader disciplinary basis of research than is found in traditional bullying, including besides psychology and education, strong input from sociology, media studies, public health, law, and other social sciences; and a greater combination of qualitative and quantitative approaches perhaps following from this disciplinary breadth. There is the potential to make more use of young people themselves, not only as participants in focus groups, but also by involving them as researchers themselves, in the design of the study, and gathering data (Spears et al., 2009). The nature of cyberbullying phenomena also inevitably directs us to broader contextual and developmental aspects. Contextually, we know that (even for school-aged children), most cyberbullying is not experienced in school; the perpetration, the witnessing, and the reception of cyberbullying acts will often be in homes, clubs, outside areas. Developmentally, cyberbullying may show more age permeability than traditional bullying; traditional bullying appears to vary substantially between the school setting and the workplace setting; but cyberbullying occurs in cyberspace, whatever age group is taking part. We need to explore and contrast in more detail the motives for cyberbullying, compared to traditional bullying. There also appear to be important national or cultural differences in cyberbullying which call for explanation (Genta et al., 2012). If we face the challenges and build on the opportunities that the field offers us, this will be an important and exciting program of research that may help us minimize the abuse of new technologies and ensure that cyberspace is primarily a happy and satisfying arena for human relationships.