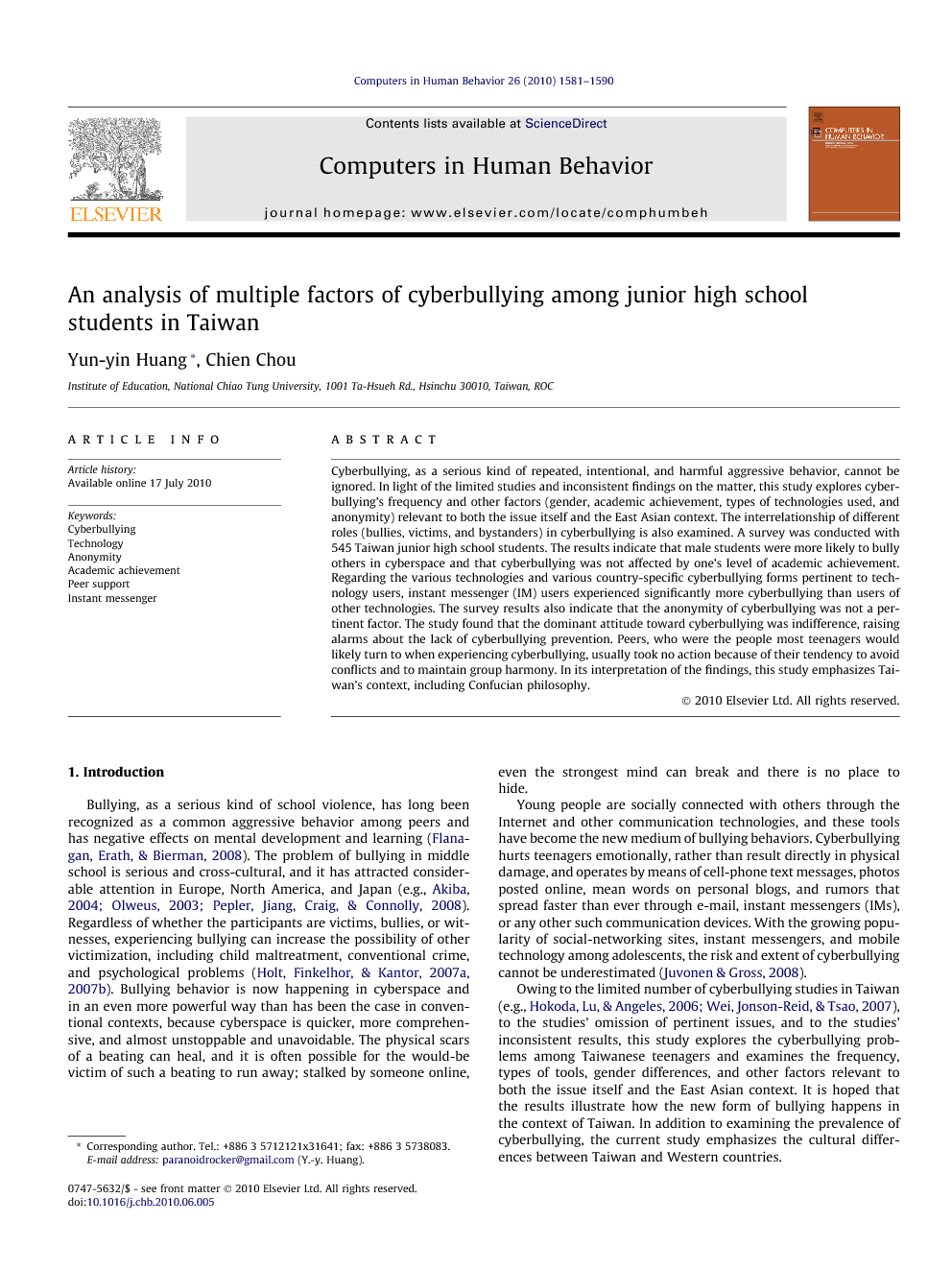 Cyberbullying, as a serious kind of repeated, intentional, and harmful aggressive behavior, cannot be ignored. In light of the limited studies and inconsistent findings on the matter, this study explores cyberbullying’s frequency and other factors (gender, academic achievement, types of technologies used, and anonymity) relevant to both the issue itself and the East Asian context. The interrelationship of different roles (bullies, victims, and bystanders) in cyberbullying is also examined. A survey was conducted with 545 Taiwan junior high school students. The results indicate that male students were more likely to bully others in cyberspace and that cyberbullying was not affected by one’s level of academic achievement. Regarding the various technologies and various country-specific cyberbullying forms pertinent to technology users, instant messenger (IM) users experienced significantly more cyberbullying than users of other technologies. The survey results also indicate that the anonymity of cyberbullying was not a pertinent factor. The study found that the dominant attitude toward cyberbullying was indifference, raising alarms about the lack of cyberbullying prevention. Peers, who were the people most teenagers would likely turn to when experiencing cyberbullying, usually took no action because of their tendency to avoid conflicts and to maintain group harmony. In its interpretation of the findings, this study emphasizes Taiwan’s context, including Confucian philosophy.

Bullying, as a serious kind of school violence, has long been recognized as a common aggressive behavior among peers and has negative effects on mental development and learning (Flanagan, Erath, & Bierman, 2008). The problem of bullying in middle school is serious and cross-cultural, and it has attracted considerable attention in Europe, North America, and Japan (e.g., Akiba, 2004, Olweus, 2003 and Pepler et al., 2008). Regardless of whether the participants are victims, bullies, or witnesses, experiencing bullying can increase the possibility of other victimization, including child maltreatment, conventional crime, and psychological problems (Holt et al., 2007a and Holt et al., 2007b). Bullying behavior is now happening in cyberspace and in an even more powerful way than has been the case in conventional contexts, because cyberspace is quicker, more comprehensive, and almost unstoppable and unavoidable. The physical scars of a beating can heal, and it is often possible for the would-be victim of such a beating to run away; stalked by someone online, even the strongest mind can break and there is no place to hide. Young people are socially connected with others through the Internet and other communication technologies, and these tools have become the new medium of bullying behaviors. Cyberbullying hurts teenagers emotionally, rather than result directly in physical damage, and operates by means of cell-phone text messages, photos posted online, mean words on personal blogs, and rumors that spread faster than ever through e-mail, instant messengers (IMs), or any other such communication devices. With the growing popularity of social-networking sites, instant messengers, and mobile technology among adolescents, the risk and extent of cyberbullying cannot be underestimated (Juvonen & Gross, 2008). Owing to the limited number of cyberbullying studies in Taiwan (e.g., Hokoda et al., 2006 and Wei et al., 2007), to the studies’ omission of pertinent issues, and to the studies’ inconsistent results, this study explores the cyberbullying problems among Taiwanese teenagers and examines the frequency, types of tools, gender differences, and other factors relevant to both the issue itself and the East Asian context. It is hoped that the results illustrate how the new form of bullying happens in the context of Taiwan. In addition to examining the prevalence of cyberbullying, the current study emphasizes the cultural differences between Taiwan and Western countries.