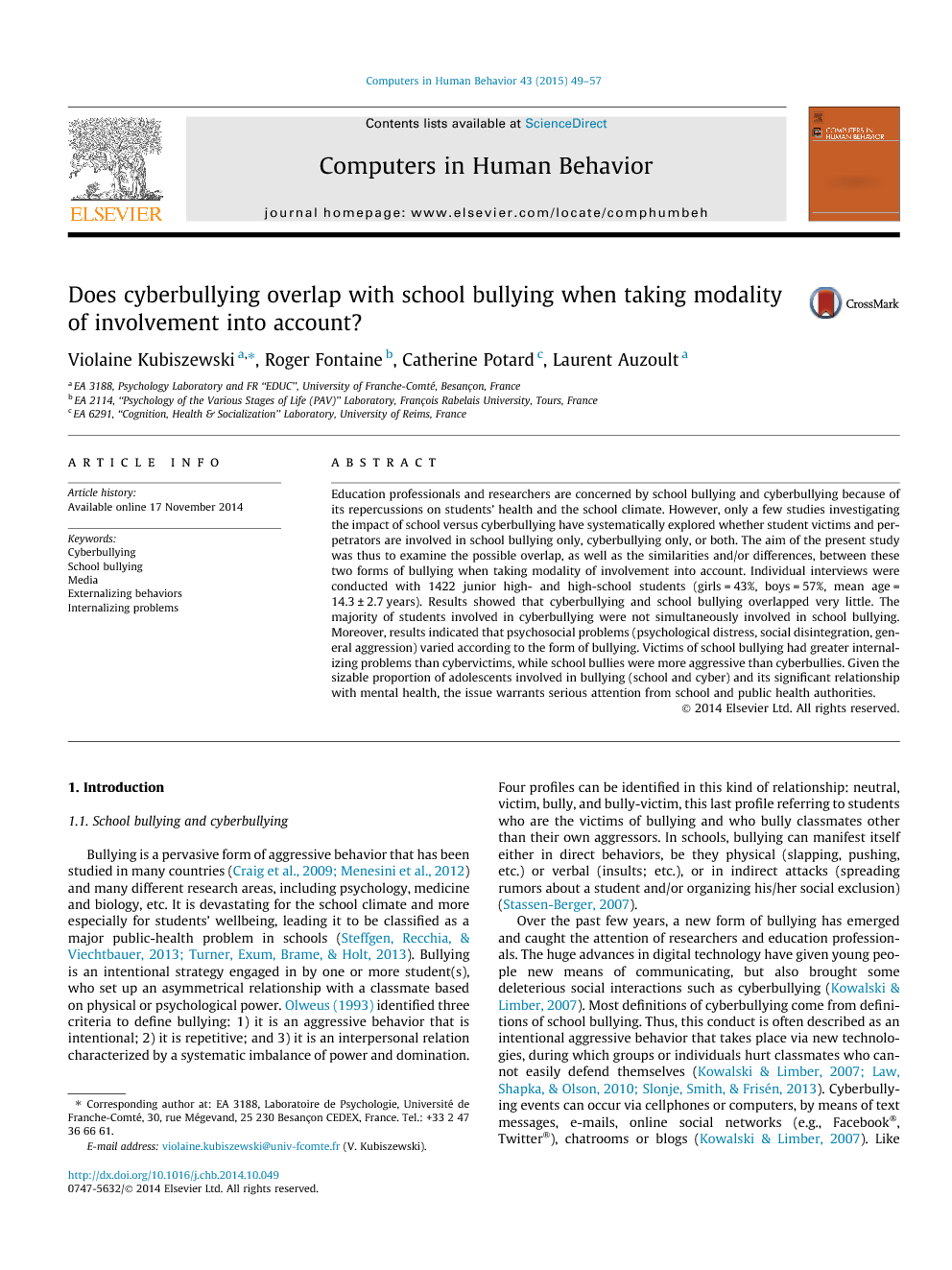 Education professionals and researchers are concerned by school bullying and cyberbullying because of its repercussions on students’ health and the school climate. However, only a few studies investigating the impact of school versus cyberbullying have systematically explored whether student victims and perpetrators are involved in school bullying only, cyberbullying only, or both. The aim of the present study was thus to examine the possible overlap, as well as the similarities and/or differences, between these two forms of bullying when taking modality of involvement into account. Individual interviews were conducted with 1422 junior high- and high-school students (girls = 43%, boys = 57%, mean age = 14.3 ± 2.7 years). Results showed that cyberbullying and school bullying overlapped very little. The majority of students involved in cyberbullying were not simultaneously involved in school bullying. Moreover, results indicated that psychosocial problems (psychological distress, social disintegration, general aggression) varied according to the form of bullying. Victims of school bullying had greater internalizing problems than cybervictims, while school bullies were more aggressive than cyberbullies. Given the sizable proportion of adolescents involved in bullying (school and cyber) and its significant relationship with mental health, the issue warrants serious attention from school and public health authorities.

The results of this study lead to the conclusion that cyberbullying is a form of aggressive behavior that is quite distinct from school bullying. These two forms were differentiated both from the perspective of prevalence and from the perspective of the psychosocial problems associated with the different profiles. In other words, not only were different students involved in each of these forms of bullying, but they also had distinct characteristics. These conclusions could contribute to the design of preventive interventions in schools. Given the difference between school and cyberbullying, it is difficult to conceive that actions intended to reduce school bullying could be as efficient in preventing cyberbullying. Because of the undeniable presence of cyberbullying and the number of young people concerned, students, together with their parents and teachers, should be regularly informed of the existence of this practice and any changes it undergoes. Having the means to protect oneself and to deal with school or cyberbullying are other aspects that need to be tackled, given the psychosocial problems that can be generated. Despite the differences between these two kinds of bullying, they need to be combatted simultaneously, through a combination of targeted actions.