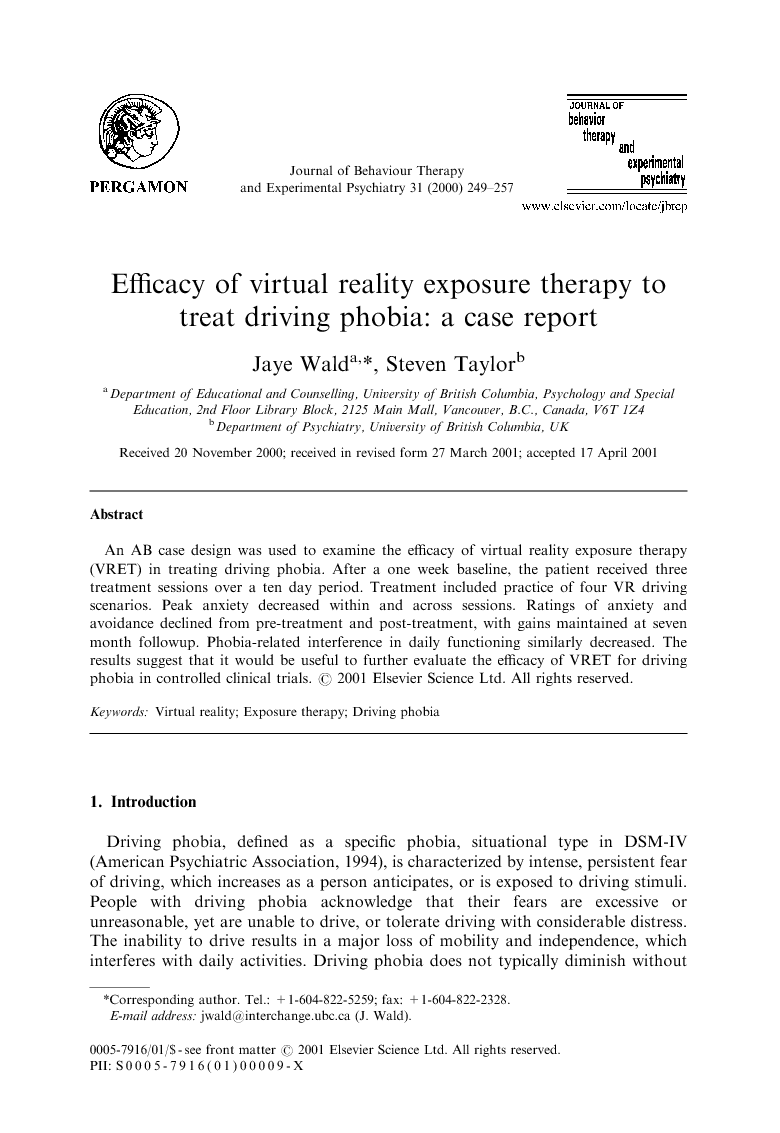 An AB case design was used to examine the efficacy of virtual reality exposure therapy (VRET) in treating driving phobia. After a one week baseline, the patient received three treatment sessions over a ten day period. Treatment included practice of four VR driving scenarios. Peak anxiety decreased within and across sessions. Ratings of anxiety and avoidance declined from pre-treatment and post-treatment, with gains maintained at seven month followup. Phobia-related interference in daily functioning similarly decreased. The results suggest that it would be useful to further evaluate the efficacy of VRET for driving phobia in controlled clinical trials.

Driving phobia, defined as a specific phobia, situational type in DSM-IV (American Psychiatric Association, 1994), is characterized by intense, persistent fear of driving, which increases as a person anticipates, or is exposed to driving stimuli. People with driving phobia acknowledge that their fears are excessive or unreasonable, yet are unable to drive, or tolerate driving with considerable distress. The inability to drive results in a major loss of mobility and independence, which interferes with daily activities. Driving phobia does not typically diminish without treatment and can become chronic (Mayou, Tyndel, & Bryant, 1997; Taylor & Deane, 1999). This phobia typically occurs in young to middle adult females (Taylor & Deane (1999) and Taylor & Deane, 1999 (2000)). The onset of driving fear is typically related to motor vehicle accident involvement, panic disorder, or agoraphobia (Taylor & Deane (1999) and Taylor & Deane, 1999 (2000)). There are few treatment outcome studies for driving phobia. Systematic desensitization has been found to be effective in the treatment of driving fears and avoidance in a number of case reports (e.g., Hayes, Hussian, Turner, Anderson, & Grubb, 1983; Quick, 1985). Other case reports (e.g., Hayes et al., 1983; Kline & Franklin, 1999; Lyons & Scotti, 1995) and an uncontrolled case series of 30 patients (Kuch, Swinson, & Kirby, 1985) suggest that driving phobia can be reduced by various combinations of in vivo and imaginal exposure. To date, no controlled treatment outcome studies for driving phobia have been published. Simulation or virtual reality (VR) technology has recently gained interest as an effective medium for administering exposure therapy (VRET: Rothbaum, Hodges, & Kooper, 1997). VR immerses users into a real-time computer-generated three-dimensional environment that simulates “real” experience. Users can interact with the virtual world through different sensory modalities including sight, sound, and touch. Immersion into a VR environment creates a sense of realism, as if the person was physically present in the virtual world. Several case reports and a small number of controlled studies have found VR to be effective for a variety of phobias, including acrophobia, spider phobia, flying phobia, and claustrophobia (e.g., Botella, Banos, Perpina, Villa, Alcaniz, & Rey, 1998; Carlin, Hoffman, & Weghorst, 1997; North, North, & Coble, 1996; Rothbaum et al., 1995; Rothbaum, Hodges, Smith, Lee, & Price, 2000). There have been no published case reports or controlled studies on the effectiveness of VRET to treat driving phobia. As a therapeutic modality for treating driving phobia, VRET has several potential advantages over in vivo exposure. In vivo exposure has a number of limitations and risks because exposure occurs on public roadways, where driving situations are often unpredictable, time-limited, and difficult to control. In vivo exposure also raises special safety and ethical concerns because highly anxious patients may be at an increased risk of making driving errors and being involved in a motor vehicle accident as a result of reduced attentional and information processing capacities. Furthermore, individuals with intense driving fears may refuse to participate in in vivo exposure or prematurely drop out of treatment. These problems can be minimized with VRET because treatment occurs in a clinician's office. VRET programs provide clinicians with complete control over the presentation and progression of feared driving situations. Exposure to virtual driving scenarios can be repeatedly practiced, graduated, or prolonged in a safe, non-threatening environment. Furthermore, the privacy of a clinician's office also eliminates the risk of potential public embarrassment that can occur with in vivo driving exposure. Ideally, as a patient becomes less anxious, VRET could serve as a bridge to in vivo driving, which is the ultimate goal of treating a driving phobia. The objective of this study was to examine the efficacy of VRET to treat an adult female with a DSM-IV driving phobia. It was hypothesized that VRET would reduce her driving-related anxiety and avoidance between pre-treatment and post-treatment assessments.