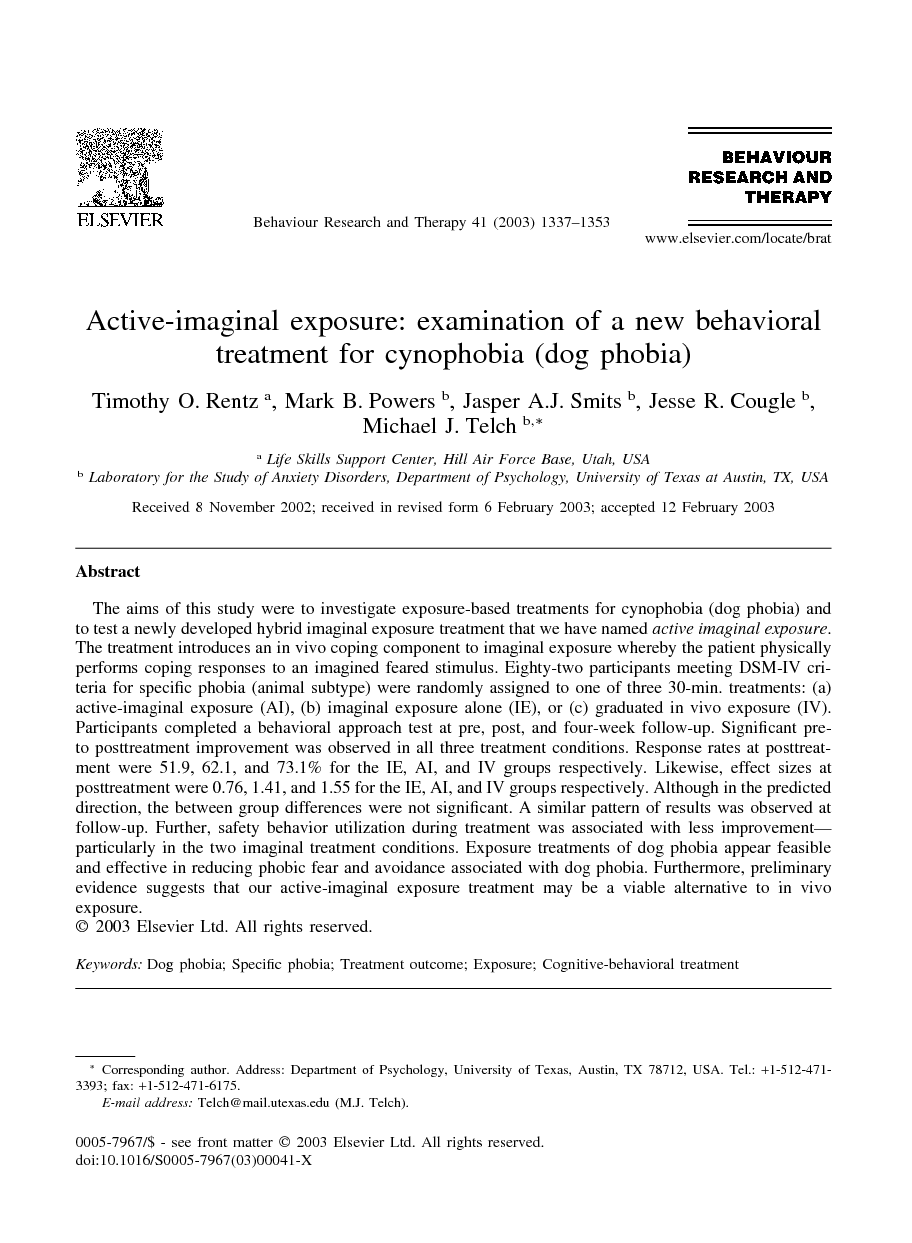 The aims of this study were to investigate exposure-based treatments for cynophobia (dog phobia) and to test a newly developed hybrid imaginal exposure treatment that we have named active imaginal exposure. The treatment introduces an in vivo coping component to imaginal exposure whereby the patient physically performs coping responses to an imagined feared stimulus. Eighty-two participants meeting DSM-IV criteria for specific phobia (animal subtype) were randomly assigned to one of three 30-min. treatments: (a) active-imaginal exposure (AI), (b) imaginal exposure alone (IE), or (c) graduated in vivo exposure (IV). Participants completed a behavioral approach test at pre, post, and four-week follow-up. Significant pre- to posttreatment improvement was observed in all three treatment conditions. Response rates at posttreatment were 51.9, 62.1, and 73.1% for the IE, AI, and IV groups respectively. Likewise, effect sizes at posttreatment were 0.76, 1.41, and 1.55 for the IE, AI, and IV groups respectively. Although in the predicted direction, the between group differences were not significant. A similar pattern of results was observed at follow-up. Further, safety behavior utilization during treatment was associated with less improvement—particularly in the two imaginal treatment conditions. Exposure treatments of dog phobia appear feasible and effective in reducing phobic fear and avoidance associated with dog phobia. Furthermore, preliminary evidence suggests that our active-imaginal exposure treatment may be a viable alternative to in vivo exposure.

Phobias of animals represent some of the more common subtypes of specific phobia with prevalence rates of 12.1% for women and 3.3% for men (Fredrikson, Annas, Fischer, & Wik, 1996). Among those who seek treatment, 36% present with a phobia of dogs or cats (Chapman, Fyer, Mannuzza, & Klein, 1993). Unlike other phobias of the animal subtype such as phobias of snakes and spiders, dog phobia typically results in significant life impairment due to the estimated 62,400,00 dogs living in the United States (American Pet Products Manufacturing Association, 2000) and their omnipresence. As one of our dog phobic participants stated, “There is hardly a place I can go without running into a dog.” Although the etiology of dog phobia is unknown, it is likely that the 4.5 million dog attacks reported annually (Sacks, Kresnow, & Houston, 1996) contribute to the problem. Numerous studies have demonstrated the efficacy of behavior therapy in treating phobic disorders (Barlow, 1988 and Marks, 1978). Controlled efficacy studies of behavioral treatments for specific phobias reveal a response rate of 76% (Arntz and Lavy, 1993, Hellstrom, Fellenius and Öst, 1996, Hellstrom and Öst, 1995, Öst, 1996a, Öst, Fellenius and Sterner, 1991, Öst, Ferebee and Furmark, 1997, Öst, Hellstrom and Kaver, 1992, Öst, Johansson and Jerremalm, 1982, Öst, Salkovskis and Hellstrom, 1991 and Öst, Sterner and Fellenius, 1989). However, none of these controlled studies focused on treatments of dog phobia. In a case series report, Hoffmann and Odendal (2001) described the use of systematic desensitization in treating dog phobia. Exposure to fear-provoking objects or situations is the central procedural element in behavioral treatments for specific phobias. Exposure techniques vary along several dimensions, including gradation, duration, spacing, facilitation of mastery, and mode of exposure (Tearnan & Telch, 1984). Perhaps the most salient dimension is the mode of exposure: imaginal or in vivo. In vivo exposure is thought to be more powerful than imaginal (Lindemann, 1989); however, it can be inconvenient to conduct, depending on the availability of the stimuli or situations that evoke fear. For example, animal phobias present a challenge to therapists because of the difficulties associated with the housing and care of animals to be used in treatment. While many therapists prefer in vivo techniques because of their presumed greater therapeutic potency, imaginal techniques offer advantages with respect to both convenience and flexibility. Imaginal exposure is easier to conduct in a therapist’s office, and can be readily adapted to fit idiosyncratic situations which evoke fear for the individual patient. Moreover, patients who refuse to confront fearful situations in vivo may be prepared gradually for such exposure using imaginal procedures. Ideally, exposure-based treatments should be both powerful and convenient. Thus, researchers interested in pushing the envelope on phobia treatments are faced with the decision to either develop ways to make in vivo exposure more palatable to patients and more convenient for clinicians or to develop more potent imaginal techniques. Evidence from several sources suggests that imaginal exposure to fear-provoking cues may be enhanced through the inclusion of coping scripts into the imagery scenes. In one variation called covert modeling, the patient imagines a person modeling coping behavior in the fearful situation. Kazdin (1979) found that imaginal exposure was more effective in helping patients increase assertive behavior when they were instructed to imagine an assertive model. Similarly, Foa (1997) showed that covert modeling was an effective addition to stress inoculation training in the treatment of posttraumatic stress disorder (PTSD). The utility of integrating coping imagery into imaginal exposure to fear cues has also been demonstrated in the treatment of panic disorder (Clum, Watkins, Borden, Broyles, & Hayes, 1993). In addition, Goldfried and his colleagues have shown promising results integrating imaginal coping strategies with desensitization (Goldfried, 1971 and Kanter and Goldfried, 1979). In the present study, we investigated the efficacy of a hybrid fear reduction technique that we have named ‘active imaginal’ exposure. In this procedure, the fearful person physically acts out a series of coping responses to the imagined fear-provoking stimulus (i.e., dog). This is in contrast to previous imaginal techniques, which have either relied on imaginal exposure alone or imaginal exposure plus some form of imaginal coping. The rationale for including in vivo coping to an imaginal stimulus was based on the observation that behaviorally enacting actual coping behaviors with an imaginary stimulus is common in martial arts training and presumed to facilitate mastery (Funakoshi, 1973). However, we are aware of no application of this technique to psychosocial treatments of pathological fear. We conjectured that active in vivo coping, when combined with imaginal exposure, might offer an advantage over imaginal coping by enhancing perceived coping efficacy. The primary aim of the current study was to determine whether dog phobia could be successfully ameliorated with psychosocial treatment. A secondary aim was to test the relative efficacy of our hybrid active-imaginal treatment relative to imaginal exposure alone and the gold standard behavioral treatment of graduated in vivo exposure. Finally, based on recent findings demonstrating that safety behavior use during exposure has a deleterious effect on treatment outcome in claustrophobia (Sloan & Telch, 2002), we examined whether safety behavior use during treatment was associated with treatment outcome. We hypothesized that all three treatments would result in clinically significant improvement in subjective fear and behavioral approach and that our hybrid active-imaginal exposure treatment would outperform imaginal exposure and perform as well as the gold standard graduated in vivo exposure. We also predicted that safety behavior utilization during treatment would be associated with a poorer outcome at posttreatment and follow-up. 2. Method 2.1. Participants Eighty-two participants meeting DSM-IV criteria for specific phobia, animal type, took part in the experiment. Participants were recruited from the undergraduate introductory psychology subject pool at the University of Texas at Austin, and from the Austin community. The final sample was predominantly female (87.8%) and ethnically diverse (Black=24.4%, White=22.0%, Hispanic=22.0%, Asian=31.7%, American Indian=1.2%). Mean age of the sample was 18.9 years (SD=3.7). Students received partial course credit for their participation.