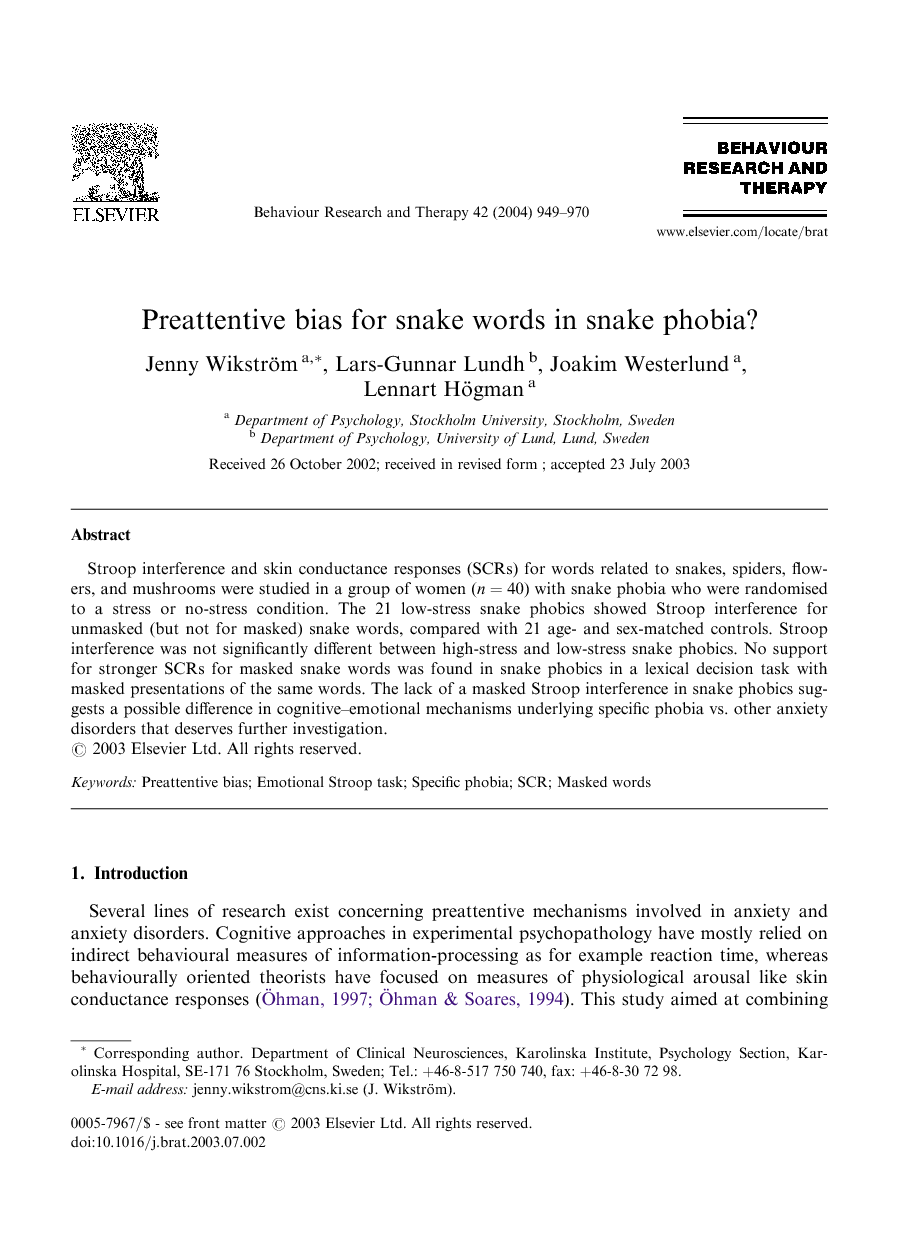 Several lines of research exist concerning preattentive mechanisms involved in anxiety and anxiety disorders. Cognitive approaches in experimental psychopathology have mostly relied on indirect behavioural measures of information-processing as for example reaction time, whereas behaviourally oriented theorists have focused on measures of physiological arousal like skin conductance responses (Öhman, 1997 and Öhman and Soares, 1994). This study aimed at combining these two approaches by studying information processing, as well as physical arousal for masked threat stimuli in individuals suffering from snake phobia. Theories propose that attentional, as well as preattentive biases for threatening information are contributing to and/or maintaining a range of anxiety disorders (Williams, Watts, MacLeod, & Mathews, 1997). One common method in this area is the emotional Stroop paradigm (for an overview, see Williams, Mathews and MacLeod, 1996 and Williams, Watts, MacLeod and Mathews, 1997). In the computer-based emotional Stroop task, the participant is required to report the colour of a word that appears on a computer screen as fast as possible, while ignoring the meaning of the word. Words with threatening content have been shown to increase colour-naming latencies in anxious individuals and this so called ‘Stroop interference’ is presumed to reflect an automatic tendency to attend to (or an inability to let go of) threatening information. Preattentive Stroop interference involving masked words has been shown in clinical anxiety patients with different diagnoses (Bradley, Mogg, Millar and White, 1995, Harvey, Bryant and Rapee, 1996, Lundh, Wikström, Westerlund and Öst, 1999, Mogg, Bradley, Millar and White, 1995 and Mogg, Bradley, Williams and Mathews, 1993), as well as having associations with trait anxiety in non-clinical samples (MacLeod and Hagan, 1992; MacLeod and Rutherford, 1992; Mogg, Kentish, & Bradley, 1993; van Honk, Tuiten, van den Hout, Putman, de Haan & Stam, 2001). With regard to specific phobias, to our knowledge only one study has so far found Stroop interference for masked threat words. This was found with regard to spider words in spider phobics ( van den Hout, Tenney, Huygens, & de Jong, 1997), whereas negative results have also been reported in one study ( Thorpe & Salkovskis, 1997). Non-masked Stroop interference, on the other hand, has reliably been shown in spider phobic adults ( Kindt and Brosschot, 1997, Kindt and Brosschot, 1998 and Thorpe and Salkovskis, 1997), as well as in children suffering from spider phobia ( Kindt, Bierman and Brosschot, 1997 and Kindt and Brosschot, 1999), although children’s Stroop interference failed to differentiate between phobic and non-phobic controls in these studies. In summary, the evidence of Stroop interference involving individuals suffering from specific phobia using unmasked presentation of words seems consistent, while the results with regard to masked Stroop interference for threat words in this population are still inconclusive and need further investigation.

The most suggestive results of the present study are: (a) the large discrepancy between strong Stroop effects for unmasked snake words and no effect on masked snake words in patients with severe snake phobia; and (b) the increased ability in the lexical decision task to discriminate ‘subliminal’ words that had been shown unmasked as part of a previously performed Stroop task. The former result suggests that specific phobia may differ from other anxiety disorders, like GAD, in terms of preattentive processing of word stimuli—to test this possibility, however, these two different kinds of patient groups should be compared directly within the same study.