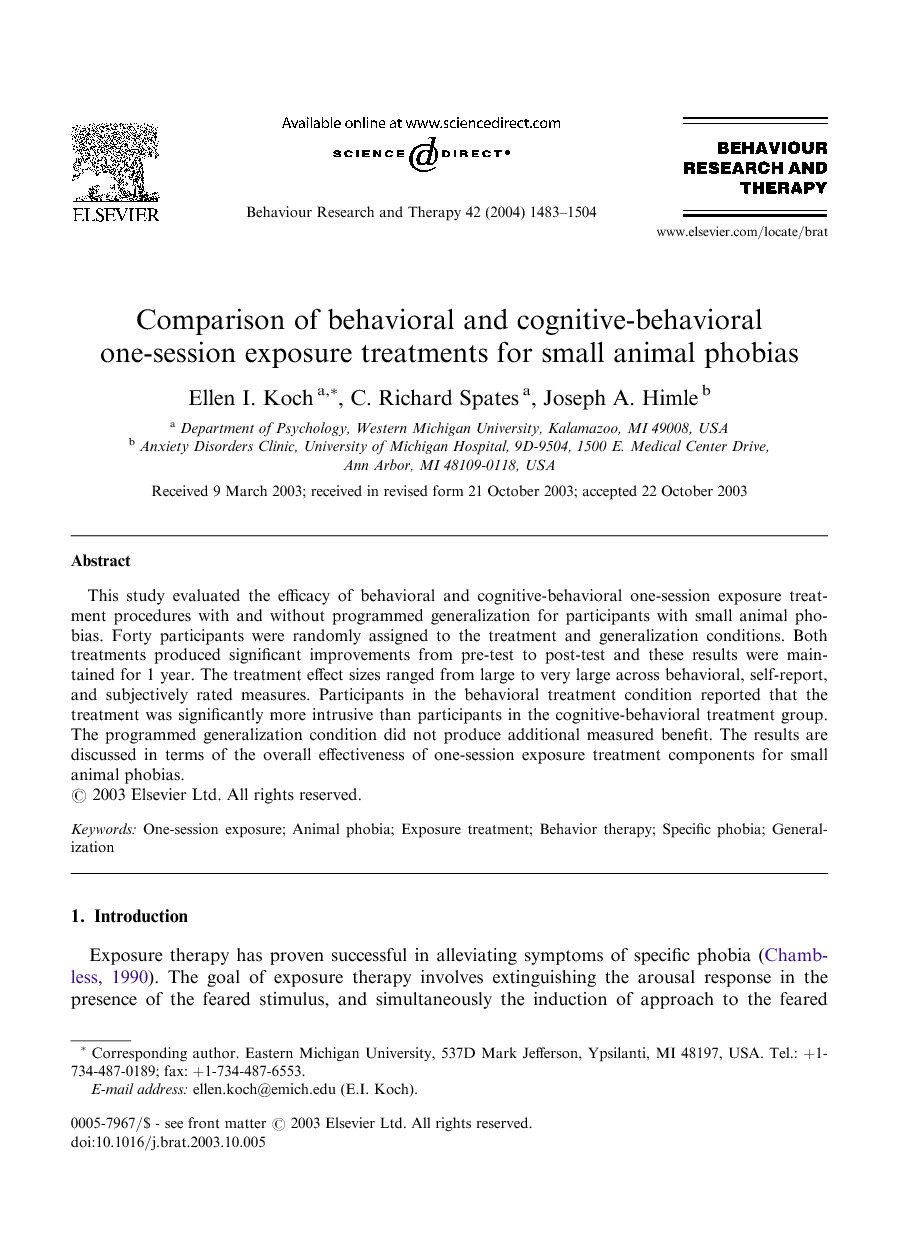 This study evaluated the efficacy of behavioral and cognitive-behavioral one-session exposure treatment procedures with and without programmed generalization for participants with small animal phobias. Forty participants were randomly assigned to the treatment and generalization conditions. Both treatments produced significant improvements from pre-test to post-test and these results were maintained for 1 year. The treatment effect sizes ranged from large to very large across behavioral, self-report, and subjectively rated measures. Participants in the behavioral treatment condition reported that the treatment was significantly more intrusive than participants in the cognitive-behavioral treatment group. The programmed generalization condition did not produce additional measured benefit. The results are discussed in terms of the overall effectiveness of one-session exposure treatment components for small animal phobias.

Exposure therapy has proven successful in alleviating symptoms of specific phobia (Chambless, 1990). The goal of exposure therapy involves extinguishing the arousal response in the presence of the feared stimulus, and simultaneously the induction of approach to the feared object or situation. Throughout exposure treatment, the individual is exposed to the feared situation until the conditioned stimulus no longer evokes the arousal response and anxiety is diminished. The individual remains in the feared situation (i.e. in the presence of the animal) until he or she realizes that the anticipated feared consequences do not happen (Öst, 1989, Öst, 1997a and Öst, 1997b). Variations of exposure treatment have been found to reduce symptoms of anxiety disorders in general and specific phobias in particular. Recent studies have demonstrated the effectiveness of exposure therapy delivered in a single session format (Hellström and Öst, 1995, Koch, Luterek and Spates, 1998, Öst, 1985, Öst, 1987, Öst, 1989, Öst, Hellström and Kåver, 1992 and Öst, Salkovskis and Hellström, 1991). One-session exposure treatment for animal phobias involves a maximum of 3 h and incorporates prolonged, in vivo exposure and participant modeling to the feared stimulus (Öst, 1987 and Öst, 1989). In exposure therapy, the participant approaches the phobic stimulus in a stepwise fashion until he or she is able to maintain close contact with the animal while experiencing little anxiety (Öst, 1989). The therapist continually models how the participant should interact with the feared animal and the participant gradually contacts the stimulus by initially touching the therapist as the therapist touches the feared animal and approaches full contact with the fear stimulus alone. The participant then continues handling the phobic stimulus independently with the therapist merely present in the room (Öst, 1989). This treatment protocol has been utilized in several additional investigations and has shown efficacy and durability with a variety of phobic conditions (i.e. injection, spider, rat, cat, bird, and dog) (Öst, 1989). It has been shown superior to self-directed exposure (Öst et al., 1991) and to manual directed self-exposure for spider phobia treatment (Hellström & Öst, 1995). Öst’s one-session exposure procedure involves cognitive and behavioral interventions to facilitate change (Öst, 1997a and Öst, 1997b). A portion of the treatment procedure involves counteracting the catastrophic beliefs evoked by contact with the feared stimulus (Öst, 1997a). Öst et al. (1991) indicated that “…the most important factor in one-session treatment is making explicit the patient’s catastrophic thoughts concerning the phobic situation and devising the exposure situation in such a way that these can be tested out” (p. 421). However, the influence and necessity of such cognitive interventions within the one-session exposure format have not been empirically demonstrated. Koch and associates (Koch et al., 1998) also tested a behavioral one-session exposure strategy for the treatment of small animal phobias (i.e. snakes, spiders, rats, mice, and crawling insects). This procedure did not include any direct cognitive interventions, yet showed similar results to Öst’s combined exposure and cognitive single session procedure. The treatment produced significant change in behavioral, self-report, and subjectively rated dependent measures from pre-test to post-test particularly in relation to the Behavioral Approach Test (BAT). Additionally, clinically significant improvements were produced for the treatment participants at post-test and follow-up. It is uncertain whether the addition of a cognitive component would have resulted in improved outcomes beyond exposure alone. The present study evaluated whether adding a cognitive intervention to exposure therapy produces additional benefits beyond those achieved with the behavioral one-session exposure procedure. This study also assessed the effectiveness of programmed generalization when added to each treatment. The effectiveness of the treatment and generalization procedures were assessed for short-term and long-term (up to 1 year) effects.