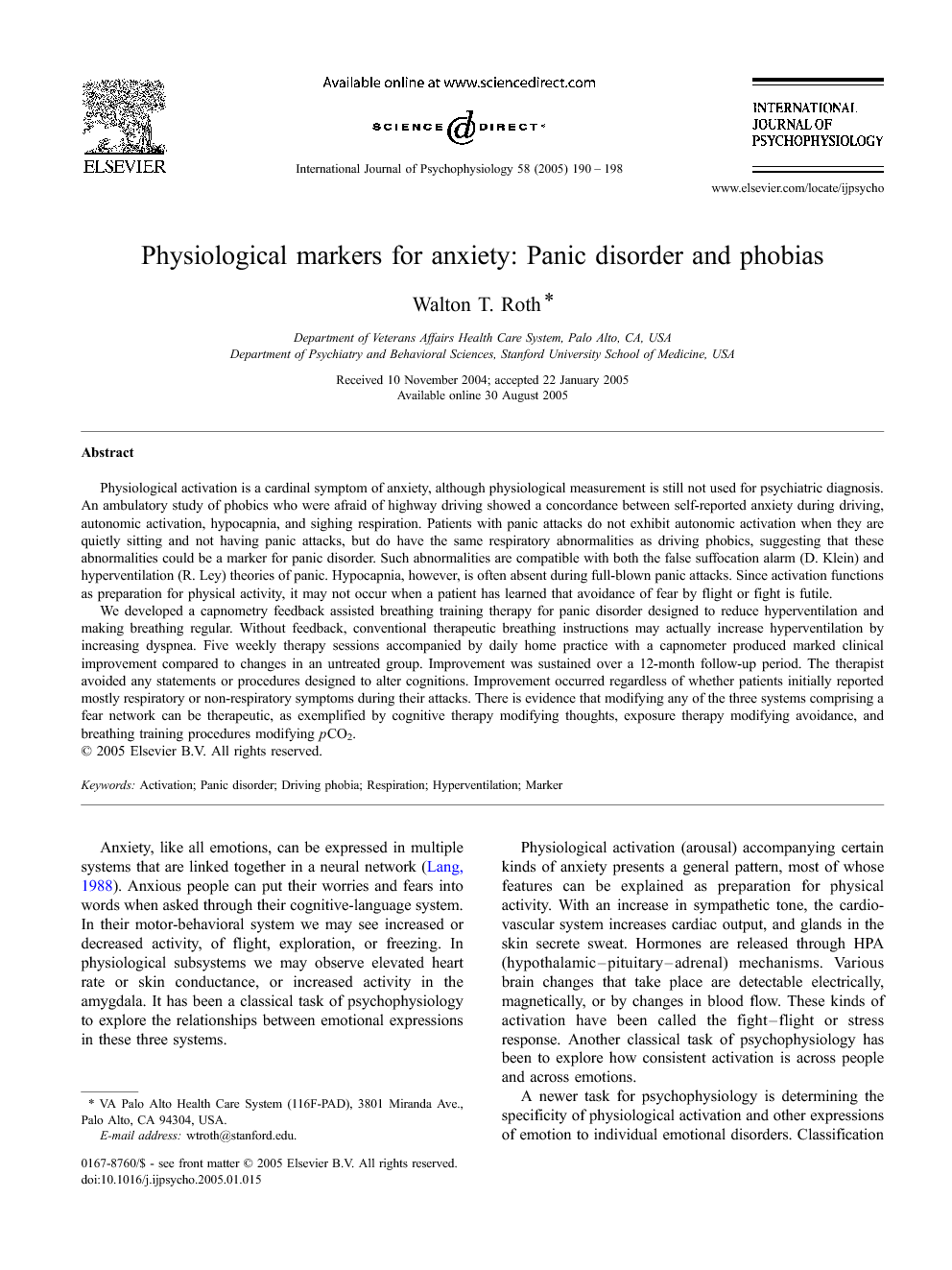 Physiological activation is a cardinal symptom of anxiety, although physiological measurement is still not used for psychiatric diagnosis. An ambulatory study of phobics who were afraid of highway driving showed a concordance between self-reported anxiety during driving, autonomic activation, hypocapnia, and sighing respiration. Patients with panic attacks do not exhibit autonomic activation when they are quietly sitting and not having panic attacks, but do have the same respiratory abnormalities as driving phobics, suggesting that these abnormalities could be a marker for panic disorder. Such abnormalities are compatible with both the false suffocation alarm (D. Klein) and hyperventilation (R. Ley) theories of panic. Hypocapnia, however, is often absent during full-blown panic attacks. Since activation functions as preparation for physical activity, it may not occur when a patient has learned that avoidance of fear by flight or fight is futile. We developed a capnometry feedback assisted breathing training therapy for panic disorder designed to reduce hyperventilation and making breathing regular. Without feedback, conventional therapeutic breathing instructions may actually increase hyperventilation by increasing dyspnea. Five weekly therapy sessions accompanied by daily home practice with a capnometer produced marked clinical improvement compared to changes in an untreated group. Improvement was sustained over a 12-month follow-up period. The therapist avoided any statements or procedures designed to alter cognitions. Improvement occurred regardless of whether patients initially reported mostly respiratory or non-respiratory symptoms during their attacks. There is evidence that modifying any of the three systems comprising a fear network can be therapeutic, as exemplified by cognitive therapy modifying thoughts, exposure therapy modifying avoidance, and breathing training procedures modifying pCO2.

Anxiety, like all emotions, can be expressed in multiple systems that are linked together in a neural network (Lang, 1988). Anxious people can put their worries and fears into words when asked through their cognitive-language system. In their motor-behavioral system we may see increased or decreased activity, of flight, exploration, or freezing. In physiological subsystems we may observe elevated heart rate or skin conductance, or increased activity in the amygdala. It has been a classical task of psychophysiology to explore the relationships between emotional expressions in these three systems. Physiological activation (arousal) accompanying certain kinds of anxiety presents a general pattern, most of whose features can be explained as preparation for physical activity. With an increase in sympathetic tone, the cardiovascular system increases cardiac output, and glands in the skin secrete sweat. Hormones are released through HPA (hypothalamic–pituitary–adrenal) mechanisms. Various brain changes that take place are detectable electrically, magnetically, or by changes in blood flow. These kinds of activation have been called the fight–flight or stress response. Another classical task of psychophysiology has been to explore how consistent activation is across people and across emotions. A newer task for psychophysiology is determining the specificity of physiological activation and other expressions of emotion to individual emotional disorders. Classification of emotional disorders is currently dominated by criteria established by committees established by of the American Psychiatric Association (Diagnostic and Statistical Manual of Mental Disorders, Fourth Edition (DSM-IV)) (American Psychiatric Association, 1994), which presume a medical model of distinct diseases with specific biological etiologies. A focus of research in our laboratory has been panic disorder, a product of that classification, whose criteria and clinical features fit well with the multiple system conception of emotion. In terms of the cognitive-language system, panic attacks are characterized by anxious thoughts, which according to a prominent psychological theory (Clark, 1986) are specifically “catastrophic” with irrational ideas of immediate personal disaster. Although it is dubious that any kind of thought can be proved to be the primary cause of panic attacks (Roth et al., 2005), thoughts that can be called catastrophic are often reported by patients having attacks. In terms of the motor-behavioral system, people with panic disorder commonly manifest avoidances of various kinds, the most obvious of which are agoraphobias. In terms of physiology, the attacks themselves are defined as requiring the presence of at least 4 of a list of 13 mostly physiological symptoms. Of the 13, three suggest increased sympathetic tone–sweating; trembling or shaking; and palpitations, pounding heart, or accelerated heart rate–and five suggest respiratory changes associated with hyperventilation—sensations of shortness of breath or smothering; feeling of choking; chest pain or discomfort; feeling dizzy, unsteady, lightheaded, or faint; and paresthesias. It should be noted that the definition does not require physiological evidence for these changes, but only a retrospective verbal report of having had them. According to the DSM, panic disorder is basically different from phobic disorders. The cognitive-language expression of the disorders usually clearly separates them. Whereas in panic disorder fear is directed at the panic attack itself, in a phobic disorder fear is directed towards something in the outside environment. Two theories of panic suggest a physiological distinction as well: panic attacks are characterized more by abnormalities in respiratory functioning than phobias. The hyperventilation theory of panic postulates that falls in arterial blood CO2 precede and cause attacks, at least many at the beginning of the illness and when other variables such as the buffering effects of blood electrolytes are taken into account (Ley, 1985 and Ley, 1992). Klein's suffocation false alarm theory postulates that panic is provoked by sudden feelings of dyspnea triggered aberrantly in the same brain circuits that monitor blood CO2 levels (Klein, 1993). This theory sees hyperventilation as a compensatory reaction to this alarm rather than a cause of panic. Klein contrasts panic anxiety to “anticipatory anxiety”, which is linked to external stimuli through Pavlovian conditioning and which is characterized more by cardiovascular than respiratory symptoms. One of our research directions has been to explore the physiology of panic and phobic anxiety in the laboratory and in natural situations. Testing patients who meet DSM definition of one of these disorders, we have tried to determine to what extent their physiology differs from the physiology of healthy controls and from that of patients with other anxiety disorders, particularly with respect to respiration.