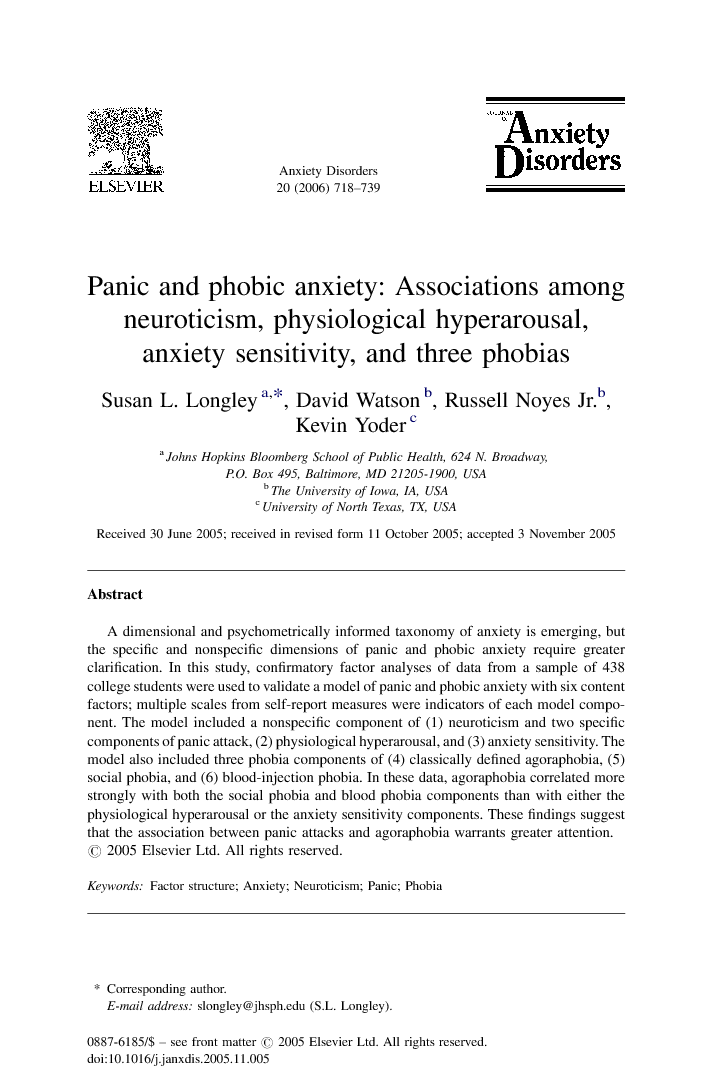 A dimensional and psychometrically informed taxonomy of anxiety is emerging, but the specific and nonspecific dimensions of panic and phobic anxiety require greater clarification. In this study, confirmatory factor analyses of data from a sample of 438 college students were used to validate a model of panic and phobic anxiety with six content factors; multiple scales from self-report measures were indicators of each model component. The model included a nonspecific component of (1) neuroticism and two specific components of panic attack, (2) physiological hyperarousal, and (3) anxiety sensitivity. The model also included three phobia components of (4) classically defined agoraphobia, (5) social phobia, and (6) blood-injection phobia. In these data, agoraphobia correlated more strongly with both the social phobia and blood phobia components than with either the physiological hyperarousal or the anxiety sensitivity components. These findings suggest that the association between panic attacks and agoraphobia warrants greater attention.

Anxiety is fundamentally a useful experience that has adaptive value (Marks & Nesse, 1994; Watson, 2000). Pathological symptoms of panic and phobic anxiety, however, are undeniably debilitating (Andrews & Slade, 2002; Katerndahl & Palmer, 2000; Schmidt, Lerew, & Jackson, 1997). Consequently, there is growing consensus that a taxonomy of these fear-related syndromes should account for both normal and abnormal functioning (Krueger & Piasecki, 2002; Marks & Nesse, 1994; Smoller & Tsuang, 1998; Watson, in press). An empirically informed, dimensional taxonomy has been outlined, based on the assumption that variations in personality and psychopathology fall on a continuum (Krueger, 1999 and Vollebergh et al., 2001). According to this taxonomy, panic and phobic anxiety share nonspecific, trait vulnerabilities but are differentiated by unique symptoms and vulnerabilities (Krueger, 1999; Krueger, McGue, & Iancono, 2001; Mineka, Watson, & Clark, 1998). Although research in this area has addressed significant issues, relevant analyses have largely been performed on dichotomous, rather than continuous, variables (see Watson, in press). To further articulate this dimensional framework, we will perform structural analyses on continuous, self-report measures of panic and phobic anxiety. As with other forms of anxiety, a crucial issue is to validate characteristics that are specific to the fear cluster, versus those that are shared with other forms of anxiety (Barlow, 1988 and Mineka et al., 1998). In this undertaking, findings from dimensional measures of panic and phobic anxiety can both augment and clarify findings based on dichotomous diagnostic categories. These self-report measures define dimensional characteristics and assess continua that span the entire range of behavior and functioning; this circumvents the arbitrary boundaries inherent in categorical diagnostic data (Smoller & Tsuang, 1998). Thus, unlike diagnostic categories, dimensional ratings fully quantify the adaptive-to-maladaptive variations in traits and symptoms (Achenbach, 2005). Moreover, numerous self-report measures of personality and psychopathology show impressive continuity across clinical and nonclinical samples (O’Connor, 2002). We will, therefore, examine self-report measures that assess theoretically significant specific and nonspecific factors that comprise panic and phobic anxiety. Neuroticism is a general component that is a vulnerability factor for all forms of anxiety (Clark, Watson, & Mineka, 1994; Hayward, Killen, Kraemer, & Taylor, 2000; Lesch et al., 1996). Panic attacks are a necessary but not sufficient feature of panic disorder; these attacks have been linked to the specific factors of: (1) physiological hyperarousal—the autonomic arousal symptoms of panic attacks and (2) anxiety sensitivity—the tendency to fear and catastrophically misinterpret anxiety symptoms (Barlow, Brown, & Craske, 1994; Reiss, Peterson, Gursky, & McNally, 1986). The phobias have been classically subdivided into (1) agoraphobia—a fear of crowded and open spaces, (2) social phobia—a fear of social evaluation, and (3) specific phobia (Marks, 1970; Marks & Mathew, 1979). Confirmatory factor analysis of these constructs will allow us to address underlying taxonometric issues about the specificity of panic attacks, agoraphobia, and specific phobia. We will determine the latent factors that are defined and their intercorrelations.