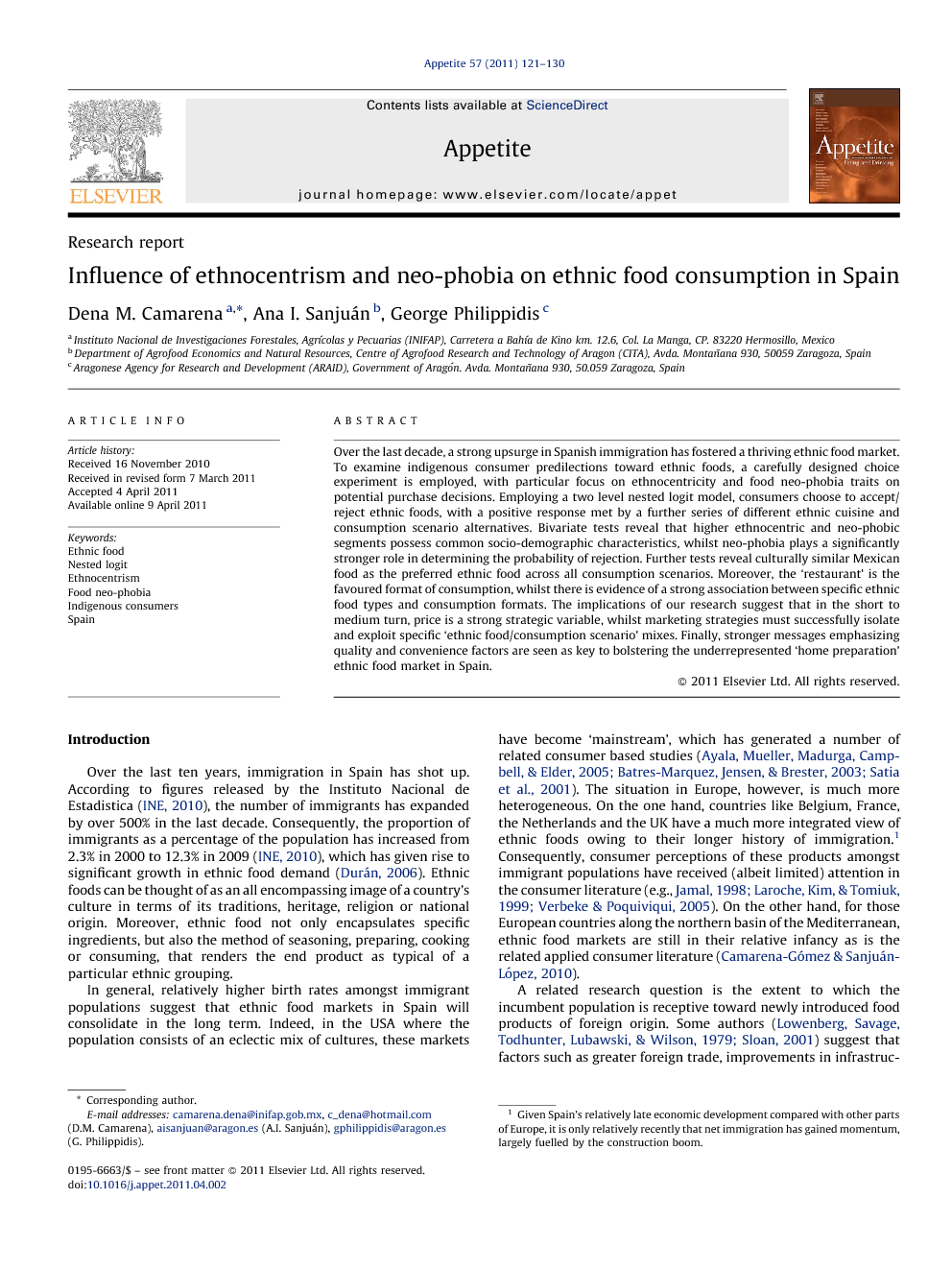 Over the last decade, a strong upsurge in Spanish immigration has fostered a thriving ethnic food market. To examine indigenous consumer predilections toward ethnic foods, a carefully designed choice experiment is employed, with particular focus on ethnocentricity and food neo-phobia traits on potential purchase decisions. Employing a two level nested logit model, consumers choose to accept/reject ethnic foods, with a positive response met by a further series of different ethnic cuisine and consumption scenario alternatives. Bivariate tests reveal that higher ethnocentric and neo-phobic segments possess common socio-demographic characteristics, whilst neo-phobia plays a significantly stronger role in determining the probability of rejection. Further tests reveal culturally similar Mexican food as the preferred ethnic food across all consumption scenarios. Moreover, the ‘restaurant’ is the favoured format of consumption, whilst there is evidence of a strong association between specific ethnic food types and consumption formats. The implications of our research suggest that in the short to medium turn, price is a strong strategic variable, whilst marketing strategies must successfully isolate and exploit specific ‘ethnic food/consumption scenario’ mixes. Finally, stronger messages emphasizing quality and convenience factors are seen as key to bolstering the underrepresented ‘home preparation’ ethnic food market in Spain.

Over the last ten years, immigration in Spain has shot up. According to figures released by the Instituto Nacional de Estadistica (INE, 2010), the number of immigrants has expanded by over 500% in the last decade. Consequently, the proportion of immigrants as a percentage of the population has increased from 2.3% in 2000 to 12.3% in 2009 (INE, 2010), which has given rise to significant growth in ethnic food demand (Durán, 2006). Ethnic foods can be thought of as an all encompassing image of a country's culture in terms of its traditions, heritage, religion or national origin. Moreover, ethnic food not only encapsulates specific ingredients, but also the method of seasoning, preparing, cooking or consuming, that renders the end product as typical of a particular ethnic grouping. In general, relatively higher birth rates amongst immigrant populations suggest that ethnic food markets in Spain will consolidate in the long term. Indeed, in the USA where the population consists of an eclectic mix of cultures, these markets have become ‘mainstream’, which has generated a number of related consumer based studies (Ayala et al., 2005, Batres-Marquez et al., 2003 and Satia et al., 2001). The situation in Europe, however, is much more heterogeneous. On the one hand, countries like Belgium, France, the Netherlands and the UK have a much more integrated view of ethnic foods owing to their longer history of immigration.1 Consequently, consumer perceptions of these products amongst immigrant populations have received (albeit limited) attention in the consumer literature (e.g., Jamal, 1998, Laroche et al., 1999 and Verbeke and Poquiviqui, 2005). On the other hand, for those European countries along the northern basin of the Mediterranean, ethnic food markets are still in their relative infancy as is the related applied consumer literature (Camarena-Gómez & Sanjuán-López, 2010). A related research question is the extent to which the incumbent population is receptive toward newly introduced food products of foreign origin. Some authors (Lowenberg et al., 1979 and Sloan, 2001) suggest that factors such as greater foreign trade, improvements in infrastructure (favouring tourism) and increased varietal preference in food markets, have stimulated ‘domestic’ demand for ethnic food products. Notwithstanding, within European markets there is scant literature (Verbeke & Poquiviqui, 2005) examining those salient mechanisms which determine an indigenous consumer's propensity to reject ethnic foods, whilst for Spain, no such studies exist. Examining the key characteristics of ethnic foods (i.e., ‘new’ and ‘foreign’), we employ pertinent tools of analysis from related consumer studies to deal with both product concepts. Based on the seminal work of Pliner and Hobden (1992), the food neo-phobia scale (FNS) has been employed in various studies (Flight et al., 2003, Henriques et al., 2009, Lähteenmäki and Arvola, 2001 and Raudenbush and Frank, 1999) to assess the degree of (in) congruence exhibited by consumers toward meals or food with which they are not familiar. It is hypothesized that this socio-demographic variable has a powerful cognitive influence over consumer attitudes to ethnic foods. Previous studies have suggested that neo-phobia is inversely related to education levels (Lähteenmäki & Arvola, 2001) or positively related with age (Henriques et al., 2009), whilst Flight et al. (2003) forge a link between rural consumers and neo-phobia. Of more direct interest to this study, Verbeke and Poquiviqui (2005) compare between Belgian and immigrant Hispanic attitudes to ethnic foods and confirm the neo-phobic findings of Lähteenmäki and Arvola (2001) and Flight et al. (2003). A second strand of research employed in this study is the concept of ‘ethnocentricity’. First coined by Sumner (1906), this construct later filtered into the marketing literature as ‘consumer ethnocentricity’ (Shimp, 1984), defined as, “consumer's beliefs in the superiority of their own country's products…rooted in morality…consumer ethnocentricity is intended to capture the notion that some consumers believe that it is somehow wrong to purchase foreign made products, because it will hurt the domestic economy, cause the loss of jobs, and…it is plainly unpatriotic” (Shimp, 1984, p. 285). Examining US consumer proclivities for domestic products, Shimp and Sharma (1987) proposed, developed and validated a CETSCALE (consumer ethnocentric scale) based on a series of statements designed to characterise consumer's dispositions toward dogmatic, patriotic and politically conservative tendencies. Examining consumer preferences for domestic food products, the CETSCALE has been tested and validated as an explanatory variable in numerous countries including China (Klein, Ettenson, & Morris, 1998), Russia (Thelen, Ford, & Honeycutt, 2006), Spain (Luque-Martinez, Ibáñez, & del Barrio, 2000), the UK (Balabanis & Diamantopoulos, 2004), the US, South Korea and India (Kwak, Jaju, & Larsen, 2006). The results of these studies show that ethnocentric consumers are generally of a lower level of income and education, which Shimp and Sharma (1987) suggest may be related to feelings of greater vulnerability to job losses from foreign based competition. Moreover, some studies (Heslop et al., 1998 and Sharma et al., 1995) suggest that cultural similarity between the home region and the foreign region may even blunt ethnocentric tendencies. Employing a choice experiment, the aim of this study is to understand indigenous consumer preferences for ethnic foods. Our objectives are to test for the importance of neo-phobia and ethnocentricity as independent and interdependent explanatory constructs in Spanish consumer's preferences for ethnic foods. In particular, we seek to confirm/reject the socio-demographic tendencies exhibited by food neo-phobic and ethnocentric consumers, which are reported in other studies. To the best of our knowledge, this is the only study which compares both psychographic variables side by side when examining consumer dispositions toward ethnic food. Furthermore, examining different types of ethnic food groups, we test the hypothesis of Sharma et al. (1995) and Heslop et al. (1998) relating perceived cultural similarity with reduced ethnocentric tendencies. The rest of the paper is structured as follows: Methods section presents the design of the experiment; Results section summarizes the analytical framework; in Results section, the psychographic characteristics are presented; in Discussion section, the empirical application and results are discussed; and finally, some conclusions are drawn.

Table 1 presents the socio-demographic profile of our sample and its comparison with corresponding population demographic statistics. Examining gender, the proportional split closely resembles that for Zaragoza. In terms of age, there is an over representation of young adults up to the age of 34 (46.7% in the sample compared with 19.7% in Zaragoza), and under representation of over 55 year olds (14.8% in the sample versus 34.8% in the local population). In the case of examining potential long term market trends for ‘new’ ethnic foods, a younger stratification of consumers may be considered as an advantage. For household composition, the sample is divided more or less equally between consumers who live with a partner but without children; with children; or flat sharing, with proportions slightly over the population. Around 12% of the sample lives on their own, slightly below the corresponding population share (17%).