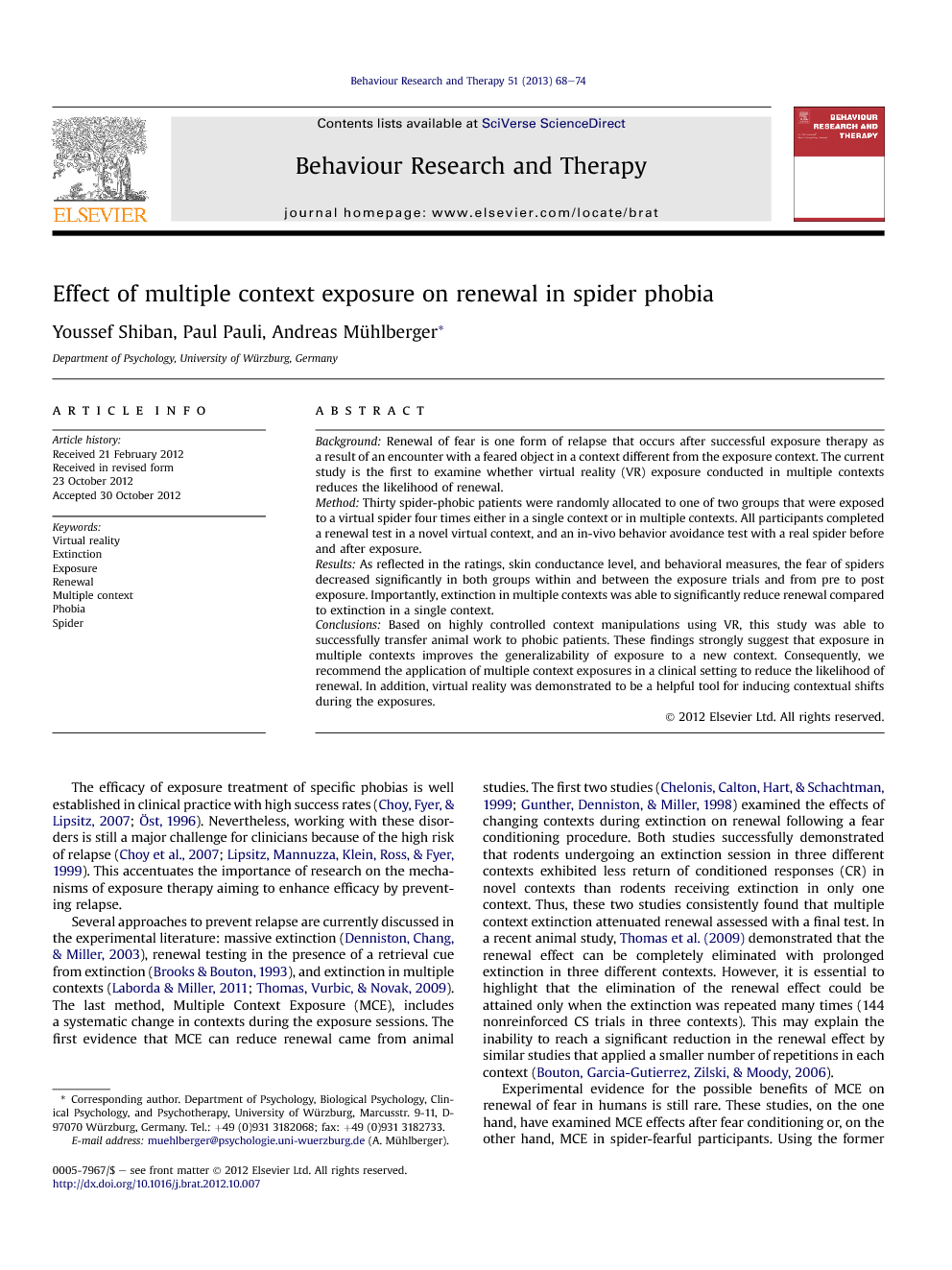 Background Renewal of fear is one form of relapse that occurs after successful exposure therapy as a result of an encounter with a feared object in a context different from the exposure context. The current study is the first to examine whether virtual reality (VR) exposure conducted in multiple contexts reduces the likelihood of renewal. Method Thirty spider-phobic patients were randomly allocated to one of two groups that were exposed to a virtual spider four times either in a single context or in multiple contexts. All participants completed a renewal test in a novel virtual context, and an in-vivo behavior avoidance test with a real spider before and after exposure. Results As reflected in the ratings, skin conductance level, and behavioral measures, the fear of spiders decreased significantly in both groups within and between the exposure trials and from pre to post exposure. Importantly, extinction in multiple contexts was able to significantly reduce renewal compared to extinction in a single context. Conclusions Based on highly controlled context manipulations using VR, this study was able to successfully transfer animal work to phobic patients. These findings strongly suggest that exposure in multiple contexts improves the generalizability of exposure to a new context. Consequently, we recommend the application of multiple context exposures in a clinical setting to reduce the likelihood of renewal. In addition, virtual reality was demonstrated to be a helpful tool for inducing contextual shifts during the exposures.

The efficacy of exposure treatment of specific phobias is well established in clinical practice with high success rates (Choy, Fyer, & Lipsitz, 2007; Öst, 1996). Nevertheless, working with these disorders is still a major challenge for clinicians because of the high risk of relapse (Choy et al., 2007; Lipsitz, Mannuzza, Klein, Ross, & Fyer, 1999). This accentuates the importance of research on the mechanisms of exposure therapy aiming to enhance efficacy by preventing relapse. Several approaches to prevent relapse are currently discussed in the experimental literature: massive extinction (Denniston, Chang, & Miller, 2003), renewal testing in the presence of a retrieval cue from extinction (Brooks & Bouton, 1993), and extinction in multiple contexts (Laborda & Miller, 2011; Thomas, Vurbic, & Novak, 2009). The last method, Multiple Context Exposure (MCE), includes a systematic change in contexts during the exposure sessions. The first evidence that MCE can reduce renewal came from animal studies. The first two studies (Chelonis, Calton, Hart, & Schachtman, 1999; Gunther, Denniston, & Miller, 1998) examined the effects of changing contexts during extinction on renewal following a fear conditioning procedure. Both studies successfully demonstrated that rodents undergoing an extinction session in three different contexts exhibited less return of conditioned responses (CR) in novel contexts than rodents receiving extinction in only one context. Thus, these two studies consistently found that multiple context extinction attenuated renewal assessed with a final test. In a recent animal study, Thomas et al. (2009) demonstrated that the renewal effect can be completely eliminated with prolonged extinction in three different contexts. However, it is essential to highlight that the elimination of the renewal effect could be attained only when the extinction was repeated many times (144 nonreinforced CS trials in three contexts). This may explain the inability to reach a significant reduction in the renewal effect by similar studies that applied a smaller number of repetitions in each context (Bouton, Garcia-Gutierrez, Zilski, & Moody, 2006). Experimental evidence for the possible benefits of MCE on renewal of fear in humans is still rare. These studies, on the one hand, have examined MCE effects after fear conditioning or, on the other hand, MCE in spider-fearful participants. Using the former approach, Neumann (2006) demonstrated that extinction in multiple contexts compared to extinction in one context reduced the likelihood of renewal on subsequent trials conducted in the acquisition context or in a new context. However, the authors admitted that it was unclear whether the return of the conditioned response in the single context group reflected renewal because the same increase occurred in response to a stimulus that had never been paired with the US. In a subsequent study, the same author conducted exposure in three sessions in three different contexts or in two sessions in five different contexts and still could not yield the desired result of renewal attenuation (Neumann, Lipp, & Cory, 2007). Finally, Neumann and Kitlertsirivatana (2010) successfully demonstrated attenuation of renewal by using MCE in a conditioning study. The context manipulation used in their study was a variation of light intensities while an expectancy rating served as the dependent variable. In an interesting recent conditioning study, Balooch, Neumann, and Boschen (2012) demonstrated the renewal attenuating effect of MCE with healthy participants after a fear conditioning protocol with pictures of spiders as the CS. Context was manipulated by presenting pictures of the spiders in different angles in varying locations in a home. MCE effects in fearful subjects were examined by Vansteenwegen et al. (2007). They conducted a treatment-analog experiment with spider-fearful participants using repeated exposure to a videotaped presentation of spiders and compared the effects of exposure in one single compared to three different contexts. They successfully demonstrated that the MCE resulted in a better generalization of extinction when a new videotape was used in a novel location. However, this effect was evident only in the skin conductance response and not in fear ratings. According to the authors, the non-pathological sample may explain the missing effect on the verbal fear ratings. In addition, they proposed that the manipulation (brief video presentation of spiders in different contexts) may not have activated the fear network to a sufficient degree. We are not aware of any clinical study that has investigated MCE effects in anxiety patients. However, addressing a related question, Rowe and Craske (1998) examined spider-phobic patients and reported that using multiple stimuli (different spiders) during extinction reduced renewal during a subsequent follow-up test 3 weeks later. Importantly, this study used multiple stimuli but not multiple contexts. Although these two methods may have a similar mechanism of action (i.e., an increase in the generalization of what is learned during therapy), the study by Rowe and Craske does not allow definite conclusions about the effects of MCE on phobia. With the current study, we aimed to test for the first time if MCE is able to reduce renewal also in a sample of phobia patients (i.e., spider phobia). To this end, spider-phobic patients were randomly allocated to one of two groups that underwent four exposure trials either in one single or in four different contexts. MCE effects were examined by comparing groups first with regard to fear responses (ratings, SCL) across and within exposure trials, and second with regard to fear responses in a subsequent new context and during an in-vivo behavior avoidance test (BAT). The exposure trials as well as the context manipulations were conducted in virtual reality (VR) because this method allows for perfect experimental control of the exposure environment (Gerardi, Cukor, Difede, Rizzo, & Rothbaum, 2010; Mühlberger, Bülthoff, Wiedemann, & Pauli, 2007) and because VR exposure has been demonstrated to have an effective therapeutic impact in treating phobias, even after only one session (Mühlberger, Weik, Pauli, & Wiedemann, 2006). The final BAT with a real spider was considered crucial for testing first if exposure in VR becomes generalized to a real spider and, most importantly, if MCE attenuates fear responses also in this context.