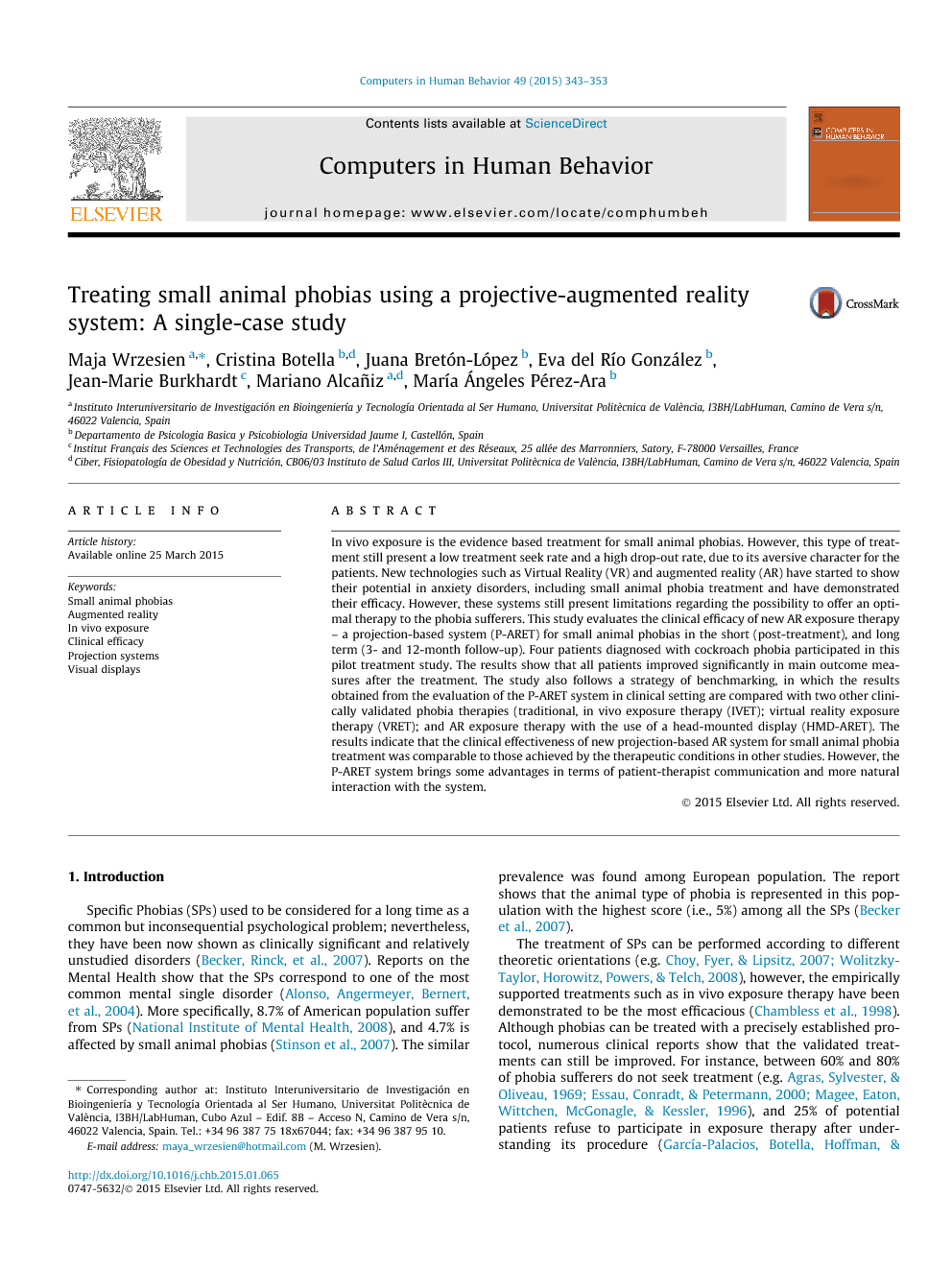 In vivo exposure is the evidence based treatment for small animal phobias. However, this type of treatment still present a low treatment seek rate and a high drop-out rate, due to its aversive character for the patients. New technologies such as Virtual Reality (VR) and augmented reality (AR) have started to show their potential in anxiety disorders, including small animal phobia treatment and have demonstrated their efficacy. However, these systems still present limitations regarding the possibility to offer an optimal therapy to the phobia sufferers. This study evaluates the clinical efficacy of new AR exposure therapy – a projection-based system (P-ARET) for small animal phobias in the short (post-treatment), and long term (3- and 12-month follow-up). Four patients diagnosed with cockroach phobia participated in this pilot treatment study. The results show that all patients improved significantly in main outcome measures after the treatment. The study also follows a strategy of benchmarking, in which the results obtained from the evaluation of the P-ARET system in clinical setting are compared with two other clinically validated phobia therapies (traditional, in vivo exposure therapy (IVET); virtual reality exposure therapy (VRET); and AR exposure therapy with the use of a head-mounted display (HMD-ARET). The results indicate that the clinical effectiveness of new projection-based AR system for small animal phobia treatment was comparable to those achieved by the therapeutic conditions in other studies. However, the P-ARET system brings some advantages in terms of patient-therapist communication and more natural interaction with the system.

ICT based psychological treatments are slowly moving from the researchers’ laboratories to the therapists’ offices. ICT provide patients with more motivating and engaging therapeutic context, while keeping the characteristics of a natural but safe and controlled environment. Projection-based AR technology brings new promises to the daily work of therapists with their patients. The system allows therapist and patients the most natural interactions with the phobic stimuli, using real objects in the real world, without the necessities of head mounted display or other intrusive hardware. We believe that this study is a first step in understanding how different types of technology influence the therapeutic process and its efficacy, contributing to the literature as a first single-case study showing evidence of this kind of intervention using Projection-based AR technology.