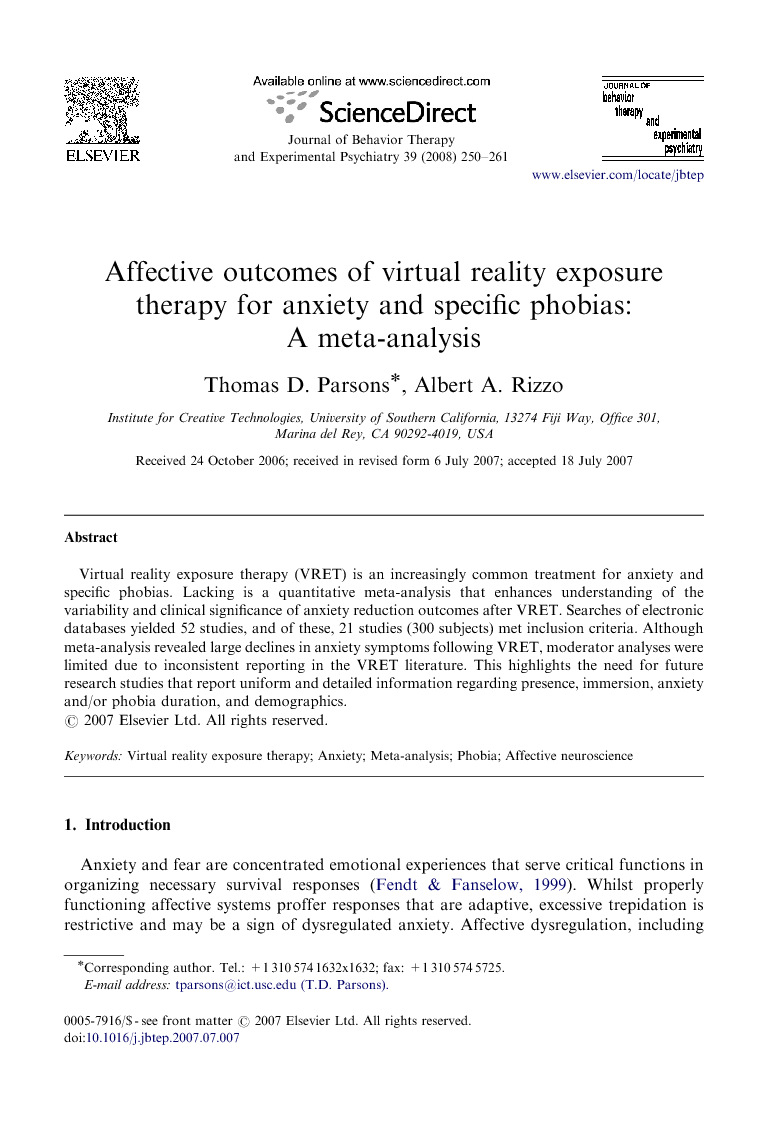 Virtual reality exposure therapy (VRET) is an increasingly common treatment for anxiety and specific phobias. Lacking is a quantitative meta-analysis that enhances understanding of the variability and clinical significance of anxiety reduction outcomes after VRET. Searches of electronic databases yielded 52 studies, and of these, 21 studies (300 subjects) met inclusion criteria. Although meta-analysis revealed large declines in anxiety symptoms following VRET, moderator analyses were limited due to inconsistent reporting in the VRET literature. This highlights the need for future research studies that report uniform and detailed information regarding presence, immersion, anxiety and/or phobia duration, and demographics.

Anxiety and fear are concentrated emotional experiences that serve critical functions in organizing necessary survival responses (Fendt & Fanselow, 1999). Whilst properly functioning affective systems proffer responses that are adaptive, excessive trepidation is restrictive and may be a sign of dysregulated anxiety. Affective dysregulation, including anxiety disorders, specific phobias, as well as panic disorder and post-traumatic stress disorder (PTSD), may lead to significant impairments in normal life functioning. Repeated and early exposure to stress in persons with a particular genetic disposition may result in a decreased threshold for developing anxiety (Heim & Nemeroff, 1999). Over-excitation and deprivation can influence the affective system and may induce changes in the emotional circuitry of the brain that can contribute to stress-related psychopathology (Davidson, Jackson, & Kalin, 2000). A good deal of research has shown that exposure therapy is effective for reducing negative affective symptoms (Rothbaum & Schwartz, 2002). In vivo exposure therapy has been found to have greater efficacy when compared to imaginal exposure, especially in the treatment of specific phobias (Emmelkamp, 2003). Exposure to emotional situations and prolonged rehearsal result in the regular activation of cerebral metabolism in brain areas associated with inhibition of maladaptive associative processes (Schwartz, 1998). Identical neural circuits have been found to be involved in affective regulation across affective disorders (De Raedt, 2006; Mineka, Watson, & Clark, 1998). Systematic and controlled therapeutic exposure to phobic stimuli may enhance emotional regulation through adjustments of inhibitory processes on the amygdala by the medial prefrontal cortex during exposure and structural changes in the hippocampus after successful therapy (Hariri, Bookheimer, & Mazziotta, 2000). A novel tool for conducting exposure therapy is virtual reality exposure therapy (VRET), in which users are immersed within a computer-generated simulation or virtual environment (VE), that updates in a natural way to the users head and/or body motion. When a user is immersed in a VE, they can be systematically exposed to specific feared stimuli within a contextually relevant setting. VRET comports well with the emotion-processing model, which holds that the fear network must be activated through confrontation with threatening stimuli and that new, incompatible information must be added into the emotional network (Foa & Kozak, 1986; Wilhelm et al., 2005). Empirical data from research assessing the efficacy of VRET on affective outcomes have been increasingly emerging over the last 10 years as VR systems have become less costly, more available and generally more usable. While much of the research to date has been comprised withcase studies, open clinical trials, and uncontrolled designs, a number of qualitative reviews (Botella et al., 2004; Glantz & Rizzo, 2003; Hodges, Anderson, Burdea, Hoffman, & Rothbaum, 2001; Krijn, Emmelkamp, Olafsson, & Biemond, 2004b; Pull, 2005) of initial VRET research have concluded that VRET has good potential as a treatment approach for several specific phobias (i.e. acrophobia, fear of driving, claustrophobia, aviophobia, and arachnophobia). The rationale for this view typically derives from early evidence that VRET produces better outcomes than imaginal exposure and that it provides equivalent outcomes and is a pragmatically attractive alternative to in vivo exposure (Emmelkamp, 2003). Further, these reviews qualitatively summarize findings from several studies that have yielded promising results with VRET in the treatment of PTSD and social anxiety disorder. A potential problem in interpreting and reconciling findings about the nature and extent of affective changes ensuing from VRET is that a number of factors other than virtual reality exposure per se may be associated with such changes, including, for example, presence, immersion, anxiety and/or phobia duration, diagnostic groups, demographics (e.g. age, gender, and ethnicity). Furthermore, the vast majority of VRET studies have reported on small sample sizes and made use of inadequate null hypothesis significance testing. Until large-scale studies on the affective effects of VRET are published, statistical meta-analyses represent an interim remedy. Such analyses provide estimates of a population effect size across independent studies. They increase statistical power to detect true nonzero population effects by lowering the standard error, and consequently narrowing the confidence intervals associated with the population effect size estimate (Cohn & Becker, 2003). Hence, a quantitative meta-analysis, as opposed to a qualitative review, might facilitate a better understanding of the variability and clinical significance of affective change subsequent to VRET. In view of this need, the present study sought to examine the magnitude of VRET-related changes in six domains and an overall effect size for affective functioning across studies using meta-analytic methodologies.

Given the currently available data, it appears that VRET is relatively effective from a psychotherapeutic standpoint in carefully selected patients. VRET can reduce anxiety and phobia symptoms. Whether the affective enhancements are directly related to VRET, or some other factor, remains to be specified, as do the clinical predictors for such improvements. The meta-analytic findings parallel qualitative reviews revealing that VRET has potential for the treatment of anxiety and several specific phobias. Further, this meta-analysis extends the existing literature through facilitation of a better understanding of the variability and clinical significance of affective improvement subsequent to VRET. There is a need for additional well-designed and adequately powered studies investigating the affective outcomes of VRET, more extensive and uniform reporting of data, and for meta-analysis of the VRET effects on cognition, depression, and quality of life.