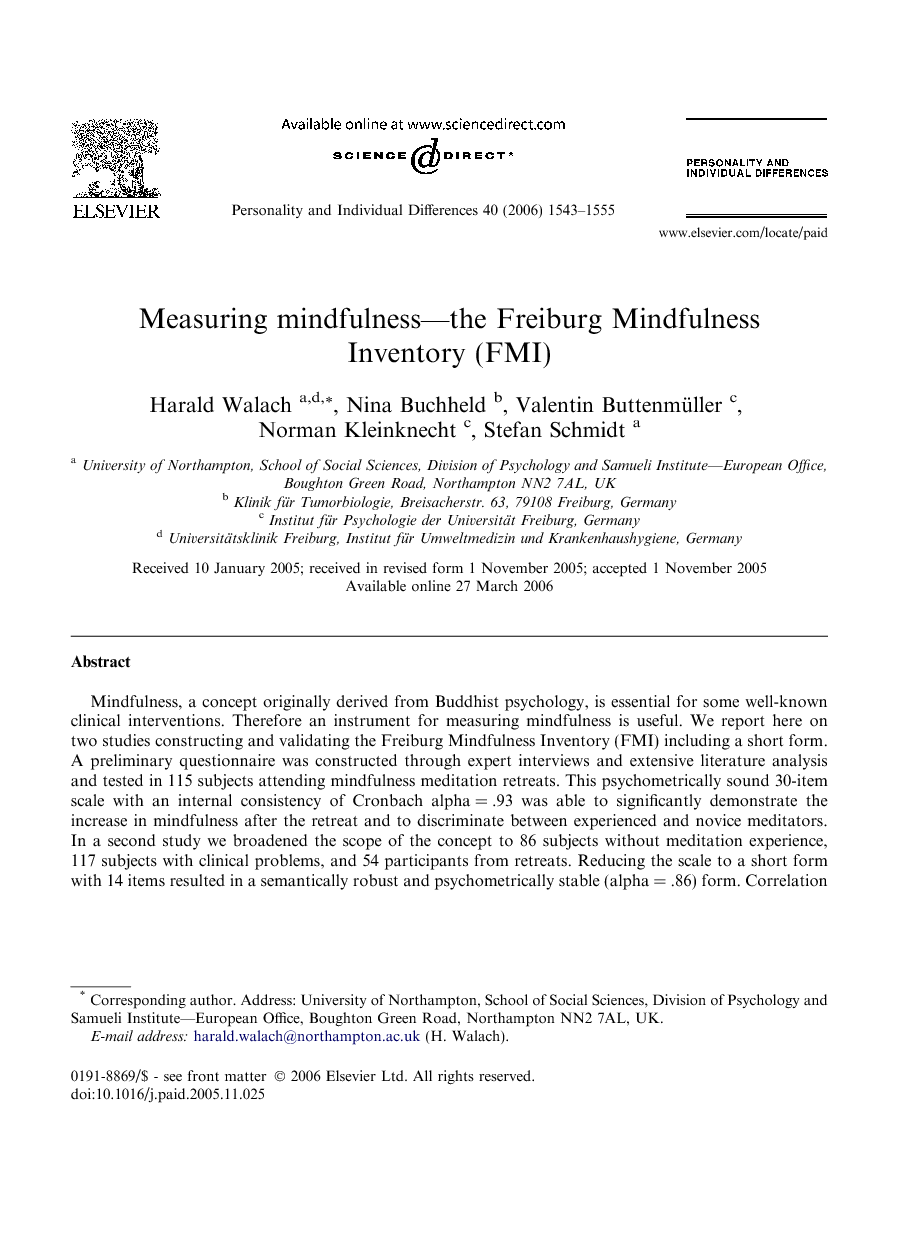 Mindfulness, a concept originally derived from Buddhist psychology, is essential for some well-known clinical interventions. Therefore an instrument for measuring mindfulness is useful. We report here on two studies constructing and validating the Freiburg Mindfulness Inventory (FMI) including a short form. A preliminary questionnaire was constructed through expert interviews and extensive literature analysis and tested in 115 subjects attending mindfulness meditation retreats. This psychometrically sound 30-item scale with an internal consistency of Cronbach alpha = .93 was able to significantly demonstrate the increase in mindfulness after the retreat and to discriminate between experienced and novice meditators. In a second study we broadened the scope of the concept to 86 subjects without meditation experience, 117 subjects with clinical problems, and 54 participants from retreats. Reducing the scale to a short form with 14 items resulted in a semantically robust and psychometrically stable (alpha = .86) form. Correlation with other relevant constructs (self-awareness, dissociation, global severity index, meditation experience in years) was significant in the medium to low range of correlations and lends construct validity to the scale. Principal Component Analysis suggests one common factor. This short scale is sensitive to change and can be used also with subjects without previous meditation experience.

The popularity of Mindfulness Based Stress Reduction (MBSR) developed by Kabat-Zinn, 1991 and Kabat-Zinn, 1994, and positive research results which demonstrate its effectiveness (Davidson et al., 2003, Kabat-Zinn, 1982, Kabat-Zinn et al., 1985, Kabat-Zinn et al., 1987, Kabat-Zinn et al., 1992, Kabat-Zinn et al., 1998, Majumdar et al., 2002 and Miller et al., 1995) contribute to the increasing interest in mindfulness. A meta-analysis of studies testing the clinical effectiveness of MBSR found a significant effect size of d = 0.5 ( Grossman, Schmidt, Niemann, & Walach, 2004). Dialectical Behaviour Therapy for borderline patients ( Bohus et al., 2000) or Teasdale’s concept of cognitive therapy ( Segal et al., 2002, Teasdale et al., 1995 and Teasdale et al., 2000) for depression employ mindfulness as a therapeutic concept. The mindfulness concept is central in Buddhist teachings about the importance of consciousness (Hayes, 2003). It describes a virtue to be cultivated by meditation and practice in everyday life, and refers to an alert mode of perceiving all mental contents—perceptions, sensations, cognitions, affects. Another important element is a warm and friendly, accepting and non-judgmental attitude towards those elements of our mind. Suspending categorical judgments, which normally follow every perception rather quickly, is an integral part of mindfulness. A recent consensus description of mindfulness says: “We see mindfulness as a process of regulating attention in order to bring a quality of nonelaborative awareness to current experience and a quality of relating to one’s experience within an orientation of curiosity, experiential openness, and acceptance. We further see mindfulness as a process of gaining insight into the nature of one’s mind and the adoption of a de-centered perspective… on thoughts and feelings so that they can be experienced in terms of their subjectivity (versus their necessary validity) and transient nature (versus their permanence).” (Bishop et al., 2004, p. 234). It thus seems useful to measure mindfulness either as a target variable of clinical interventions, as a moderating variable, and perhaps even as a personality trait, and thus we constructed a measurement instrument. Several other attempts of constructing such a scale have recently been reported, which have run in parallel to our own and unknown by us at the time of our initial work (Buchheld, 2000, Buchheld and Walach, 2001 and Buchheld and Walach, 2002). A closer analysis of these attempts of measuring mindfulness reveals a different conceptualisation, and thus we feel confident that our own work can only stimulate research, conceptualisation and further scientific work.