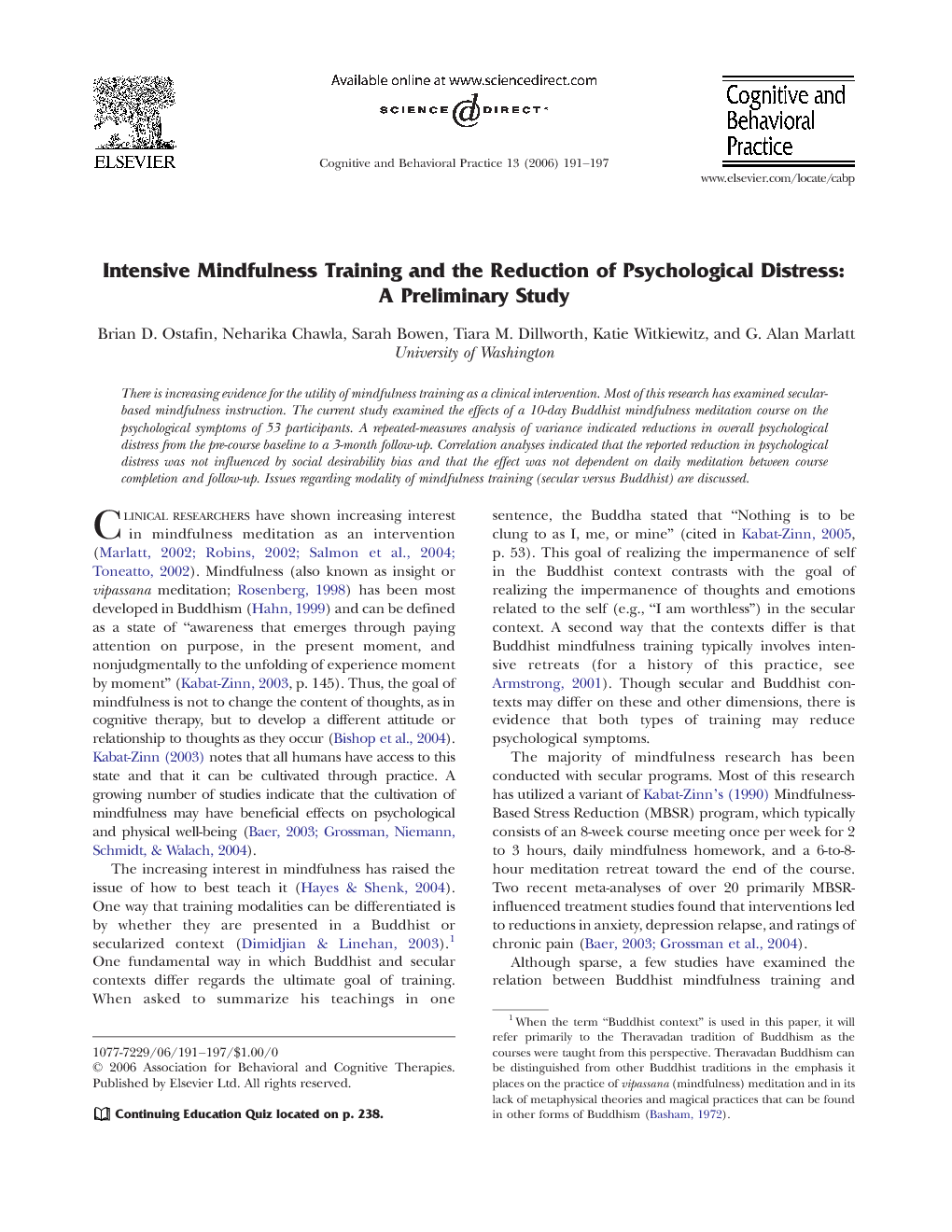 There is increasing evidence for the utility of mindfulness training as a clinical intervention. Most of this research has examined secular-based mindfulness instruction. The current study examined the effects of a 10-day Buddhist mindfulness meditation course on the psychological symptoms of 53 participants. A repeated-measures analysis of variance indicated reductions in overall psychological distress from the pre-course baseline to a 3-month follow-up. Correlation analyses indicated that the reported reduction in psychological distress was not influenced by social desirability bias and that the effect was not dependent on daily meditation between course completion and follow-up. Issues regarding modality of mindfulness training (secular versus Buddhist) are discussed.

Clinical researchers have shown increasing interest in mindfulness meditation as an intervention (Marlatt, 2002, Robins, 2002, Salmon et al., 2004 and Toneatto, 2002). Mindfulness (also known as insight or vipassana meditation; Rosenberg, 1998) has been most developed in Buddhism ( Hahn, 1999) and can be defined as a state of “awareness that emerges through paying attention on purpose, in the present moment, and nonjudgmentally to the unfolding of experience moment by moment” ( Kabat-Zinn, 2003, p. 145). Thus, the goal of mindfulness is not to change the content of thoughts, as in cognitive therapy, but to develop a different attitude or relationship to thoughts as they occur ( Bishop et al., 2004). Kabat-Zinn (2003) notes that all humans have access to this state and that it can be cultivated through practice. A growing number of studies indicate that the cultivation of mindfulness may have beneficial effects on psychological and physical well-being ( Baer, 2003 and Grossman et al., 2004). The increasing interest in mindfulness has raised the issue of how to best teach it (Hayes & Shenk, 2004). One way that training modalities can be differentiated is by whether they are presented in a Buddhist or secularized context (Dimidjian & Linehan, 2003).1 One fundamental way in which Buddhist and secular contexts differ regards the ultimate goal of training. When asked to summarize his teachings in one sentence, the Buddha stated that “Nothing is to be clung to as I, me, or mine” (cited in Kabat-Zinn, 2005, p. 53). This goal of realizing the impermanence of self in the Buddhist context contrasts with the goal of realizing the impermanence of thoughts and emotions related to the self (e.g., “I am worthless”) in the secular context. A second way that the contexts differ is that Buddhist mindfulness training typically involves intensive retreats (for a history of this practice, see Armstrong, 2001). Though secular and Buddhist contexts may differ on these and other dimensions, there is evidence that both types of training may reduce psychological symptoms. The majority of mindfulness research has been conducted with secular programs. Most of this research has utilized a variant of Kabat-Zinn’s (1990) Mindfulness-Based Stress Reduction (MBSR) program, which typically consists of an 8-week course meeting once per week for 2 to 3 hours, daily mindfulness homework, and a 6-to-8-hour meditation retreat toward the end of the course. Two recent meta-analyses of over 20 primarily MBSR-influenced treatment studies found that interventions led to reductions in anxiety, depression relapse, and ratings of chronic pain (Baer, 2003 and Grossman et al., 2004). Although sparse, a few studies have examined the relation between Buddhist mindfulness training and psychological outcomes. Cross-sectional research has found that experienced vipassana meditators (3 or more years of experience) reported more positive relative to negative affect than beginning meditators ( Easterlin & Cardeña, 1998). Similar effects have been found in experimental research. One study found that immediately after a 10-day vipassana retreat, meditators reported less anxiety and depression than did those in a nonmatched control group ( Al-Hussaini et al., 2001). Two unpublished studies examining the effect of a 10-day vipassana retreat on prisoners in India also found beneficial effects on psychological symptoms ( Chandiramani, Verma, & Dhar, 1995). Bowen et al. (in press) recently examined the effects of a 10-day vipassana retreat on the substance use of an incarcerated sample. The results indicated that at a 3-month (after jail release) follow-up, meditators demonstrated reductions in psychological symptoms and alcohol and drug use. In sum, there is a growing literature on the effects of mindfulness interventions on psychological distress. Because the majority of this research has been conducted with secular mindfulness training programs, it is unclear whether other modalities for teaching mindfulness may be useful. Findings from a small number of studies suggest that Buddhist mindfulness training may have beneficial effects on psychological symptoms, but the paucity of this research and the general lack of follow-up assessment indicate a need for more such studies. Overview of the Current Study The current study was designed to assess changes in psychological distress following participation in an intensive 10-day vipassana meditation course. Positive findings in this study would suggest both the utility of teaching mindfulness in a Buddhist context and avenues for future research. To accomplish this aim, a sample of meditation participants completed assessment packets before a course and at a 3-month follow-up. The primary hypothesis was that participants would report reductions in psychological distress at follow-up; the secondary hypothesis was that frequency of meditation between the course and follow-up would be correlated with greater reductions in psychological distress.