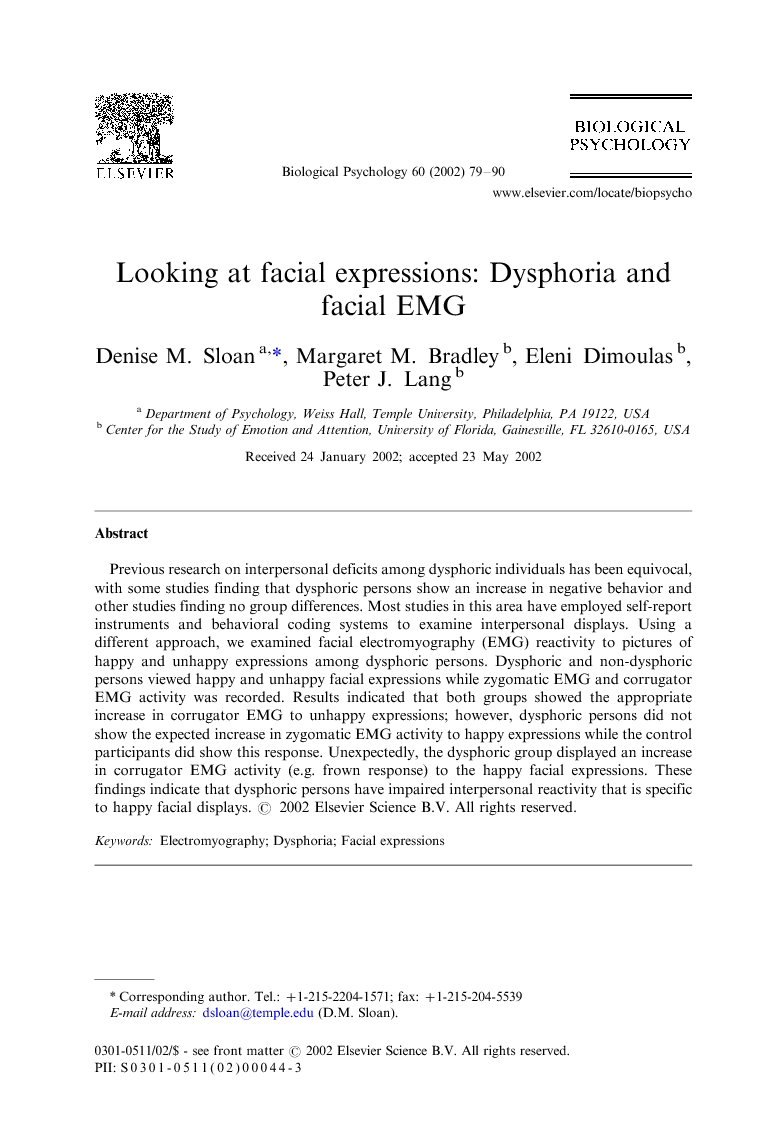 Imagine you are at a party telling a new acquaintance a story you believe is amusing. As the story progresses, the person remains stone-faced, seemingly unamused, making you uncomfortable. As a result, you terminate the interaction as quickly as possible. Most people learn early in life that a socially appropriate response is to show amusement when someone is telling an amusing story, even if the listener does not find the story amusing. Displaying an inappropriate social response, such as no response, could lead a person to become socially alienated. Inappropriate social responses have been noted to occur among individuals high in depressive symptomatology, also referred to as dysphoria or depressed mood (Kendall et al., 1987). For the purpose of clarity we will use the term dysphoric to describe persons high in depressive symptomatology. Several inappropriate social responses have been observed among dysphoric person. For instance, during social interactions, dysphoric persons display both nonverbal (e.g. holding head down, poor eye contact, few gestures) and verbal (e.g. long pauses, inappropriate self-disclosures, few utterances) signs of poor social interaction skills (for a review see, Segrin, 2000). Given these behavioral deficits it is not surprising that dysphoric individuals both rate themselves, and are judged by objective observers to be less socially competent than others (e.g. Dykman et al., 1991, Lewinsohn et al., 1980 and Segrin, 1993). Deficits in interpersonal behavior can have a detrimental effect on social relationships and may result in others minimizing interactions with, and perhaps even rejecting, a dysphoric person (Segrin, 2000). Indeed, there is a substantial body of evidence indicating that dysphoric individuals have poor interpersonal relationships and are frequently rejected by others (e.g. Coyne, 1976, Gotlib and Beatty, 1985 and Alloy et al., 1998). A number of studies examining interpersonal behaviors in dysphoria have focused on either self-report of interpersonal behaviors (Cole et al., 1987, Lewinsohn et al., 1980 and Segrin and Dillard, 1993) or have used a behavioral approach to study these behaviors, such as assessing eye contact, verbal comments, and body gestures (Andersen and Bowman, 1990, Dow and Craighead, 1987, Fossi et al., 1984, Gaebel and Woelwer, 1992 and Gotlib, 1982). Though social skills deficits in dysphoria appear to be widespread, a meta-analysis of the literature indicated that these deficits are most evident when measured with self-report instruments (Segrin and Dillard, 1993). In contrast, the deficits appear to be less consistent when using observer ratings. These equivocal findings may be due to the fact that dysphoric individuals tend to negatively evaluate their social skills, even in the absence of objective information (Segrin, 2000). Alternatively, the faulty interpersonal responses may be too subtle to be reliably detected using a behavioral approach, which usually involves videotaping social responses and later quantifying the responses using a coding system. This approach can be problematic because the behavioral coding systems may not be those behaviors that are most critical to the social interaction. Further, social interactions consist of capturing nuanced behaviors (e.g. slight curve of the lip, subtle flare of the nostril) that may be difficult to capture using behavioral coding systems (Segrin, 1998). Another approach to measuring social displays is to employ physiological indices, such as facial electromyography (EMG). Indeed, facial EMG reactivity in an interpersonal context has been investigated extensively with non-clinical populations (Dimberg, 1990 and Lang et al., 1993). For instance, Dimberg, 1990, Dimberg, 1997a and Dimberg, 1997b and Dimberg et al. (2000) have found that when participants are shown pictures of people with smiling expressions, zygomatic EMG activity increased within 300 ms of the stimulus onset. Similarly, when viewing a person with an unhappy facial expression, participants showed a rapid (i.e. under 300 ms) corrugator EMG activity. This pattern of response is consistent with findings that the zygomatic muscle is associated with the smile response and the corrugator muscle is associated with the frown response (Cacioppo et al., 1986 and Lang et al., 1993). The facial EMG patterns displayed in response to facial expressions have been interpreted as a mimicking response and are thought to represent an important evolutionary social reaction (Ekman, 1971). Dimberg (1990) has further speculated that these responses are inborn, as they are observed early in life. In the current study, we examined patterns of facial EMG reactivity when dysphoric individuals looked at pictures depicting different types of emotional expressions. If these individuals have a social skill deficit, we expected that patterns of facial EMG activity when viewing pictures of people showing pleasant and unpleasant facial expressions would differ from a non-dysphoric control group. A general deficit in social reactivity would predict that dysphoric individuals fail to show increased zygomatic EMG activity when viewing smiling faces as well as increased corrugator EMG activity when viewing frowning faces. It is also possible that dysphoric individuals show an impaired social response to pleasant interpersonal situations only, consistent with the notion of low positive affect (Clark and Watson, 1991 and Sloan et al., 2001), and would subsequently display a lack of zygomatic reactivity in response to happy facial expressions.