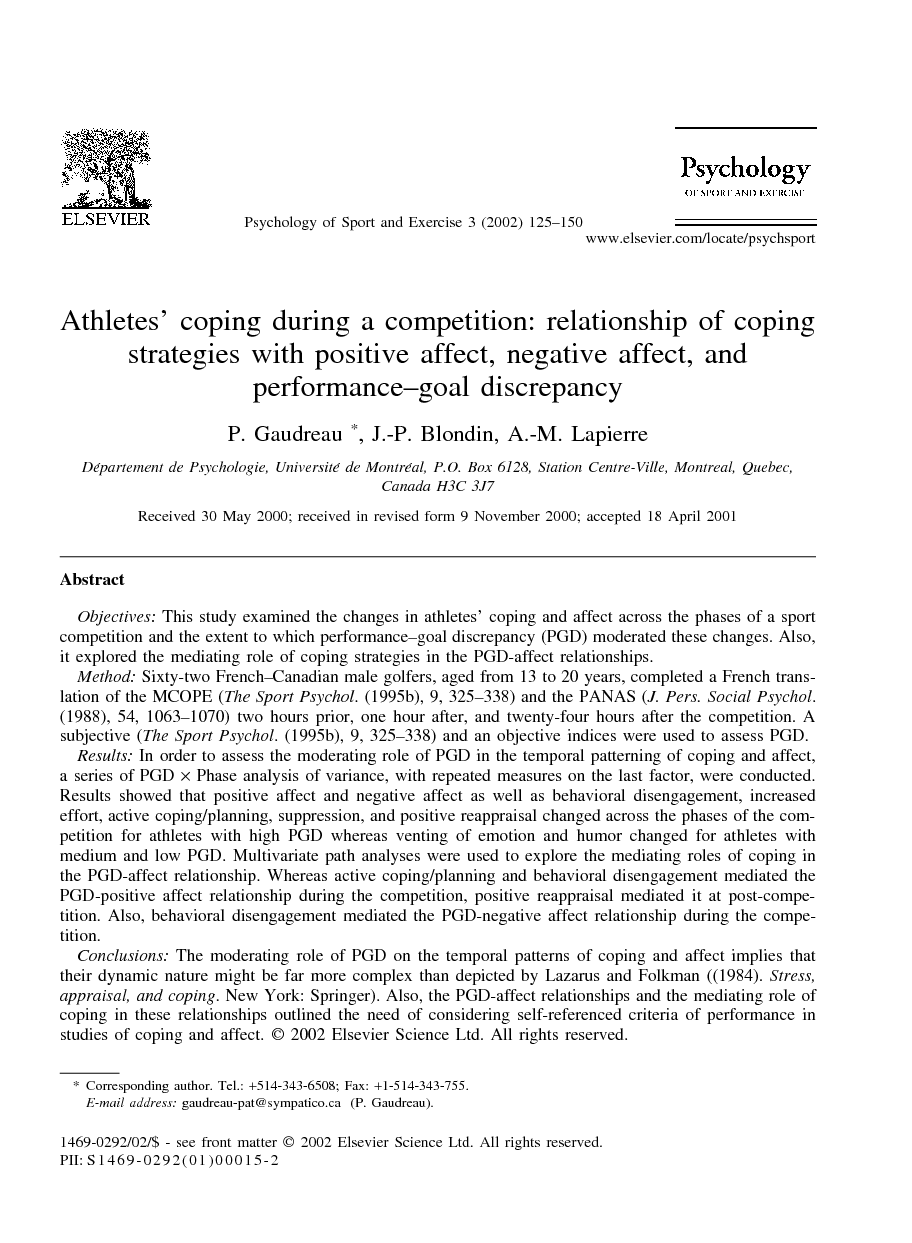 Objectives: This study examined the changes in athletes' coping and affect across the phases of a sport competition and the extent to which performance–goal discrepancy (PGD) moderated these changes. Also, it explored the mediating role of coping strategies in the PGD-affect relationships. Method: Sixty-two French–Canadian male golfers, aged from 13 to 20 years, completed a French translation of the MCOPE (The Sport Psychol. (1995b), 9, 325–338) and the PANAS (J. Pers. Social Psychol. (1988), 54, 1063–1070) two hours prior, one hour after, and twenty-four hours after the competition. A subjective (The Sport Psychol. (1995b), 9, 325–338) and an objective indices were used to assess PGD. Results: In order to assess the moderating role of PGD in the temporal patterning of coping and affect, a series of PGD × Phase analysis of variance, with repeated measures on the last factor, were conducted. Results showed that positive affect and negative affect as well as behavioral disengagement, increased effort, active coping/planning, suppression, and positive reappraisal changed across the phases of the competition for athletes with high PGD whereas venting of emotion and humor changed for athletes with medium and low PGD. Multivariate path analyses were used to explore the mediating roles of coping in the PGD-affect relationship. Whereas active coping/planning and behavioral disengagement mediated the PGD-positive affect relationship during the competition, positive reappraisal mediated it at post-competition. Also, behavioral disengagement mediated the PGD-negative affect relationship during the competition. Conclusions: The moderating role of PGD on the temporal patterns of coping and affect implies that their dynamic nature might be far more complex than depicted by Lazarus and Folkman ((1984). Stress, appraisal, and coping. New York: Springer). Also, the PGD-affect relationships and the mediating role of coping in these relationships outlined the need of considering self-referenced criteria of performance in studies of coping and affect.