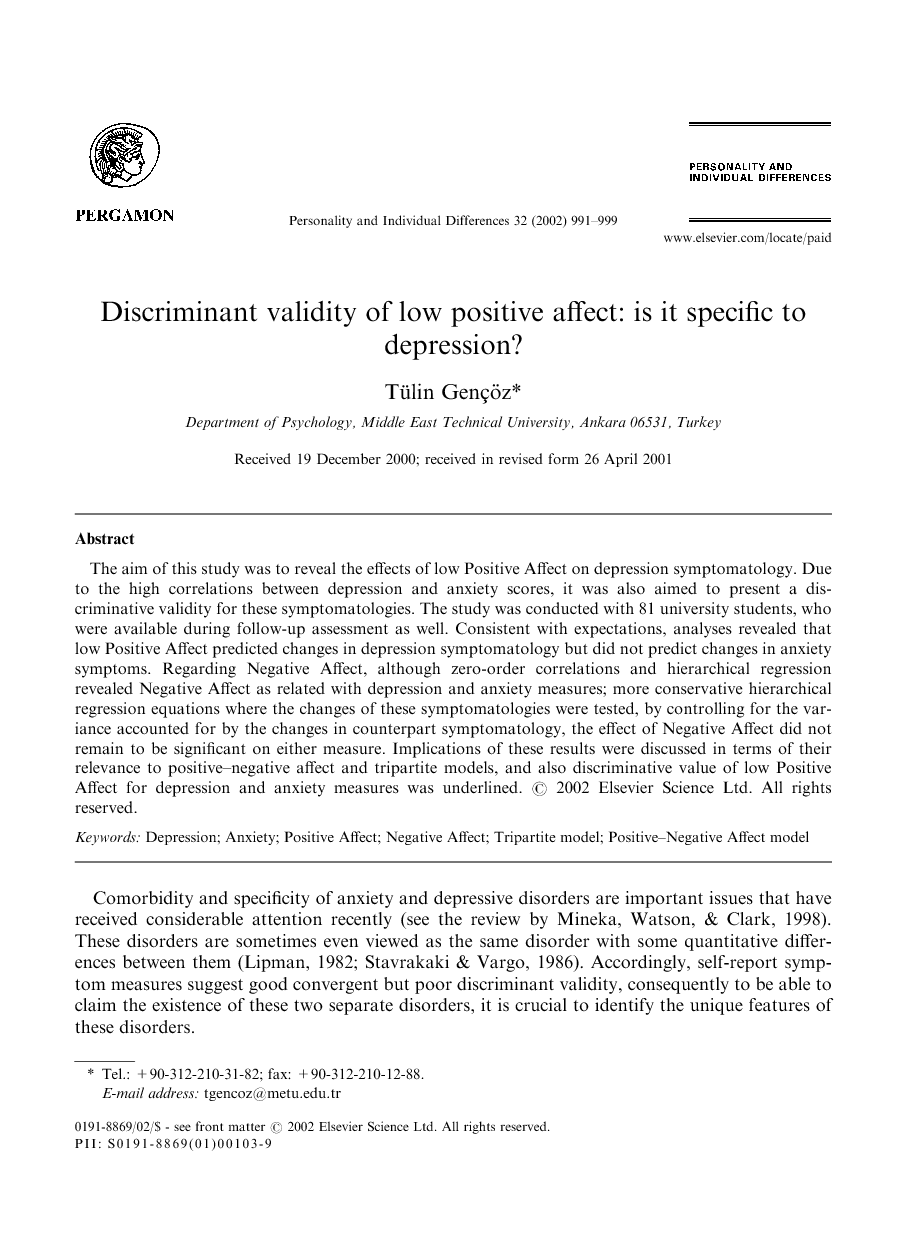 The aim of this study was to reveal the effects of low Positive Affect on depression symptomatology. Due to the high correlations between depression and anxiety scores, it was also aimed to present a discriminative validity for these symptomatologies. The study was conducted with 81 university students, who were available during follow-up assessment as well. Consistent with expectations, analyses revealed that low Positive Affect predicted changes in depression symptomatology but did not predict changes in anxiety symptoms. Regarding Negative Affect, although zero-order correlations and hierarchical regression revealed Negative Affect as related with depression and anxiety measures; more conservative hierarchical regression equations where the changes of these symptomatologies were tested, by controlling for the variance accounted for by the changes in counterpart symptomatology, the effect of Negative Affect did not remain to be significant on either measure. Implications of these results were discussed in terms of their relevance to positive–negative affect and tripartite models, and also discriminative value of low Positive Affect for depression and anxiety measures was underlined.

Comorbidity and specificity of anxiety and depressive disorders are important issues that have received considerable attention recently (see the review by Mineka, Watson, & Clark, 1998). These disorders are sometimes even viewed as the same disorder with some quantitative differences between them (Lipman, 1982 and Stavrakaki and Vargo, 1986). Accordingly, self-report symptom measures suggest good convergent but poor discriminant validity, consequently to be able to claim the existence of these two separate disorders, it is crucial to identify the unique features of these disorders. Many researchers (e.g. Beck et al., 1987, Clark et al., 1990 and Clark et al., 1994) suggest that there are specific as well as general factors in anxiety and depression. Beck and his colleagues (Beck, 1976, Beck et al., 1987, Beck and Clark, 1988, Clark et al., 1989, Clark et al., 1990 and Clark et al., 1994) suggest that these disorders are characterized by different cognitive contents; depression being associated with loss and failure, while anxiety is associated with harm and danger. Consistent with this content specificity hypothesis, depressed patients are found to be more hopeless, having lower self-worth, and possessing negative thoughts like loss and past failure; whereas anxious patients are found to possess relatively more thoughts of anticipated harm and danger (Clark et al., 1990). Still, the overlap between anxiety and depression exists both on self-report measures and clinicians' ratings though the latter one gives somewhat smaller correlations (Clark & Watson, 1991). According to Watson and Tellegen (1985) this dilemma of whether these two disorders can be discriminated or not, can be further analyzed based on affective similarities and differences between these disorders. For this reason Watson and Tellegen defines two factors; positive affect and negative affect. Although these labels give the impression that these are two opposite ends of the same continuum, Watson and Tellegen suggest that they are orthogonal factors. Positive affect covers having pleasurable experiences (e.g. being excited, enthusiastic, elated) whereas negative affect refers to feelings of upset and unpleasant arousal (e.g. being distressed, fearful, hostile). These two affects play an important role in the discrimination of depression and anxiety, with the claim that although high negative affect is the shared component between these disorders, low positive affect is relatively specific to depression (Clark et al., 1990, Clark and Watson, 1991 and Watson et al., 1988). Clark and Watson (1991) postulate a theoretical model for their view, called tripartite model. According to this model general distress (high negative affect) is the common feature of anxiety and depression, whereas anhedonia (low positive affect) is specific to depression, and physiological hyperarousal is specific to anxiety. Support for these views are mostly derived from factor analytic studies (Clark et al., 1990, Clark et al., 1994, Joiner et al., 1996 and Watson et al., 1995) in which items of different scales are factor analyzed and emerge under different factors. Although these studies report low positive affect as a specific feature of depression, it is necessary to question this point through some other methodological viewpoints. Methodologies are needed in which positive and negative affect measures are used to differentiate between anxiety and depression. Cohen and Wills (1985) suggest a regression equation where changes in dependent variable from time 1 to time 2 are aimed to be predicted through some time one measures. Consistent with this suggestion, this study aimed to predict changes in depression and anxiety symptomatologies through positive and negative affect measures, even when changes in counterpart symptomatology are controlled for. Specific predictors are that, consistent with tripartite and positive–negative affect models, Positive Affect at time one will predict depression symptomatology but not anxiety symptoms; while Negative Affect at time one will predict both depression and anxiety symptoms. On the other hand, once the changes in anxiety symptoms and sex are controlled for to predict changes in depression symptomatology (via conservative regression analysis), only specific discriminant features (i.e. low positive affect) of these symptom groups will be highlighted.